Home Home | News & Events | Response to the Report by the OSCE Representative on Freedom of the Media, Teresa Ribeiro 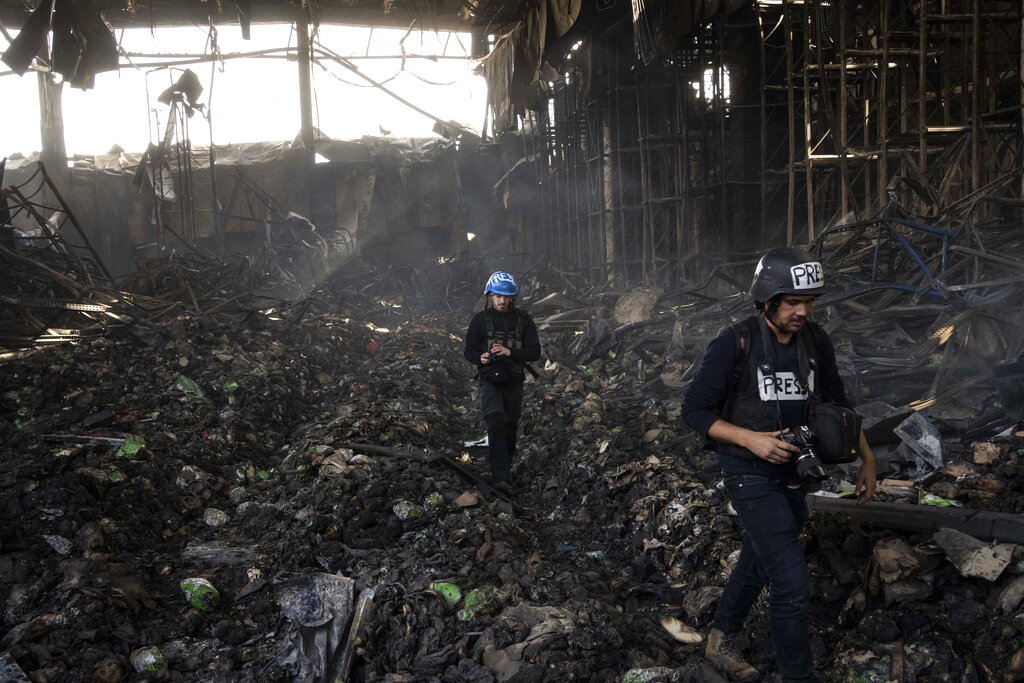 FILE - Journalists walk inside a destroyed warehouse for storing food, after an attack from Russia twelve days ago in Brovary, on the outskirts of Kyiv, Ukraine. (AP Photo/Rodrigo Abd, File)

Response to the Report by the OSCE Representative on Freedom of the Media, Teresa Ribeiro

We warmly welcome back to the Permanent Council the Representative on Freedom of the Media.  Dear Teresa, thank you for your solid report.  I think it is fair to say that the situation with regards to media freedom in the OSCE region has gone from terrible to worse than terrible.  With the onset of Russia’s unprovoked war against Ukraine, we are witnessing Soviet-era levels of repression against journalists, coupled with propaganda and disinformation that even Orwell would have found incredible.

It is important to speak about specific cases of repression because while the overall trends can be nicely summed up in bar charts, the individual cases really tell the true story.  The story of an interpreter for Radio France, who was held by Russia’s forces for nine days and, as you noted in your report, “badly beaten with an iron bar and rifle butts, tortured with electricity, deprived of food for 48 hours, and subjected to mock execution” is a horrifying testimony to how fully the forces of the Russian Federation have abandoned all of their country’s commitments to human rights and, might add, basic decency.

Independent reporting reveals at least seven journalists have been killed since February 24, with the International Press Institute reaching the chilling conclusion that these numbers are likely to be only the tip of the iceberg.  The Moscow Mechanism Experts Mission report, which only covers a small portion of the nearly three months of warfare, speaks of 21 journalists unjustly detained within the areas controlled by Russia, with the fate of many of them unknown.  Russia is working to hide its atrocities—using gruesome methods such as the deployment of mobile crematoria, and today, I hear reports of using chlorine in mass graves—to erase any objective reporting from within Ukraine and keep the enormity of its losses from its own citizens.

Finally, you document the terrible state of freedom of expression within Russia itself, where independent voices have been silenced with threats of massive fines and prison terms.  Journalists cannot even use the term “war” or “invasion” to describe Russia’s attack on Ukraine because doing so would result in prison sentences of up to 15 years.  Editorial writer Vladimir Kara-Murza is among the hundreds who have already been charged under this troubling law.  We urge Russian authorities to end the politically motivated prosecution of those who speak out against Putin’s unjustifiable war.  These threats, combined with the totalitarian “Foreign Agent Laws,” have led to numerous independent outlets ending operations within the country, such as Ekho Moskvy, Dozhd, Meduza, RFE/RL, and Novaya Gazeta.  Journalists who do not toe the Kremlin’s line, such as Nobel Peace Prize winner Dmitry Muratov, are subjected to intimidation and assaults by Russia’s security forces.  The internet in Russia has been censored, with Facebook, Twitter, and the websites of virtually all independent Russian news outlets blocked so that the people of Russia are unable to learn what is being perpetrated in their name. Foreign broadcasters too, such as BBC and CNN, have been removed from cable and television services.  Any voice that could possibly disagree with the Kremlin’s lies has been silenced or censored.

The Putin regime designed these actions to keep the people of Russia in the dark about events in Ukraine.  Instead, they are fed a steady stream of lies about supposed “Nazis” in Ukraine, not the reality of war crimes committed by Russia’s forces.

While the eyes of the world have been focused on events in Russia and Ukraine, other participating States in the OSCE, such as Belarus, have taken the opportunity to further restrict freedom of expression, curtail media freedom, and politically target journalists for reprisal, including imprisonment.

Belarus’s recent legislation allowing for the death penalty in cases of “attempted acts of terrorism” are clearly an attempt to threaten pro-democracy and anti-war activists opposing Belarus’ involvement in Russia’s unprovoked war in Ukraine.  The regime has long been using fabricated “extremism” or “terrorism” charges to imprison those who peacefully exercise their human rights and fundamental freedoms to express dissent with the regime. Combined with legislation currently being considered that would allow for trial in absentia, it is not hard to see that the Lukashenka regime is also trying to silence Belarusian journalists and pro-democracy activists located abroad.

We continue to bring attention to the many journalists unjustly detained in Belarus, including Ihar Losik, who is serving a 15-year prison sentence in a maximum security prison in connection to his work on his popular Telegram channel;  Katsiaryna Andreyeva and Daria Chultsova, who are serving 2 years imprisonment for their live broadcast coverage of the regime’s violent crackdown on peaceful protesters; and many, many others.

Dear Teresa, your office and the participating States in this Council must remain vigilant in protecting the right to freedom of expression.  Now, more than ever, an independent, unbiased watchdog is needed to keep vigil over the state of media freedom and the safety of journalists in the OSCE region, and we reiterate our support for the work you and your staff are doing.