Home Home | News & Events | Response to the Report by the Special Rep. of the OSCE CiO in Ukraine and the TCG & the Chief Monitor of the OSCE SMM to Ukraine 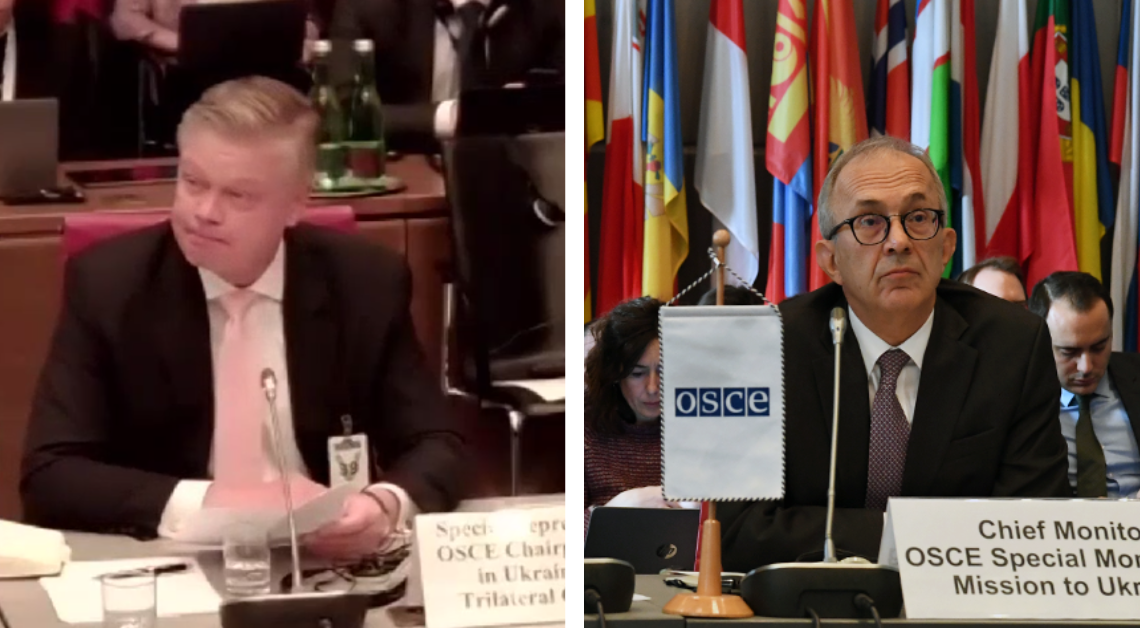 to the Permanent Council, Vienna
October 7, 2021

Ambassadors Cevik and Kinnunen, the United States welcomes you back to the Permanent Council.  We are grateful for your tireless efforts to bring about a peaceful resolution to the conflict instigated and led by Russia in eastern Ukraine.  Having listened closely to your presentations today, I think we all have a deeper appreciation for the difficulty and complexity of both your roles and how the SMM and TCG play critical and complementary roles in trying to stop this deadly conflict.

Ambassador Cevik, you opened your most recent report with a concise state of play, noting the situation on the ground remains concerning.  A fragile security situation, an increase in Minsk-proscribed weaponry, and a significant increase in civilian casualties due to shelling and small-arms fire, as well as damage to civilian infrastructure; and Russia-led forces’ ongoing blockage of the Entry-Exit Crossing Points that limit civilians’ movement within their own country.  Additionally, you highlighted Russia-led forces’ continued obstruction of SMM movements and the targeting of unmanned aerial vehicles.

We appreciate that even as the SMM reports detail a steady increase in ceasefire violations over the last reporting period, your team is careful to place such statistics in context, making clear that even with the increase, the levels of violence are still below what they were prior to adoption of additional measures to strengthen the ceasefire.  This tells us it is still possible for Russia to decide to reverse course and meaningfully engage to stop this deadly conflict.

We applaud the return of SMM’s long-range UAV missions and welcome learning from future reporting.  By addressing the issue of jamming, the SMM demonstrated commendable adaptability to an ever-changing situation.  We all depend on the SMM and its dedicated monitors to deliver the impartial reports, which provide an accurate view of the situation on the ground.  Their unbiased nature allows readers to make their own conclusions based on facts.  And the facts demonstrate Russia’s aggression is the driver of this conflict.

Russia-led forces interfere with SMM monitor movements across the Line of Contact and across the so-called inter-oblast boundary line between Donetsk and Luhansk, despite the SMM’s mandate to monitor throughout all of Ukraine, which includes Crimea and the Russia-Ukraine border.

Ambassador Kinnunen, we value your dedication, optimism, and most of all, patience in your work at the TCG. We all know that linking political and security issues prevents real progress on confidence-building measures.  Unfortunately, we are all aware that Russia’s desired end-state is one that legitimizes its violations of Ukraine’s sovereignty and territorial integrity.  Nonetheless, we must insist that efforts continue to identify areas in which incremental progress is possible, in order to mitigate—as much as we can—the grave and ongoing human costs of this conflict.

Progress depends on Russia’s political will, which we hope we begin to see.  The additional measures to strengthen the ceasefire have saved lives, reduced human suffering, and demonstrated progress was possible.  We call on Russia to demonstrate such political will again.  While we all deeply desire a Russia that participates meaningfully in peace negotiations, at a bare minimum, Russia and the forces it funds, equips, trains, and leads need to abstain from violence in the meantime.

Ambassadors, please know you have the full support and confidence of the United States.  Again, thank you for your important work.

Madam Chair, the United States fully supports Ukraine’s sovereignty, independence, and territorial integrity within its internationally recognized borders, including its territorial waters.  We do not, nor will we ever, recognize Russia’s purported annexation of Crimea.  We renew our call for Russia to immediately release Deputy Chairman of the Crimean Tatar Mejlis Nariman Dzhelyal and the other over 100 Ukrainian political prisoners it holds, and to end its campaign of repression against the Crimean Tatar community and members of other minority groups. We join our European and other partners in affirming our Ukraine-related sanctions against Russia will remain in place until Russia fully implements its Minsk commitments and returns full control of Crimea to Ukraine.