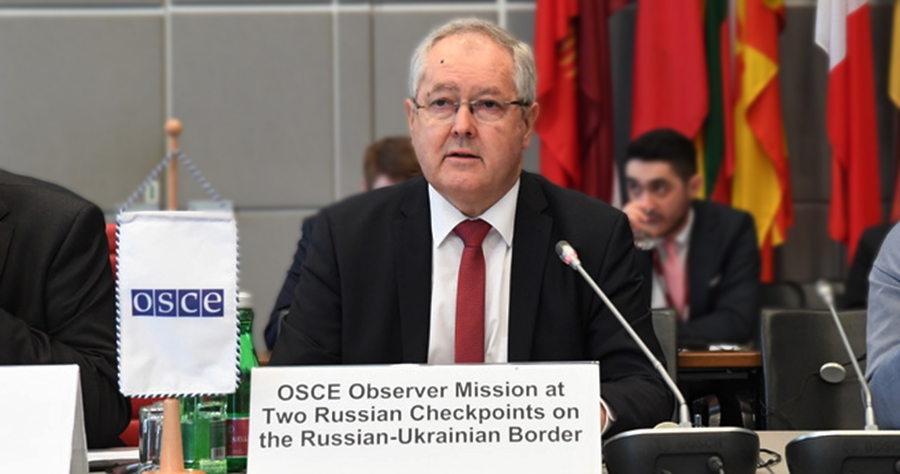 The United States welcomes Head of Mission Varga to the Permanent Council. Ambassador, we commend you and your team for your continued efforts under particularly challenging conditions.  We were pleased to learn nearly 80 percent of the Observer Mission staff have been vaccinated.

Ambassador Varga, the United States and other participating States consistently call for the geographic expansion of the Observer Mission, which Russia limits to just two of the 11 Border Crossing Points along the nearly 400 km-long internationally recognized border of Russia and Ukraine.  In addition, Russia confines Mission Observers to certain areas and limits their Freedom of Movement; at the same time Moscow prohibits the use of binoculars or cameras.

We regret the Mission remains limited in terms of its geographic scope and its mandate period.  Russia’s recent efforts to reduce the mandate period from four to two months will further hinder the work of your team, placing further burdens on its modest staff already dealing with complex bureaucratic requirements.

Ambassador Varga, yours is a wide-ranging and consequential mandate.  As noted in your most recent report, the Mission has observed the movement of nearly 24 million persons since 2014.  Nearly 40,000 of those individuals wore “military-style” outfits, revealing the nature of Russia’s involvement in eastern Ukraine.  You observed more than 287,000 vehicles crossing into, or out of, Ukraine via a border that is essentially unsecured and is most certainly not under Ukraine’s control.

In the most recent reporting period alone, you observed the movement of more than 939,000 people, including 150 individuals wearing military-style outfits, many displaying badges with emblems for the “DPR”, “LPR,” or even “NovoRossiya”—entities with no legitimacy in the eyes of the international community.  Along with the 21,325 vehicles observed, these figures represent a small fragment of the total traffic crossings between Russia and Ukraine—the majority of which likely occur outside established border crossing points.  Yet, despite Russia’s efforts to limit your operations, your valuable work still provides participating States detailed insights into Moscow’s ongoing aggression against Ukraine.

The United States reminds our Russian colleagues the Minsk agreements, to which they are a signatory, call for the permanent monitoring of the Russia-Ukraine border.  We remind Russia of the principles to which it committed as an OSCE participating State, namely those enumerated in the Helsinki Final Act, which include respect for the sovereignty and territorial integrity of other states, refraining from the threat or use of force, and the inviolability of international borders.

The United States joins the other participating States in calling for Russia to allow for the geographic expansion of this important mission.  We further call on Russia to afford the Observer Mission the unobstructed Freedom of Movement it needs to effectively report on the situation at all Border Crossing Points along the internationally-recognized Russia-Ukraine border.  Finally, we call on Russia to cease obstructing the Mission from fully executing its mandate and join consensus on a six-month extension.

Ambassador Varga, thank you to you and your team for your continued efforts during this particularly difficult period.  You have our full support.