Home Home | News & Events | Response to the Report of the Head of the OSCE Mission to Bosnia and Herzegovina, Kathleen Kavalec 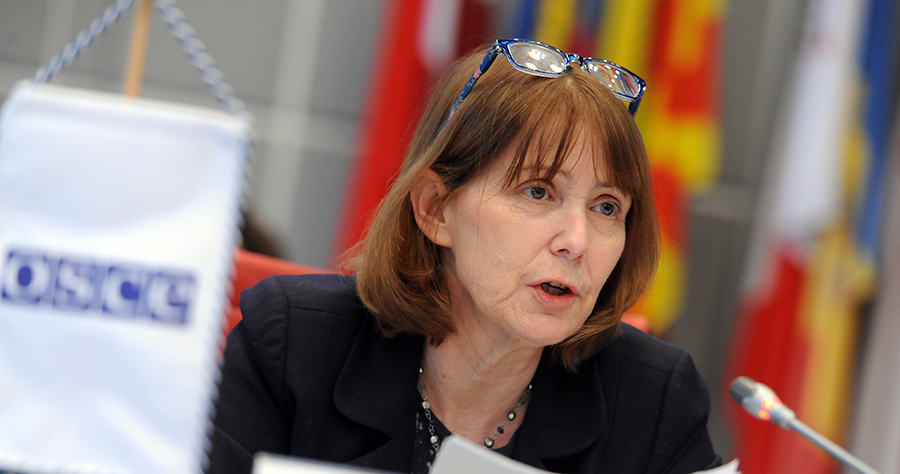 Ambassador Kavalec, the Head of the OSCE Mission to Bosnia and Herzegovina, speaks to the Permanent Coucil on developments In the country and the Mission's work. (OSCE/Kroell)

Response to the Report of the Head of the OSCE Mission to Bosnia and Herzegovina, Kathleen Kavalec

Ambassador Kavalec, dear Kathy, welcome back to the Permanent Council.

Thank you for your work to facilitate dialogue and social cohesion across the full spectrum of political actors in Bosnia and Herzegovina, for your tireless efforts to support election reform and democratic governance, and for your leadership on fighting corruption. We also commend you for maintaining a visible presence throughout the country via your field offices in the face of the pandemic and a deteriorating political environment.

I want to start by saying that the United States is extremely concerned by the worsening political climate in Bosnia and Herzegovina. The rise in divisive and escalatory rhetoric, the insistence by some political forces in Republika Srpska on trying to create parallel institutions that undermine the cohesion of the state, and the often-dysfunctional relationship between political actors in the Federation of Bosnia and Herzegovina brings us increasingly closer to a full-blown political crisis. The main losers in this political crisis are the citizens of Bosnia and Herzegovina.   The Permanent Council has correctly focused during the past five weeks on Russia’s unprovoked and destructive war in Ukraine.  But we cannot fail to address concerning developments elsewhere in the OSCE region.

We urge all leaders in Bosnia and Herzegovina to stop using divisive and inflammatory rhetoric, to resume working within state institutions, and to channel their energies towards resolving disagreements through existing political channels.  In just the last year, the United States has taken the very serious step of applying sanctions to a number of political leaders in Bosnia and Herzegovina whose actions have run counter to the principles of democratic governance.  All of us in this Council must signal that enough is enough when it comes to secessionist rhetoric and corrupt backroom dealings.  The focus now should be on improving the effectiveness of governance institutions and moving forward on reforms that will promote stability, prosperity, and a European future for the citizens of Bosnia and Herzegovina.

Ambassador, your Mission plays a critical role in pushing for these reforms, and we remain a strong advocate of your work.

I want to especially highlight the work your team has done to increase the legitimacy, transparency, and integrity of elections.  The United States agrees it is essential that the Mission continue to assist the Central Election Commission so it can implement ODIHR’s electoral reform recommendations before the October elections.  To support this effort, we are pleased to contribute 430,000 euro to your Mission’s electoral reform project designed to support Bosnia and Herzegovina implement ODIHR recommendations.  We strongly urge all other interested delegations to also contribute so the election commission has the necessary tools in place in a timely manner.  Given that your report notes the political attacks on the Central Election Commission and the challenges it faces, could you share with us your assessment of preparations for the October elections and the prospects for their effective and transparent administration?

Ambassador Kavalec—Kathy—thank you again for your service as Head of Mission in Sarajevo.  We greatly appreciate your dedication and diligence in very challenging conditions to benefit all the people of Bosnia and Herzegovina.