Home Home | News & Events | Response to the Report of the Head of the OSCE Mission to Serbia, Ambassador Jan Braathu 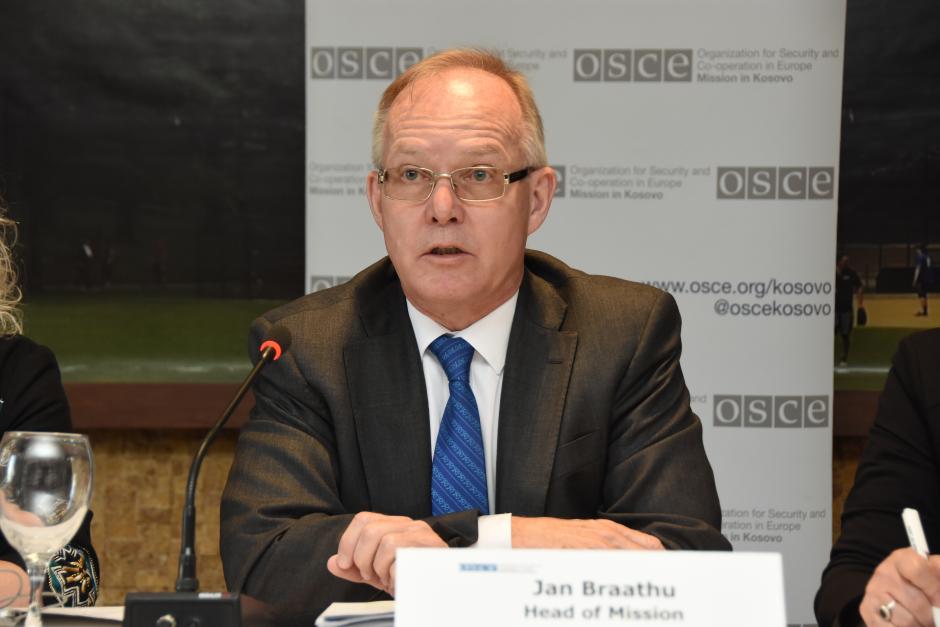 Response to the Report of the Head of the OSCE Mission to Serbia, Ambassador Jan Braathu

Ambassador Braathu, the United States warmly welcomes you back to the Permanent Council, and for the first time in your new role.  While 2020 was a challenging year for all of us, your team showed flexibility in pivoting to holding activities online and continuing substantive work on a range of topics.

Serbia’s June 2020 parliamentary, provincial, and local elections, conducted amidst the current, difficult pandemic conditions, resulted in the highest number of women ever elected to the Serbian National Assembly. The elections also yielded the highest-ever percentage of MPs under the age of 30, as well as first-time MPs.  In the run up to future elections, we urge Belgrade to work with the Mission and others to implement the recommendations in ODIHR’s Final Election report (and earlier reports).

The report identified serious shortcomings in the unbalanced media environment and the advantage enjoyed by governing parties, an observation echoed by the European Commission’s 2020 report. Recommendations on election administration, media, campaign finance, dispute resolution, and sanctions for electoral violations remain to be addressed.  We are pleased Prime Minister Brnabić, as a first step, reached out to ODIHR and the Mission to resume work on addressing those recommendations.  We stress the importance of moving quickly so that any changes can be enacted well in advance of the next elections, expected in 2022.  Elections are the bedrock of democracy, and ensuring a strong electoral system and process is intrinsic to a strong democratic system.

The United States supports Serbia’s strategic goal of European integration, and sees your Mission as playing a vital role in assisting in the reforms critical to Serbia’s EU accession.  We were disappointed Serbia did not make greater progress in the areas of media pluralism, strengthening democratic institutions, regional reconciliation, anti-corruption, rule of law, and judicial independence to warrant the opening of new negotiation chapters in 2020.  We note that President Vucic and other Serbian officials have committed to make substantial progress on rule of law reforms in 2021, and we encourage Serbia to undertake the structural reforms necessary to ensure the independence of its judiciary.  Constitutional amendments related to the judiciary are essential to build a truly independent judiciary free from political influence.  We hope that the process in which Serbia develops and adopts constitutional amendments going forward will take citizen and expert input into account.  We look forward to Serbia building momentum along its European path this year by adopting reforms identified by the European Commission in its 2020 report on Serbia.

We appreciate and strongly support the Mission’s work on strengthening a pluralistic and transparent media environment in Serbia.  In supporting the Serbian government’s implementation of the Media Strategy adopted in January 2020, your assistance is critical.  We remain concerned about the Safety of Journalists and an environment that does not allow free media to flourish.  A transparent, broad media environment is central to any democracy.  We recognize your Mission’s efforts to foster this type of environment in Serbia but believe the government could take a firmer stance in showing that threats and attacks on journalists will not be tolerated.  Threats against civil society and efforts to portray civil society as enemies of the government or of Serbia should not be tolerated.

The United States strongly supports a democratic, prosperous, and peaceful future for the Western Balkans and recognizes Serbia’s important role in this.  We encourage Serbia to take steps to normalize relations with Kosovo.  The United States fully supports the EU-facilitated Dialogue between Kosovo and Serbia aimed at a comprehensive normalization agreement, which should be centered on mutual recognition.  We understand this will require compromise by both sides.  The status quo is unsustainable, and it prevents both Kosovo and Serbia from reaching their full potential.

Ambassador Braathu, your extensive experience in the region and effective leadership of the OSCE Mission in Kosovo will undoubtedly contribute to you and your team’s success in Serbia.  We thank you and your team for the work you have accomplished, and the work ahead in the areas already mentioned: combating corruption and organized crime, promoting sound environmental practices, advancing the human rights of members of minorities, gender equality, tolerance and non-discrimination, youth participation and more.  You have our full support.