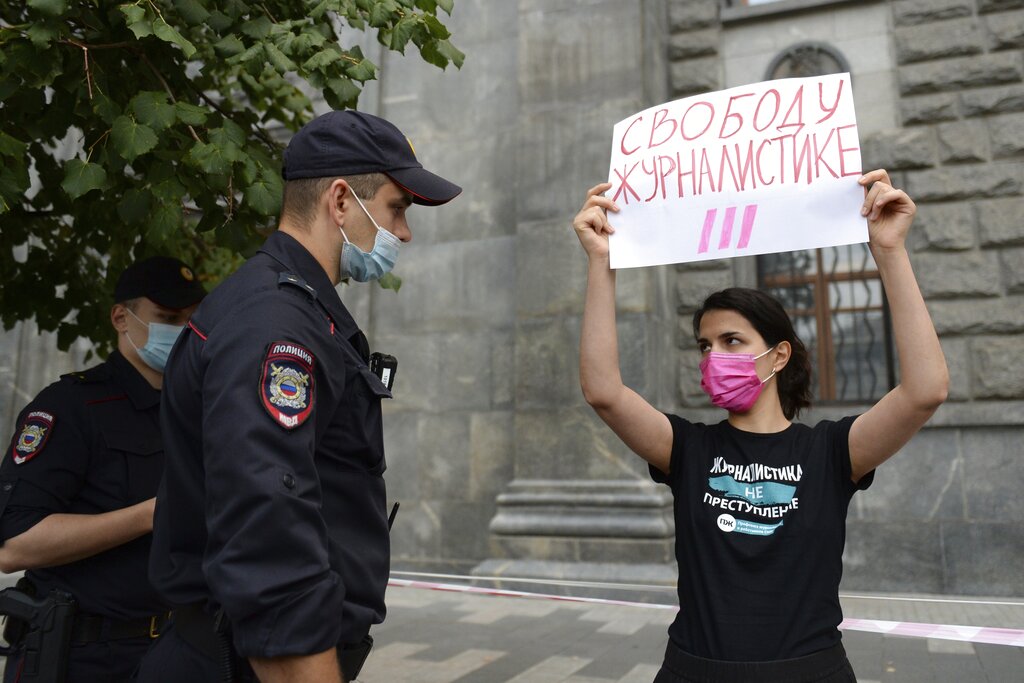 The United States welcomes the OSCE Representative on Freedom of the Media, Teresa Ribeiro, back for her second report.  During this period, you visited Washington and spoke with civil society, diplomats at the State Department, and parliamentarians of the U.S. Helsinki Commission, all of whom expressed their support for the work you and your dedicated team do to promote media freedom and the safety of journalists.  Your institutional independence and expertise are essential.

As your report points out, in a year in which journalists Maria Ressa and Dmitry Muratov won the Nobel Prize, it is still the case that across the OSCE region, journalists and independent media organizations remain under attack.  At least three journalists were killed in this region since Representative Ribeiro last spoke to this Permanent Council.  We join you in expressing condolences to their families, and firmly believe we must all work harder to put the commitments we made in the 2018 Milan Decision on Safety of Journalists into practice.

Representative Ribeiro, we appreciate your focus on the negative impact of Russia’s “foreign agent” laws on freedom of expression.  Sadly, the ninth anniversary of the promulgation of these laws occurred last Sunday, and with each passing year the Russian government applies this legislation more broadly, resulting in more independent voices being silenced.  We will speak more on this topic later in today’s Permanent Council.

Unfortunately, I do feel the need to respond to some of the issues raised by my esteemed Russian colleague earlier this morning.  First, I would argue that he has mischaracterized the U.S. reaction to the closing of the Kyiv Post.

As well, my Russian colleague asserted that the United States somehow has control over internet platforms such as Facebook, YouTube, and Twitter.  As we are all aware, these platforms have been more clearly labeling when a source is government-controlled, closing accounts when government actors have been posing as something other than what they are, and when account holders violate the site’s terms of service, especially when they spread misinformation about the COVID pandemic.  We hope the Russian government appreciates these efforts to limit disinformation.

When it comes to the closure of accounts these commercial platforms make these moves completely independent of the U.S. government and not as a result of any U.S. law or regulation.

Furthermore, The United States reaffirms our unshakable belief that a free press is essential to an informed citizenry. And I assure you that the United States is committed to protecting the safety of members of the press and holding accountable those who violate the law, including law enforcement officers. I assure you there is no law in the United States that suppresses journalists, or prosecutes them for reporting or expressing their views.

The United States takes freedom of the press seriously and is thankful for the invaluable role journalists play in a free society. It is not and has never been the policy of the United States to target individuals for exercising their freedom of expression, including their reporting as journalists.
And with regards to Julian Assangge, the United States seeks to prosecute Mr. Assange for his alleged crimes, not for being a journalist. The totality of Assange’s conduct as alleged in the indictment includes conspiring with and assisting Chelsea Manning in acquiring classified information, and publishing the names of human sources, recklessly placing them at grave risk.

As alleged in the indictment, no responsible actor—journalist or otherwise—would have behaved with such wanton disregard for the lives of others. The United States seeks to hold Julian Assange responsible for the full breadth of his illegal conduct in this case. In doing so, Mr. Assange will be provided all required constitutional and legal protections in compliance with U.S. domestic laws and our international obligations and commitments.

Representative Ribeiro, your report rightly spotlights the crackdown on independent media in Belarus, where the Lukashenka regime continues to subject journalists to arbitrary searches, detention, prosecution, and imprisonment for their reporting on the repression ongoing within the country.  Just ten days after your last appearance at the Permanent Council, Belarus diverted Ryanair flight 4978 from its route to Vilnius, forcing it to land in Minsk, using the false report of a bomb on-board in order to arrest journalist Roman Pratasevich.  In the months that followed, the regime routinely forced Mr. Pratasevich to appear on camera and before the press in scenes reminiscent of some of the worst show trials of the Stalinist era.  According to the independent civil society organization Reporters without Borders, one of the casualties of this campaign was the closure of the Belarusian Association of Journalists, an independent organization that had been working in the country since 1995.  Representative Ribeiro, we appreciate your continued monitoring and reporting on the troubling state of freedom of expression within Belarus.

Representative Ribeiro, we are glad to see the return of the programs run out of your office, as the situation with COVID allowed hybrid participation in conferences and seminars.  In particular, your work on disinformation strikes us as particularly important.  Among its many damaging effects, disinformation can place journalists in danger.

Your work in Central Asia, including your Judicial Conference and Media Conference, demonstrates your continuing commitment to work in an important region of the OSCE.  I would like to ask, do you have any new programs in store for 2022?

Ms. Ribeiro, the United States continues to support the work you do defending freedom of expression, both online and offline.  We join you in your repeated call for all journalists who are unjustly held across the OSCE region to be released.