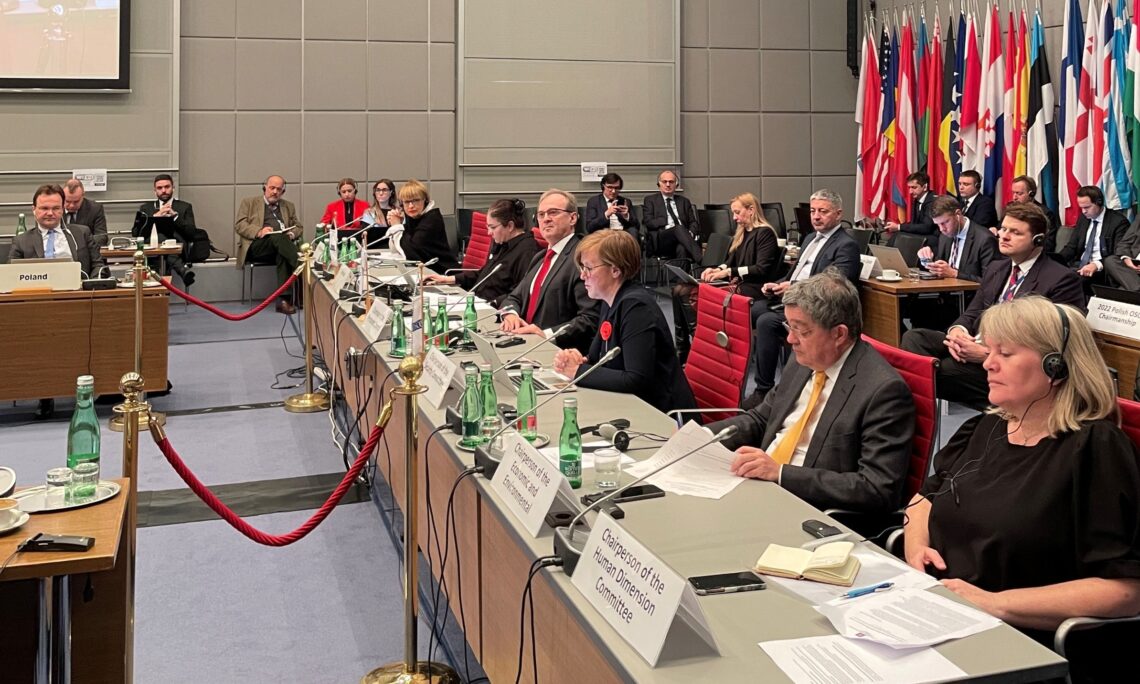 Thank you to our three phenomenal committee chairs, Ambassadors Kinnear, Raunig, and Karlsen for your excellent reports. (©Polish OSCE Chairmanship 2022)

Response to the Reports of the Chairs of the Three Committees: the Security Committee, the Economic and Environmental Committee and the Human Dimension Committee

Thank you to our three phenomenal committee chairs, Ambassadors Kinnear, Raunig, and Karlsen for your excellent reports.  This last year was unprecedented for the unity displayed by the participating States. The overwhelming majority, all but two, joined forces to help Ukraine and its neighbors cope with the impact of Russia’s brutal aggression and to hold Russia and its enabler Belarus to account.  This work was supported by the efforts of all three committees.  At this Council on April 7, each of you quickly and nimbly adapted your workplans to focus our shared tools and deliberations to respond to the region’s greatest threat – Russia’s brutal aggression against Ukraine.

Ambassador Kinnear, dear Jocelyn, thank you for your leadership of the Security Committee this year.  Your stewardship of theCommittee drew attention to the need to provide concrete support to Ukraine to protect critical infrastructure such as hospitals, water and sanitation plants, and nuclear facilities.  We value your focus on the role of technology in preventing human trafficking and effective border management given the challenges Ukraine is facing because of Russia’s unprovoked war of choice.  We look forward to engaging on these and other issues such as transnational organized crime and Russia’s attempt as part of its disinformation campaigns to twist the narrative on the threat of violent extremism in the region to further its predatory designs on Ukraine.

Ambassador Raunig, dear Florian, your experienced leadership of the Economic and Environmental Committee examined the economic and environmental consequences of Russia’s aggression against Ukraine for both Ukraine and the entire OSCE region.  We welcomed the discussions of critical energy infrastructure, food security, and the sustainable management of natural resources in the context of the war.  These topics, along with economic connectivity, sustainable supply chains, good governance, combating corruption, and addressing the negative consequences of climate change, should form the basis of the committee’s work in 2023 even as we collectively maintain a continuous focus on Russia’s assault on Ukraine.

Ambassador Karlsen, dear Anne-Kirsti, under your leadership, the Human Dimension Committee exposed the tremendous human suffering in Ukraine at the hands of Russia’s forces.  The ad hoc committee meeting on March 22 was the first to focus on the impact of Russia’s invasion, specifically, on gender-based violence, including conflict-related sexual violence, in the emerging stories of the horrors inflicted on Ukraine’s women, men, and children.  We found it particularly useful that Norway brought so many speakers from Ukraine to Vienna so that the Committee could hear firsthand about the depravity of Russia’s atrocities in Ukraine.  We also thank Norway for bringing Mr. Erik Møse, Chair of the UN Independent International Commission of Inquiry on Ukraine, to speak to the Committee.  It is important that the OSCE remain a critical part of broader accountability efforts.

Ambassadors, in the coming year, even as we rightly keep a steady spotlight on the wide-ranging effects of Russia’s aggression across all three dimensions of the OSCE, we look forward to working with each of your committees to ensure we address the full range of important concerns and challenges that fray the fabric of security in our region.

Ambassadors, you and your teams have the thanks of the United States for your leadership this year in support of the OSCE’s comprehensive concept of security.  We look forward to continuing to advance your important work in 2023 with your successors in the case of the first and third dimensions, and thank you, Florian, for your willingness to continue your stewardship of the second.