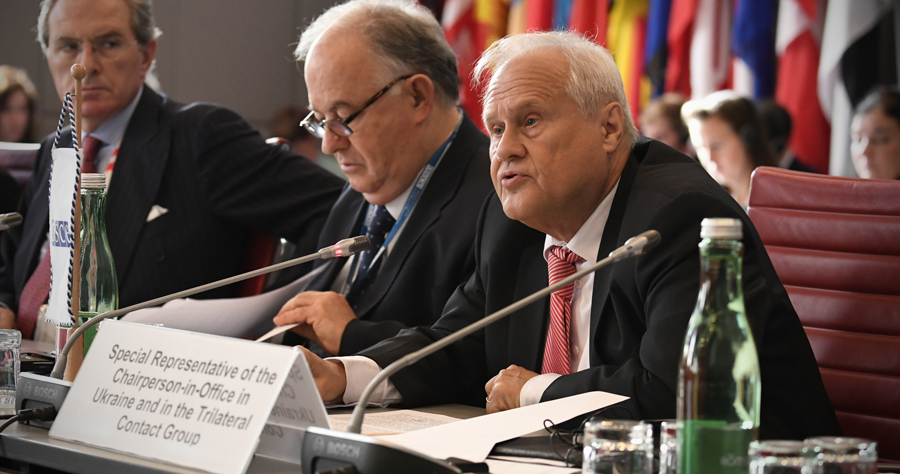 Ambassador Martin Sajdik, Special Representative of the OSCE Chairperson-in-Office in Ukraine and in the Trilateral Contact Group, reports to the OSCE Permanent Council in Vienna, Austria, on Thursday, September 28th, 2017. (USOSCE/Colin Peters)

Response to the OSCE’s Chief Monitor in Ukraine, Ambassador Ertugrul Apakan, and the OSCE Chairperson-in-Office’s Special Representative in Ukraine and in the Trilateral Contact Group, Ambassador Martin Sajdik

As prepared for delivery by Chargé d’Affaires, a.i. Harry Kamian
to the Permanent Council, Vienna
September 28, 2017

Ambassadors Sajdik and Apakan, we welcome you to the Permanent Council and commend your persistence in seeking a lasting peace in eastern Ukraine, one consistent with our OSCE principles and commitments.

The “Back to School” ceasefire has reduced violations, and we support these efforts. Only with the implementation of proper security measures – the first being a true and lasting ceasefire – can we see progress in the implementation of the Minsk agreements. While reported ceasefire violations have decreased, we are concerned that the use of heavy weapons violations still exceeds 100 per week, and there are large concentrations of proscribed weapons in areas controlled by Russia-led forces. According to Special Monitoring Mission (SMM) reporting, on September 17-18 aerial imagery showed multiple large formations of tanks and howitzers. We view these formations, and the accompanying increase in the use of proscribed heavy weapons, as destabilizing activities. We call on Russia to use its leverage with the militants it arms, trains, leads, and fights alongside to order a withdrawal of proscribed weapons in accordance with the Minsk agreements.

Ambassador Apakan, the United States believes the SMM’s efforts remain integral to resolving the conflict in Ukraine. The monitors are the eyes and ears of the international community, and we support all efforts to safeguard their safety and security in the conflict zone, as well as measures to ensure their effectiveness. We are studying your response plan to the OSCE Office of Internal Oversight’s findings on the tragic incident on April 23 that killed SMM paramedic Joseph Stone, and we welcome your commitment to communicate regularly progress on these actions to the Permanent Council. All participating States and the Secretariat should have ownership of the Mission and its wellbeing. This is our collective responsibility. We encourage member States to continue their contributions to the SMM, and to endeavor to ensure its safety and effectiveness.

Ambassador Apakan, please share with your team our appreciation for the recent reports on civilian casualties and restrictions on the freedom of movement of SMM personnel and other impediments to fulfilling its mission. We note with sadness the conflict’s 442 civilian casualties in 2016, of whom 40 percent were elderly. Unfortunately, civilian casualties this year are up 18 percent compared to 2016. Particularly concerning is civilian vulnerability at entry and exit control points, where hundreds of thousands queue every month to cross the line of contact. The control points are vital links for Ukrainians on both sides of the line, and a reminder that those in the so-called “republics” maintain strong ties to the rest of Ukraine. These areas are known to have dense concentrations of land mines, not to mention few places for civilians to take cover in the event of an exchange of fire. All parties to the conflict have agreed to cease laying mines, remove those previously installed, and mark areas known to be free of mines. The United States demands progress in this regard to reduce the risk of further fatalities, especially to children.

Civilians in non-government controlled areas of eastern Ukraine continue to suffer under Russia-led forces. The September 12 quarterly report from the UN Human Rights Monitoring Mission in Ukraine notes that UN personnel were denied access to detainees and detention centers in these territories, raising serious concerns about conditions there. We reiterate our concern about the imprisonment of those expressing pro-Ukrainian views in these territories, and call on Russia and the separatists it leads to immediately release all Ukrainians held in retaliation for their political positions, including Ihor Kozlovsky, Stanislav Aseyev, Eduard Nedelyaev, and Volodymr Fomichev.

Russia-led forces directly threatened monitors 13 times so far this year. This is a dramatic increase over the single incident during the same period last year. The SMM is an unarmed, civilian mission. Such cowardly acts contravene the mandate all 57 participating States, including Russia, gave it to have full, safe, and unfettered access throughout the entire territory of Ukraine. Perpetrators must be held to account. All participating States, in our view, should share in our rejection of any measures that prevent the SMM from fulfilling its mandate.

Moreover, the forces Russia arms, leads, trains and fights alongside continue to obstruct the freedom of movement of Mission personnel, directly undermining the SMM’s ability to build confidence on the ground. We firmly believe that Russia must allow the SMM to establish forward patrol bases on non-Ukrainian-government-controlled territory near the Russian border, and permit unimpeded access throughout all of the internationally-recognized borders of Ukraine, in accordance with the mandate Moscow approved.

Ambassador Sajdik, the United States remains a firm supporter of the Trilateral Contact Group, as well as the Normandy Quartet, as the mechanisms established to achieve the objectives set out in the Minsk agreements. As Special Representative on Ukraine Negotiations Kurt Volker has made clear, the United States is committed to Ukraine’s territorial integrity within its internationally-recognized borders and to protecting Ukrainians, regardless of their ethnic or linguistic background. Unfortunately, as you noted, the conflict has entered its fourth year, and while there is an agreed-upon path forward, Russia continues to block progress. It blocks progress on detainee exchanges, it blocks progress on the opening of the Zolote crossing points, and it blocks progress on steps to make the JCCC an effective mechanism for establishing ceasefires and for improving coordination between the sides.

We note the special report on Crimea released this week by the UN High Commissioner for Human Rights, which confirms the deterioration in the human rights situation. The United States is deeply troubled by the conviction and eight-year sentence imposed September 10 on Deputy Head of the Crimean Tatar Mejlis Akhtem Chiygoz, on politically-motivated charges related to a demonstration that took place before Russia’s occupation began. We are also concerned about the 2 ½-year suspended sentence for journalist Mykola Semena following a politically-motivated prosecution. We are equally troubled by the September 27 conviction of Crimean Tatar leader Ilmi Umerov on separatism charges and his sentence to two years in prison for his statements in opposition to Russia’s purported annexation of Crimea. We also condemn the recent abduction and apparent torture of Renat Parlamov, as well as the subsequent arrest of his lawyer and 12 others seeking information about Mr. Parlamov’s case. These are the latest politically-motivated legal actions to silence independent voices. We continue to follow the case of Oleh Sentsov, and note with concern that his current whereabouts and physical condition are unknown. We call on Russia to release Mr. Sentsov and his co-defendant, Oleksandr Kolchenko. The Russian occupation authorities should immediately cease their campaign to stifle dissent in Crimea.

Finally, Mr. Chair, the United States remains steadfast in its support for Ukraine’s sovereignty, independence, and territorial integrity within its internationally-recognized borders. We do not, nor will we ever, accept Russia’s efforts to change the borders or territory of Ukraine. We join our partners in Europe and elsewhere in affirming that our Minsk-related sanctions against Russia will remain in place until it fully implements its Minsk commitments. The separate, Crimea-related sanctions will remain until Russia returns full control of the peninsula to Ukraine.