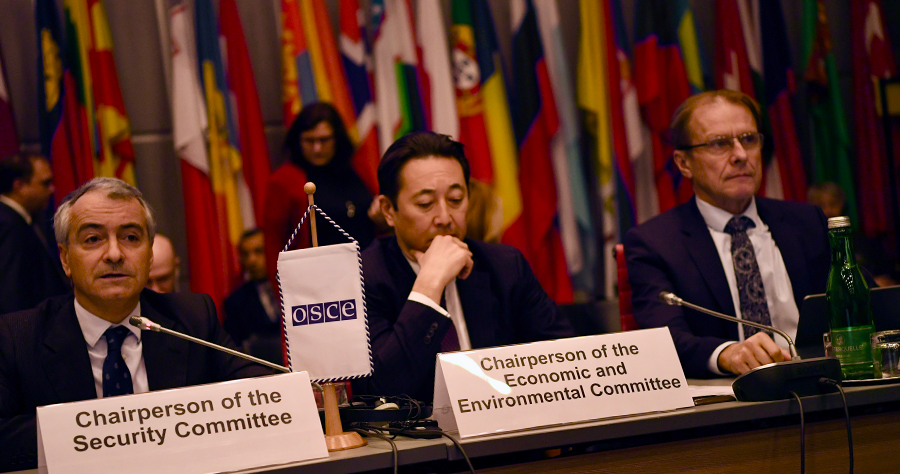 On December 9, 2019, the chairs of the First, Second, and Third OSCE Committees, Ambassadors Cuesta, Sarybay, and Šrámek, deliver their reports to the OSCE Permanent Council. (USOSCE/Gower)

As delivered by Political Counselor Gregory Macris
to the Permanent Council, Vienna
December 19, 2019

The United States welcomes the distinguished Chairs from the First, Second, and Third OSCE Committees to the Permanent Council. Thank you, Ambassadors Cuesta, Sarybay, and Šrámek, for your leadership and for promoting a collaborative approach among the committees and across dimensions.

Ambassador Cuesta, the United States appreciates your collaborative efforts to focus the Security Committee on shared interests, in pursuit of our common goal of strengthening security across the OSCE region. The United States regrets that at the recent Bratislava Ministerial Council Meeting, participating States could not reach consensus on a decision document that would have strengthened OSCE efforts to prevent and counter terrorism. My delegation and an overwhelming number of others worked in good faith on the text. It would have advanced our shared goals to promote a whole-of-society, multidisciplinary approach; foster gender equality from a security perspective; respond effectively to the threats posed by Foreign Terrorist Fighters and their families; establish national advanced passenger information (API) systems; and collect, process, and analyze passenger name record (PNR) data to counter and prevent terrorism. We appreciate your efforts to highlight through the Security Committee important cross-cutting issues, including cybersecurity, passenger data exchange, and promoting the security and resilience of soft targets and critical infrastructures. We commend your efforts to achieve consensus, and we will continue advocating for these core concerns in 2020.

Ambassador Sarybay, we wish to express our appreciation for your contributions during 2019. The Economic and Environmental Dimension is an essential component of the OSCE’s comprehensive security approach, not simply a place to build bridges or avoid potentially contentious discussions. Our citizens and the OSCE structures expect participating States to debate, identify, and address economic and environmental threats here. Recently, the Second Committee witnessed difficult discussions on energy security and digital innovation. The Ministerial Council drafts on these topics did not reach consensus, and the debates were sometimes contentious. But when the discussions were open and honest, we made progress and identified not just where divisions lie, but also where common ground could be found. Ultimately, it was not the policy discussions themselves that prevented consensus, but rather a lack of will by some to find mutually advantageous solutions. Preventing and combating corruption, especially when it is linked to organized crime, is an urgent need, as is recognizing the environmental impacts of corruption and criminality. The United States welcomes Albania’s stated focus on prioritizing the fight against corruption in 2020.

Ambassador Šrámek, thank you for your leadership this past year as Chair of the Human Dimension Committee. The United States regrets that participating States were not able to reach consensus on any Human Dimension decisions in Bratislava, despite your tireless efforts. We commend you for your strong thematic program in 2019 at Human Dimension Committee meetings. We also applaud your choice of panel speakers, always including experts from OSCE executive structures and from independent civil society. The level of voluntary reporting from participating States was also quite high. This assists States in gauging progress and highlighting the continuing implementation challenges that we must face. I encourage you to continue your leadership of the Third Committee in 2020 in the same vein.

Finally, the United States encourages each of the three committees to continue cooperation with the corresponding committees of the OSCE Parliamentary Assembly; the upcoming OSCE PA Winter Meeting in February will provide a good opportunity.

Chairs, the United States joins other delegations in expressing its appreciation for your leadership. Your committees’ work and your cross-dimensional collaboration embody the OSCE’s comprehensive concept of security, and you have our full support.