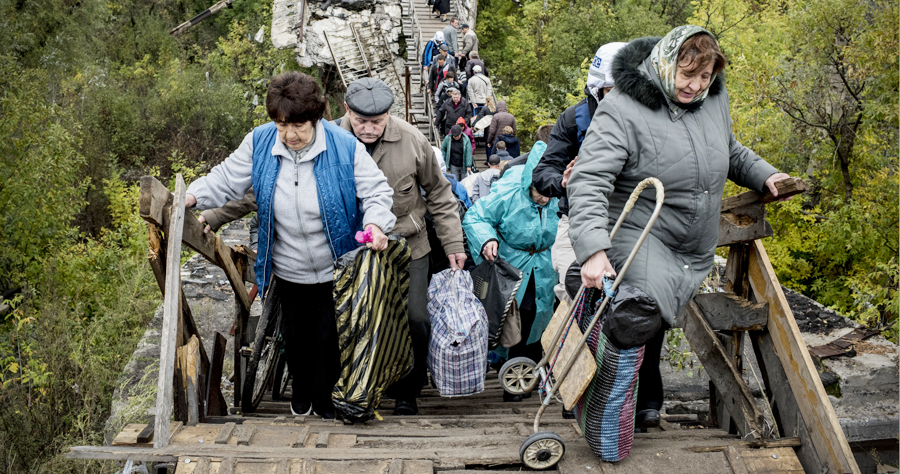 The badly damaged and increasingly perilous footbridge at Stanytsia Luhanska, Stanytsia Luhanska area, Luhansk region, 2016. Full adherence to the disengagement agreement will allow for repairs to the bridge and improve the lives of thousands of people who cross there each day. (OSCE photo)

Ambassadors Sajdik and Apakan, we welcome you back to the Permanent Council. The United States has made clear its unwavering support for those working to restore peace in eastern Ukraine. We recognize your efforts on behalf of the OSCE to restore respect for the international commitments, rule of law, and the sovereignty and territorial integrity of States.

The United States honors the memory of American SMM paramedic Joseph Stone, whose life was taken while on patrol with the SMM in territory controlled by Russia-led forces on April 23, 2017, and we pay tribute to others who bear physical and emotional scars from the incident. We also honor the sacrifices of the brave women and men of the SMM, who face violence, intimidation, and harassment on a nearly daily basis in the course of fulfilling their mandate. Ambassador Apakan, I wish to extend our sincere appreciation to the importance that you attach to ensure in the safety, security and well-being of the monitors under your leadership. You can continue to count on the United States for its unwavering political, material and financial support, to help you through these efforts. Thank you very much. Sadly, Joseph Stone’s death was more than one of a hundred tragic deaths attributed to landmines and unexploded ordnance in eastern Ukraine in 2017.

Regrettably, four years into a conflict initiated and perpetuated by Russia, SMM reports confirm the prevalence of mines in this conflict. The United States calls on all sides to fulfill their commitments under the Trilateral Contact Group (TCG) decision of March 6, 2016 to mark, fence, and map for demining all landmines in sensitive areas. These important steps would help protect civilians in eastern Ukraine.

Ambassador Sajdik, as you mentioned, two more ceasefire efforts negotiated by the TCG have come and, regrettably, gone. Russia has demonstrated that it can rein in the forces that it leads, arms, trains, and fights alongside, but as we have seen during recent recommitments to the ceasefire, it does so for diminishing periods of time. Regrettably, we are still waiting for Russia to demonstrate the political will to establish a sustained ceasefire.

The United States remains focused on the worsening humanitarian conditions brought on by Russia’s manufactured conflict. The opening of civilian crossing points along the line of contact, particularly near Zolote, remains a negotiating chip in TCG discussions, despite Russia’s pledges to take steps to address the issue. As it stands, every month over one million civilians are forced to pass too close to the fighting and use structures that are inadequate, at best. The sides have yet to clear vegetation in key areas, leaving mines masked. Regrettably, as you noted Ambassador, the TCG, mainly due to Russian intransigence, has been unable to come to terms on opening new crossing points along the line of contact.

Progress at the TCG has stalled over the establishment of safety zones around critical civilian infrastructure. Given the interdependence of the water, electric, and mobile phone services on both sides of the contact line, it is only a matter of time until Russia’s aggression results in a catastrophic humanitarian crisis in the Donbas, while the lives of workers at key infrastructure sites like the Donetsk Filtration Station remain in constant jeopardy. Safety zones around key civilian infrastructure sites are of the utmost importance to the welfare of the people living there, and we call on all sides to engage constructively in the TCG’s efforts to establish them.

The United States continues to believe the Minsk agreements are the best path to peace in eastern Ukraine. We fully support the efforts of the TCG and the Normandy Quartet to achieve the objectives set out in the Minsk agreements. We wait for Russia to deliver on its commitments to build, rather than undermine, a Europe that is strong and free.

Ambassador Apakan, we welcome the submission of your timely and detailed report to the Council and the SMM’s continued constructive role in the conflict. Your timely and detailed report, together with your informal briefing yesterday and your presentation today, are testament to your commitment to keeping the Permanent Council informed of the important activities of the SMM, and we commend you for these efforts. Ambassador, we take special note of the critical role your Mission played in the restoration of service at the Donetsk Water Filtration Station. In particular, the United States commends the conduct of your deputy, Alexander Hug, and teams in the field who negotiated the security guarantees needed to resume water service to the nearly 350,000 residents dependent on the station. Ambassador, we note the reality that Mr. Hug will soon reach the limit of his OSCE service, and a search is underway for his successor. The United States stresses the importance of finding a candidate with the drive, persistence, and creativity needed to play such a vital role.

We note the additional burden Russia’s unilateral withdrawal from the Joint Center for Coordination and Control (JCCC) in December 2017 has placed on the SMM. According to your report, only 48 of the 152 requests for security guarantees for work on critical infrastructure were issued in the reporting period, despite their importance to improving humanitarian conditions in the conflict zone. Ambassador, we once again applaud your efforts and successes in managing to work without a Russian JCCC contingent and we again call upon Russia to return to the JCCC, a body that can make a substantive contribution to improving the humanitarian conditions for the people on the ground.

SMM patrols and operations continue to meet interference and restrictions that violate its mandate. Since your last Council report, SMM patrols have encountered 180 access restrictions, all but 12 of which occurred in territory controlled by Russia’s proxies. The report details systematic restrictions along the border between Russia and Ukraine and nearby rail stations. Additionally, SMM UAV operations meet with consistent obstruction and interference. We echo your calls for the signatories to the Minsk agreements to ensure unrestricted and secure SMM operations, including the UAV flights. The United States calls upon Russia to use its leverage to end restrictions on and interference with SMM patrols, which contravene the mandate that has gained consensus here every year.

Ambassador Apakan, we welcome the announcement that you have signed the documents produced by the SMM Task Force to Align Operations and Security Issues as well as the SMM’s Gender Equality Action Plan. We look forward to continued updates on the implementation of these documents, which underpin the SMM’s vitality.

Mr. Chair, I noted that the esteemed Russian Ambassador mentioned the importance that Russia reportedly attaches to human rights. Not surprisingly, the Russian ambassador neglected to mention the ongoing harassment and politically-motivated prosecution of the Crimean Tatars and others who oppose Russia’s occupation of Ukraine’s Crimean peninsula. And the United States wishes to reiterate its call on the Russian Federation to end its repression of the occupied Crimea and return control of the peninsula to Ukraine.

Finally, Mr. Chair, the United States is resolute in its support for Ukraine’s sovereignty, independence, unity, and territorial integrity within its internationally-recognized borders. We do not, nor will we ever, recognize Russia’s purported annexation of Crimea. Crimea-related sanctions on Russia will remain in place until Russia returns full control of the peninsula to Ukraine. And we join our European and other partners in restating that our sanctions against Russia for its aggression in eastern Ukraine will remain until Russia fully implements its commitments under the Minsk agreements.