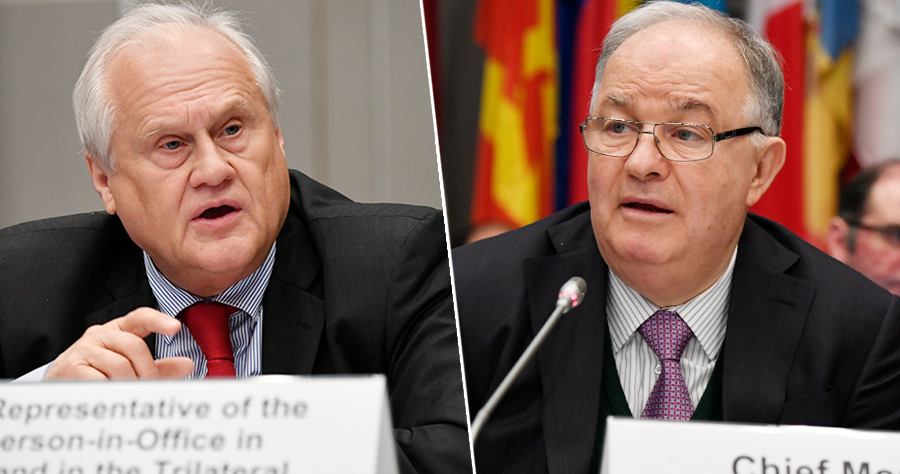 Response to the Reports by the OSCE’s Chief Monitor in Ukraine, Ambassador Ertugrul Apakan, and the OSCE Chairperson-in-Office’s Special Representative in Ukraine and in the Trilateral Contact Group, Ambassador Martin Sajdik

Ambassadors Sajdik and Apakan, we welcome you back to the Permanent Council. The United States sincerely commends your commitment and persistence in seeking a lasting peace in eastern Ukraine, one that adheres to respect for international obligations and commitments, rule of law, and the sovereignty and territorial integrity of States. We strongly support your respective efforts, and you can count on our unwavering support.

Ambassadors, you join us today as we enter the fifth calendar year since Russia instigated this conflict. While we have an agreed-upon path to a peaceful outcome in the form of the Minsk agreements, progress towards this worthy goal remains elusive. The Russian Federation still refuses to take responsibility for its role in the conflict, despite the crushing weight of evidence that it arms, trains, leads, and fights alongside anti-government forces in eastern Ukraine. When Moscow signed the Minsk agreements we hoped Russia would abide by its commitments and take the necessary steps to end the bloodshed in the Donbas. What is clear after 40 recommitments to the ceasefire, however, is that Russia can rein in its forces whenever it chooses. We hear stale points about how Ukraine is on the brink of civil war and this is an internal conflict. Again, let me underscore: the starting point for a peaceful outcome in this conflict is Russian action in implementing a cease fire, disengagement of forces, and the cantonment of weapons proscribed by the Minsk agreements.

Ambassador Sajdik, the continued shelling in the vicinity of the Donetsk Water Filtration Station and other areas of critical importance is of urgent concern. On February 5, we received reports of continued shelling at the station. Any substantive damage to chlorine storage containers would result in severe health and environmental hazards, in addition to disrupting the water supply to hundreds of thousands of people on both sides of the contact line. Regrettably, due mainly to Russian intransigence, the Trilateral Contact Group (TCG) to date has been unable to come to an agreement on the establishment of safety zones around such infrastructure. These safety zones are of the utmost importance, and we call on Russia to unblock the TCG’s efforts to establish them. We believe that Russia must also engage in good faith to provide international humanitarian organizations access to detainees, to open additional crossing points, and to restore damaged mobile phone lines in the areas it controls. These simple actions would signal its willingness to engage in steps to reduce the humanitarian suffering where it is greatest in Ukraine.

Ambassador Sajdik, the United States shares your view that the Minsk agreements are indeed the best path to peace in eastern Ukraine. We support the TCG and the Normandy Quartet efforts to achieve the objectives set out in the Minsk agreements. However, contrary to the statements made earlier this morning by my esteemed Russian colleague, responsibility for the hot war that persists in eastern Ukraine rests solely and squarely with the Russian Federation. Responsibility for re-establishing peace in eastern Ukraine rests squarely with the Russian Federation. Ambassador Sajdik, you’ve often talked about political will. If the political will exists in Moscow, an end to the suffering and a re-establishment of peace, support for Ukraine within the context of its internationally-recognized borders – recognized by the international community, can indeed be achieved. We wait for Russia to deliver on its commitments.

Ambassador Apakan, the United States remains firmly committed to a robust, effective SMM as a vital tool to resolve the conflict in Ukraine. Unfortunately, I have not had an opportunity to review in depth the report that you submitted recently as the chief monitor, since I only received it last night at 7pm. However, let me offer a few general observations. First, the SMM’s steady stream of unbiased reports built on data collected by the Mission’s regular patrols are indeed the bedrock upon which we develop our understanding of the conflict. Please convey to the reporters, to the monitors, and to the teams that compile this information, that it is digested at the highest levels of the United States government and throughout the international community, and we completely support and endorse your unbiased, fact-based analysis and reporting. So, thank you very much. We welcome progress made to returning long-range UAVs to the Mission, while urging improvements that further integrate the Mission’s operations, security, and management functions. To this end, we welcome the framework policies created by the joint SMM and OSCE Secretariat task force, and look forward to more detailed reporting when the task force completes its work at the end of February. We also appreciate the continued reports of progress in implementing the action items included in your response plan to the OSCE Office of Internal Oversight’s findings on the tragic incident last April that resulted in the death of the SMM paramedic Joseph Stone.

The United States is deeply alarmed by continued reports of gunfire in the immediate vicinity of our SMM patrols, most recently on February 2. Further, as reported on February 3 and 5, and again most recently in yesterday’s report, SMM UAVs are frequently targeted. We are concerned about restrictions on monitors as they attempt to move about the area controlled by Russia-led forces. In its January 31 weekly report, the SMM reported that Russia and its forces denied access to OSCE patrols ten times, while on one occasion, Ukrainian forces denied access to a heavy-weapons holding area. These hostile actions and restrictions are blatant contraventions of the Mission’s mandate and they undermine the SMM’s ability to build confidence.

Ambassador Apakan, your mandate calls for safe and secure access throughout the territory of Ukraine, yet Russia refuses to ensure its forces uphold the mandate. Russia continues to impede your duties, with regular and blatant disregard for its commitments. The United States reiterates its call for the safe and unfettered access of SMM monitors throughout all of Ukraine, including Crimea. We also call for the SMM to be allowed to monitor the Ukrainian-Russian international border unimpeded, as called for in the Minsk agreements, and in accordance with the mandate Moscow approved.

Ambassador Apakan, we praise the SMM for its ability to adjust to the constant, difficult changes in its operating environment that you described earlier this morning. When Russia unilaterally withdrew its contingent from the JCCC, the SMM developed effective workarounds to structure the local ceasefires. These coordinated measures are required to undertake the infrastructure repairs that are so critical to mitigating the horrific conditions faced by citizens on the ground. We applaud your efforts and successes to date in managing without a Russian JCCC contingent. We maintain that the appropriate interlocutors for such issues are Russian officials, and thus Russia should return to the JCCC. And we share your hope that the ongoing discussions that are occurring in other channels do indeed prove fruitful.

The United States joins other participating States in expressing deep trouble and concern over Russia’s ongoing pressure on opponents of its purported annexation of Crimea, particularly through the growing trend of prosecuting dissidents for social media protests. We are concerned about Ihor Movenko, a Ukrainian on trial in Simferopol, who faces five years’ imprisonment on charges of “public calls to extremist activity” for a social media post criticizing the occupation authorities. Movenko was severely beaten in 2016 by a Russian policeman for displaying Ukrainian symbols on his motorcycle. We are also aware that Muslim Crimean Tatars have gone on a hunger strike in protest of the demolition of their houses and mosques in order to build a new residential settlement. These actions, and the regular searches and detentions of the Crimean Tatars and others who are critical of Russian occupation, are clear attempts to subjugate those in Crimea to Russia’s attempted annexation.

Mr. Chair, the United States again calls upon Russia to end its campaign of repression in occupied Crimea, and return control of Crimea to Ukraine. The United States is resolute in its support for Ukraine’s sovereignty, independence, unity, and territorial integrity within its internationally-recognized borders. We do not, nor will we ever, recognize Russia’s purported annexation of Crimea. Crimea-related sanctions on Russia will remain in place until Russia returns full control of the peninsula to Ukraine. And we join our European and other partners in restating that our sanctions against Russia for its aggression in eastern Ukraine will remain until Russia fully implements its commitments under the Minsk agreements.