Home Home | News & Events | Right of Reply on Freedom of Assembly in the U.S. 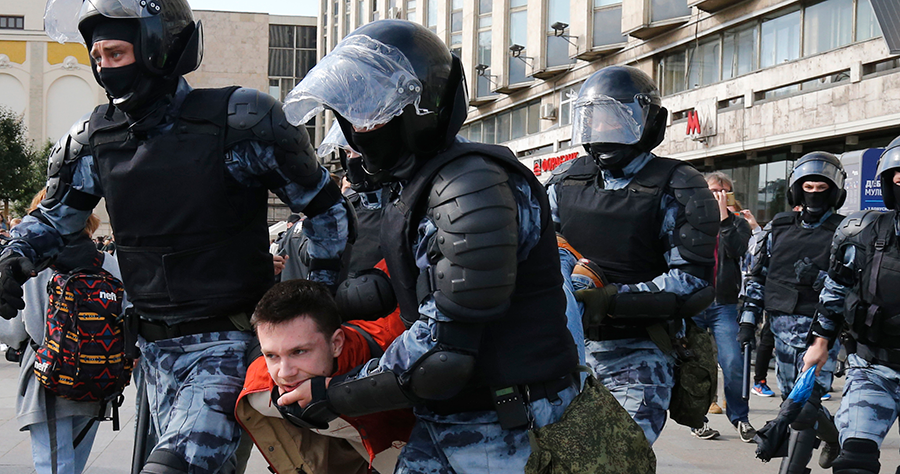 Police officers detain a protestor, during an unsanctioned rally in the center of Moscow, Russia, Saturday, Aug. 3, 2019. Moscow police on Saturday detained nearly 200 people protesting the exclusion of some independent and opposition candidates from the city council ballot. (AP Photo/Alexander Zeml

Right of Reply to the Russian Federation on the Violation of Freedom of Peaceful Assembly in the USA, Canada and some EU Member States

The restrictions that the Russian Federation cited in their statement—which, I must say, constituted an inexact and uninformed explanation of these regulations at best—are there to create a reasonable and safe environment to ensure the right to peaceful assembly, not to block it. You will not find in the United States, for example, that 90% of protest permits are denied, or that protesters are required to relocate to an inconvenient location far from city centers and “out of sight” of the very institutions against which they are protesting, as is the case in some participating States.

The right to peaceful assembly is not one-sided, both the government and its bodies and the individuals who gather have duties to ensure it is exercised safely and as broadly as possible. The United States and its individual states and municipalities are committed to upholding their “side of the bargain” when it comes to freedom of assembly, as we have for over 200 years, since 1791, when this right was first enshrined in the U.S. Constitution, in its First Amendment.

The hypothetical concerns expressed by the Russian Federation in regards to U.S. laws and the potential impact they might have, stand in stark contrast to the actual events taking place on the ground in Russia today. Here we have no need to speak in hypotheticals. Russian authorities are relentlessly narrowing the space for civic activism, eroding freedoms and detaining peaceful protesters, independent opposition candidates, and members of civil society for peacefully exercising their political rights. These actions run counter to Russia’s international obligations and its OSCE commitments.