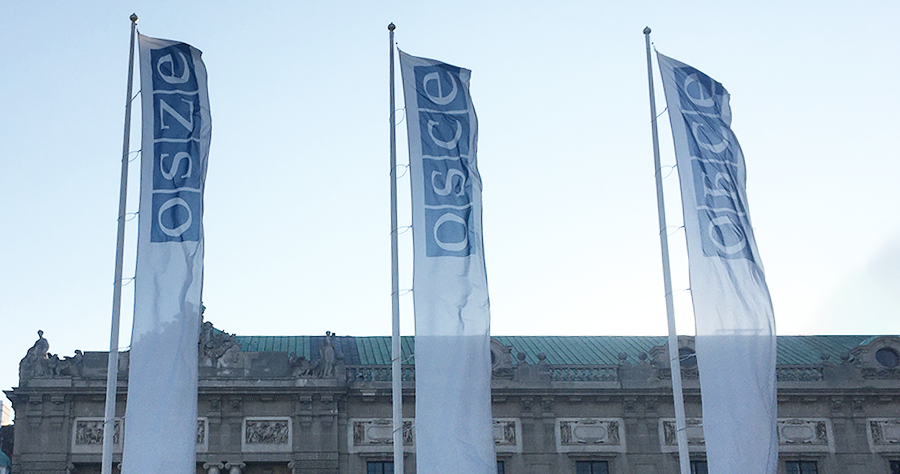 The United States would like to respond to the statement of my distinguished Russian colleague. I am afraid it was riddled with the usual errors and exaggerations that we have come to expect. We do acknowledge that racism is a serious issue that merits serious discussion in the United States and, for that matter, in many other countries as well, including those of the OSCE region. And we support that, both, in our own country and in other countries as well.

The United States is a supporter and a champion of human rights through its activities here at the OSCE. We stand strongly for the activities of ODIHR, and the United States participates fully in this organization, as a legitimate organization for human rights. We stand strongly for the democratic standard, despite what my Russian colleague may have said, and we speak up strongly on behalf of that. We support the ODIHR election observation missions, including the anticipated observation in the United States election.

People who break the law will be brought to justice, whether they are in authority or not. We will not predispose or pre-assume the result of any legal procedure that is conducted in the United States, legitimately, in the open with independent judges who bear no obligation to the state or to anyone else, and independent lawyers bar, of which I am a member, which go into court every day and stand for the proposition of the rule of law. The United States does these things, and we do not back down from any of that.

Now we acknowledge that the work of combatting racism and ending racial discrimination in the United States and in the OSCE region remains incomplete. This includes in my own country. The abolition of slavery in the United States in the nineteenth century, the formal eradication of discriminatory “Jim Crow laws” and other segregation policies, and the passage of landmark federal anti-discrimination legislation, including the Civil Rights Act of 1964, these things are matters of which the United States can be proud because of the progress that was made from the patterns that occurred centuries ago. Despite these strides, race-based discrimination remains an ongoing challenge, and is something the Unisted States faces directly and forthrightly.

In addition, we are appalled at any occurrence of senseless violence, whatever its source. Just two weeks ago, President Trump wrote an open letter to the Mayor of Chicago and the Governor of Illinois, decrying spikes in violence and offering to work with political leaders from all sides to address this issue. There are people who would create a violent situation for a political purpose, daring people to stand up for the rule of law. But the President wrote: “violence and death, which are disproportionately harming young African Americans,” which I think was alluded to by my Russian colleague. The President has said that these “are tragic and unacceptable, particularly on such a shocking scale.” So there is a difference here. The United States will maintain order, but we will not abuse people on the basis of race. We will maintain order, but we will not give a licence for wrongdoing to police. The United States will do the right thing in order to stand as a standard for our friends.

My country was founded upon the rule of law. Law must be objective. It must be honest, and it must be legitimately and culturally enforced. As President Trump recently stated, “it is the foundation of our prosperity, our freedom, and our very way of life. But where there is no law, there is no opportunity. Where there is no justice, there is no liberty.” We understand this: if justice is not prevailing in any court of law, or in any community, in any country, freedom is in jeopardy. “Where there is no safety, there is no future.”

As we celebrated our 244th Independence Day just last week, it is worth recalling that, when it declared its independence in 1776, the United States made a lifelong bet for democracy and for the fundamental freedoms of its people. Democracy is not easy. It does not always look wonderful or great, it doesn’t always look perfect – but it is the ONLY path to civilization for the future, the 21th century – in our country and in every other country that in this room. Independence does not come easy, but those rights and freedoms became the foundation of our United States, our new country. Our society and our values have been challenged many times since, but we remain committed to these ideals.

And as Vice President Pence recently stated, “there’s no tolerance for racism or violence in the streets of our country. As the President has made clear, we will honor the memory of George Floyd, justice will be served, we will have law and order in our streets, and we will heal our land. And as the people of this country did long ago, we will prove again that even in the most challenging times, America rises above. We always move forward, we overcome every obstacle, we reach new heights, and we reach them together.”

The United States is committed to a more perfect union. And each and every day since our founding, our nation has strived for a more perfect union. Excessive force by the police is never warranted, including against journalists that are doing their job, either foreign or domestic. Journalists everywhere—including in the United States—must be free to report what they observe. If you watch the television shows and read the newspapers right now, you can see that the press in America is free and reports its facts and delivers its opinions, and it is doing so freely right now as we speak. In the United States, no government action prevents the press and media from reporting what they see or expressing their opinions, and we are prepared to say so in our country and it applies to every other country.

Since my Russian colleague chose to raise this topic today, I’d be interested to hear more about what his government is doing about this issue as well.

Just a few months ago, in December, Human Rights Watch issued a report on Russian police raids in at least six regions of Russia which “involved detentions of migrant workers without legal basis, including some Russian citizens of non-Russian ethnicity.” The report went on to call out “racial profiling, mass detentions, and ill-treatment in police custody of migrant workers and Russians of non-Slavic appearance,” saying that it is “illegal and unjust” and should “stop immediately.” Mr. Ambassador, I would welcome hearing more about whether this racist profiling of Central Asians by your own country’s police force has ended and, if so, what the government of the Russian Federation did to end it.

The events in the United States in recent weeks underscore the urgent need to make progress on the challenge that lies squarely in front of us, namely for all Americans to work together to achieve the Constitution of the United States’ promise of a more perfect society. In doing so, we also uphold our international obligations and OSCE commitments.

Thank you, Mr. Chairman, for the opportunity to make this statement to our colleagues here at the OSCE.