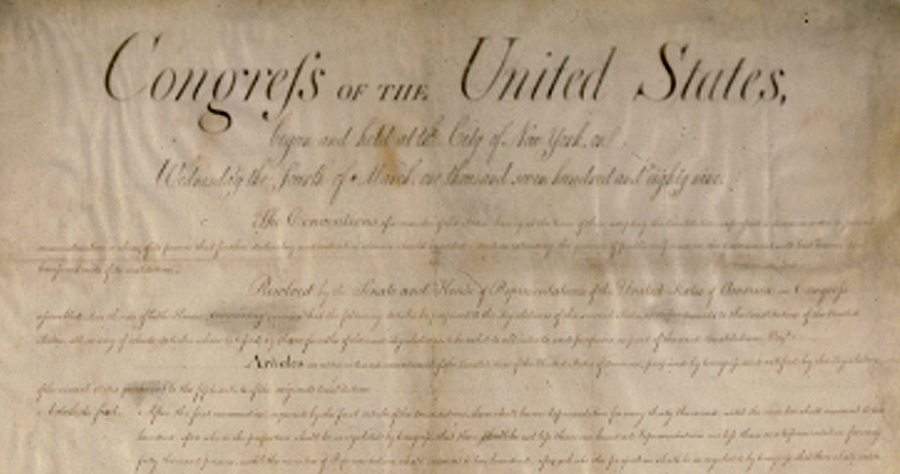 United States Bill of Rights in the state's archives in Providence, R.I. (Rhode Island Department of State via AP)

We listened with interest to the statement of our Russian colleagues and I can assure you, and him, that the United States is fully committed to freedom of expression, particularly for the Russian people.  The U.S. commitment to freedom of expression dates back to 1791, when our young country adopted the Bill of Rights, enshrining freedom of the speech as a fundamental right.  I would argue that few other liberties are held as dear by Americans. After all this time since 1791, the United States has managed to sustain and fulfill the freedom of speech and expression, despite all the crises and pressures that have come about, even in the modern era.  As technology changes and evolves, our understanding of freedom of speech grows and expands alongside it.

The government of the United States embraces the right of all individuals to seek and receive information of all kinds, both online and offline.  Unlike what we have seen in Russia and in the current repression of the media and Internet shutdowns in Belarus, we do not block access to the internet, and people in our country are free to express and disseminate their views both online and offline.

Some nations, like Russia, China, and Iran, take advantage of the openness of our country and our strong protections of freedom of expression and have engaged in disinformation campaigns that target the United States.  They attempt to spread falsehoods, fear, and a distrust of democratic institutions.  Recently some social media platforms, such as Facebook and Twitter, have begun more clearly labeling when a source is government-controlled and are moving to close those accounts where government actors have been posing as something other than what they are.  It bears emphasizing that these commercial platforms made these moves independently of the U.S. government, we do not control them, and not in response to any U.S. law or regulation.  It should also be noted that various platforms are also labeling official U.S. government accounts as such, including those of the State Department and the U.S. Secretary of State, so such platforms do not appear to be singling out accounts representing any one particular country or source.

In the globally interconnected world of today, attempting to wall off a population from a source of information is not possible and it will fail.  We note with concern Russia’s recent steps to impose new burdensome requirements on U.S. Agency for Global Media-funded entities in Russia, including Radio Free Europe/Radio Liberty and Voice of America.  For more than 70 years, these media outlets have been vital sources of independent news and information for the people of Russia.  Russia’s latest efforts represent a clear attack on media freedom and another example of the ongoing crackdown on independent press in Russia.  We uphold our international obligations and OSCE commitments to freedom of expression, and we call on our Russian friends to do the same.

Just as shortwave radio was used to reach captive audiences behind the Iron Curtain 50 years ago, a fact that will resonate with many sitting in this room today,  today people have access to other technologies that will allow them to get the information they seek, no matter what barriers are placed in their way.  While the United States does not now, nor will it ever, support censorship, it will also not abide the actions of those who attempt to take advantage of our freedoms in a malign attempt to sow division and confusion.