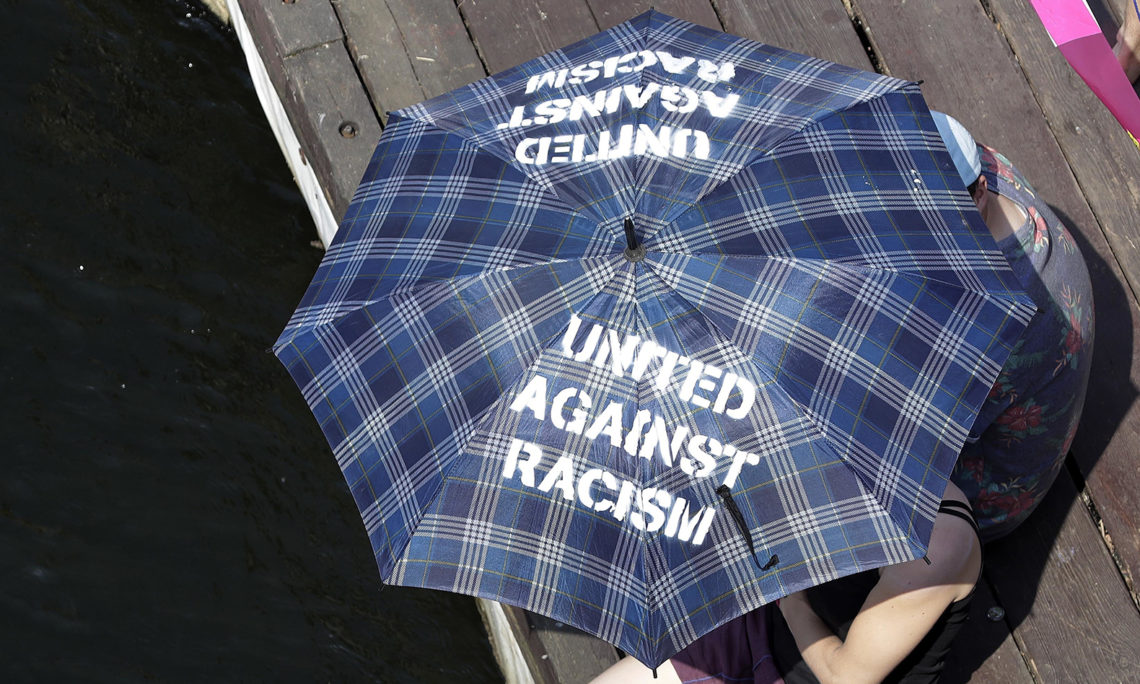 A woman with an umbrella protesting against racism, May, 2018. (AP Photo)

Thank you very much, Madam Chair.

As delegations are probably aware we had already planned to address some of the issues that were raised by my esteemed colleagues from Russia and Belarus under the category of Any Other Business.  In the interest of time, I will just deal with it now.  We will take our Any Other Business entry off.

My esteemed colleagues raised quite a litany of issues pertaining to the United States, all of which were clearly learned about from U.S. media sources, so it is at least hard to imagine that there are legitimate complaints about media freedom in the United States.

My country is a democracy dedicated to liberty and justice for all. We acknowledge our shortcomings and we do work to improve them.  Indeed, we are in the middle of a national dialogue right now to address these challenges in our work to become a more perfect union—to bring us closer to meeting the high ideals upon which our nation was founded.  Nations with a genuine devotion to human rights and equality do not conceal their failings, they confront them—honestly, transparently, and with a determination to make things right, which is what is happening in the United States right now.

As last week’s shooting in Colorado confirms, gun violence remains a problem in the United States.  Ten lives were lost, and families were shattered.  Investigations into the incident are ongoing.  The President shared his devastation and has urged Congress to take common sense steps to implement gun control.

Across the United States we also were appalled by the violent attacks in Atlanta and in other places against victims who were primarily from the Asian American and Pacific Islander community.  These attacks punctuated a rise in documented incidents of hate against Asian Americans over the last year.  The Biden/Harris administration is taking this issue head-on.  During his first week in office President Biden signed an executive order directing federal agencies to combat this resurgence of xenophobia.  More steps will follow.

As my esteemed colleagues noted, my country is still addressing the effects of the storming of the Capitol on January 6.  Numerous people have been charged with a variety of offenses from that day.  Each of them is due their right to a fair trial, under our Constitution.  They will be represented by independent lawyers and justice will be done.  The American judicial system will act impartially and independently as these investigations and legal processes move forward.  This is what we have advocated consistently as members of the OSCE.

Racism, xenophobia, nativism, and other forms of intolerance are not problems that are unique to the United States.  They are global problems that we all need to recognize and condemn, and which require comprehensive strategies to effectively address.  Earlier this week, on the International Day for the Elimination of Racial Discrimination, President Biden urged all nations and people to recommit to the fundamental truth that every human being has inherent dignity and deserves to be treated with fairness.  The United States will lead the conversation on these very painful issues—at home, in international institutions such as the OSCE, and around the world.  President Biden has made it very clear we will not shy away from taking on the damaging legacy of slavery and our treatment of Native Americans, or from addressing systemic racism and violence against Black, Native, Latino, Asian American and Pacific Islander communities, and other communities of color.  But we will also speak out against the horrific mistreatment of Rohingya in Burma, Uyghurs in China, or racial or ethnic discrimination anywhere we see in the world.

Responding to some other specific issues that my esteemed colleagues brought up, I deeply regret that yet again the U.S. delegation has to take the Permanent Council to explain to our Russian collague that Twitter and Facebook are commercial platforms that enforced their respective terms of service.  These commercial platforms made decisions to suspend accounts independently from the U.S. government and  not as a result of any U.S. law.  We again draw your attention to the fact that governments do not have rights to Freedom of Expression, which is an individual right.  Any removal of material from social media platforms by a private company in no way impacts the ability of individuals to express themselves in other fora or through a variety of media.  While some participating States are ruled by a small cadre of political and economic oligarchs that control the levers of government with little to no input from their citizens, this is not the system in the United States. We do not block access to the Internet for social media companies for creating a platform for the exchange of ideas or target individuals seeking to freely express or disseminate their views, both online and offline.

I would like to say again that there is no equivalence between the U.S. FARA legislation and Russia’s “foreign agent” law.  I do continue to urge my Russian colleagues to visit RT’s American website and see for themselves how difficult it is to find a mention of RT’s foreign agent status.

With regard to excessive force by the police, this is never warranted.  The United States is, as I have said, a country with a strong rule of law.  Any time there are allegations concerning the use of unlawful or excessive force, such as in the cases mentioned, the Constitution and laws of the United States provide authority for the Government to conduct a complete investigation and, if appropriate, prosecute those who have violated federal criminal law within an adversarial justice system where guilt must be proven beyond a reasonable doubt.

I will turn last to the death penalty, which is a subject of interest to many of our participanting States.  As my delegation has noted in the past, international law does not prohibit capital punishment, and each country, and in the case of the United States, each state in the union as well as our federal government, may make its own choice on this matter.  However, President Biden supports legislatively ending the death penalty at the federal level and incentivizing states to do so as well.  The U.S. Department of Justice continues to take precautions to ensure decisions to seek the death penalty at the federal level are not based on factors that include race or national origin.  The United States does not impose the death penalty lightly.

Thank you, very much, Madam Chair.