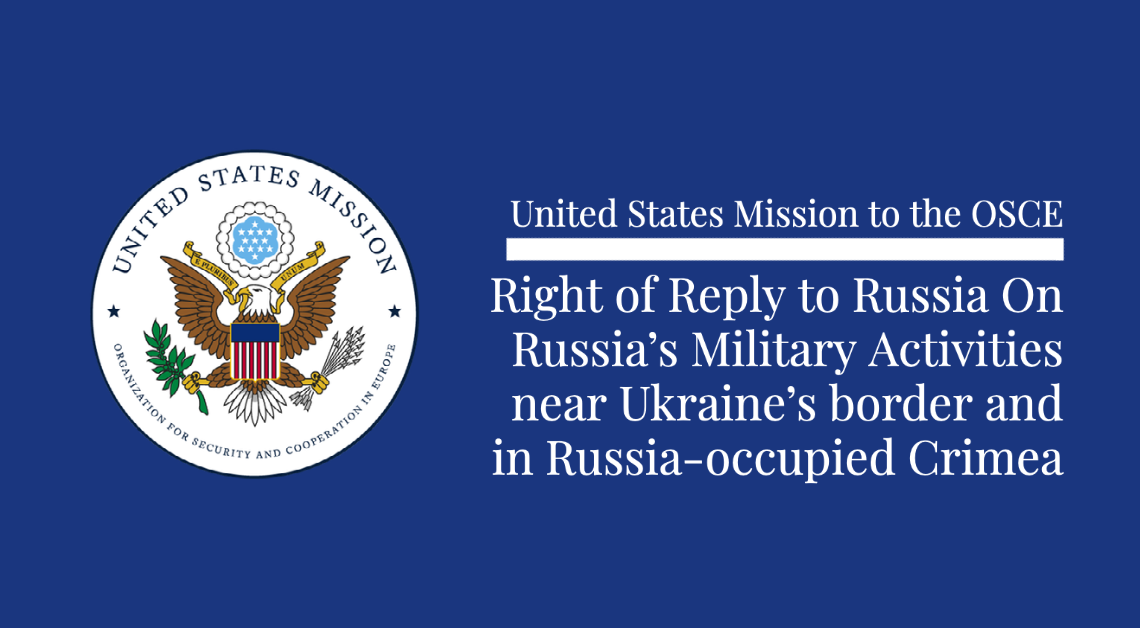 As delivered by Chargé d’Affaires Courtney Austrian
to a special joint session of the Forum for Security Cooperation and the Permanent Council,
Vienna April 14, 2021

For months now, Russia has woven fantasies about Ukraine’s alleged military preparations to expel Russia-led forces from the Donbas region of eastern Ukraine. Our esteemed Russian colleagues painted a picture of worsening conditions on the ground in eastern Ukraine, long before it had truly worsened. Despite Russian efforts to convince us these fabrications hold a shred of truth, there is zero evidence Kyiv is planning a large-scale military operation. We’re less sure about Moscow.

When Russia first began spinning its false narrative of worsening tensions in the Donbas, the United States and other participating States accurately noted that the real situation was actually far better than in previous years. Total ceasefire violations, as well as civilian and military casualties were fewer than when compared with the same period last year. That said, each one of these casualties is a tragedy, and all are due entirely to Russia’s aggression.

I would remind my Russian colleagues that large military activities on the border of, or indeed in the territory of, a neighbor without prior notification, as is the case here, are destabilizing, particularly when given the context and the history. It raises questions about intention, and to our knowledge, Ukraine has taken no step that could be viewed as provoking such a response. We again call on Russia to explain the size, composition, and purpose of this activity.

Related to the points raised by my esteemed colleague, NATO has acted in a responsible, transparent, measured, and open manner in the context of significant uncertainties in the region caused by Russian activities. It is Moscow that needs to meaningfully and immediately deescalate and to do so in a transparent and verifiable manner. If Russia has concerns about NATO or U.S. forces in Europe, it should use the appropriate provisions of the Vienna Document to request additional information or transparency.

Related to our assistance to Ukraine, our assistance is provided in a legal and transparent manner and consistent with Ukraine’s right to self defence.

I would like to close, however, by welcoming Russia’s decision to participate in today’s meeting, as I do think that dialogue is a key component in our work here at the OSCE. So thank you very much.