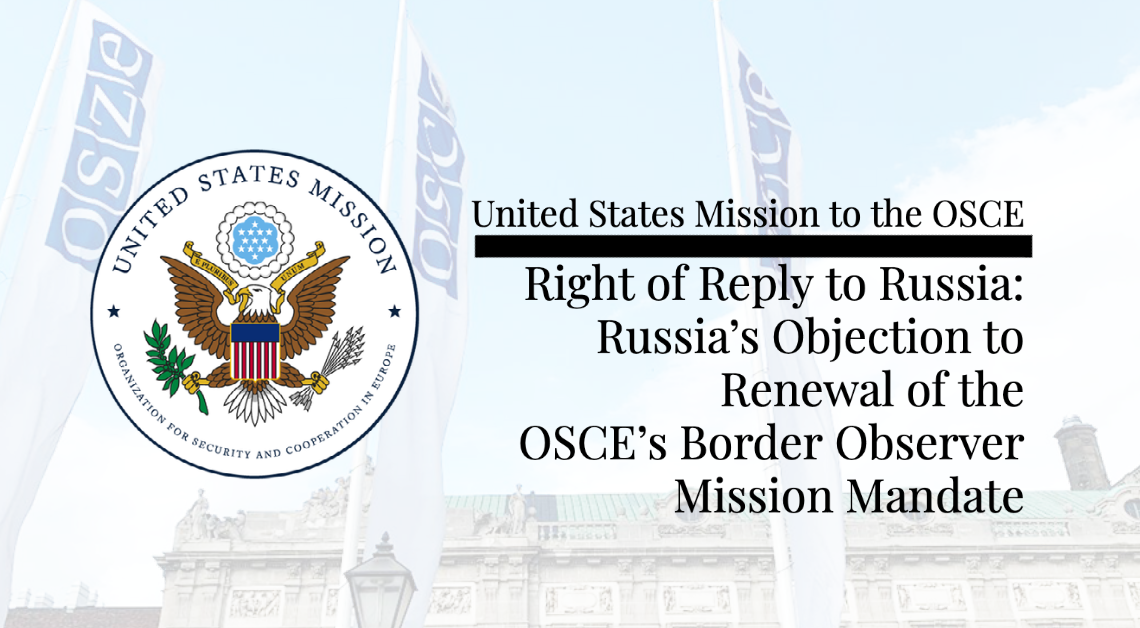 Right of Reply to Russia: Russia’s Objection to Renewal of the OSCE’s Border Observer Mission Mandate

The United States deeply regrets that the Russian Federation has indicated that it will not join consensus to extend the mission’s mandate and financing arrangement at the end of September, despite a clear belief on the part of participating States that the BOM plays a valuable role as a confidence building measure and guarantee of transparency. As indicated in statements at the Permanent Council both today and on previous occasions, participating States strongly believe the Mission has effectively and professionally carried out its agreed mandate.  I would note that my esteemed Russian colleagues have previously appeared to agree with this assessment of the BOM’s work.

As we have said repeatedly, despite the limited geographic scope of the Mission, it plays a significant role in providing impartial reporting of border crossings at these two points, and more broadly as a confidence-building measure. The current two-month extension is far less than optimal to ensure its full operational capabilities and effectiveness.  However, maintaining the Mission even on this basis preserves the possibility that its operations can be strengthened to the benefit of all parties concerned.

I remind this Permanent Council that Russia signed the Minsk Protocols in 2014, which contain the text guaranteeing “permanent monitoring on the Ukrainian Russian state border and verification by the OSCE.”  Russia’s current objection to the Border Observer Mission’s mandate renewal looks to be just the latest in a long line of broken promises and the most recent demonstration that maintaining positive relations with its neighbors is simply not a priority for Russia.

The United States will continue to support the Chair-in-Office in its efforts to find a way to sustain the Border Observation Mission and its valuable work.

Thank you very much Mr. Chair.