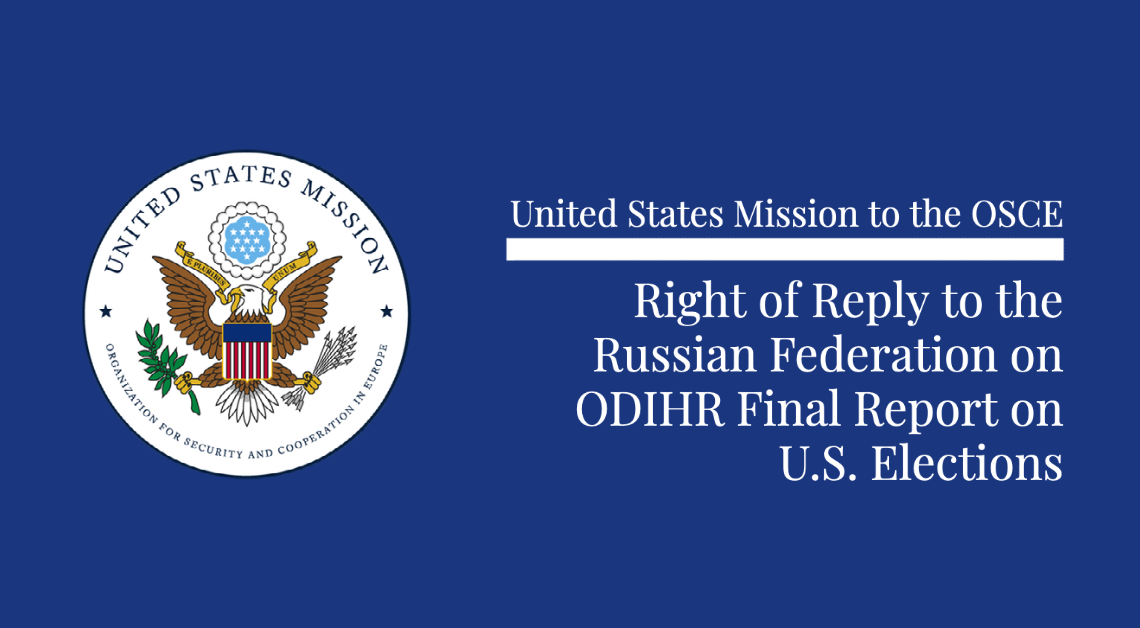 Right of Reply to the Russian Federation on ODIHR Final Report on U.S. Elections

Thank you, Madam Chair, I just wanted to return to some of the comments made by my Russian colleague.

The 2020 election saw more Americans from every community in our country participate in the electoral process and exercise their right to vote. It had the highest voter turnout in over 50 years despite the challenges of the pandemic.

In terms of voting by mail, indeed, more Americans than ever before, including the former president himself, voted by mail in the election.  I am not surprised that ODIHR did not mention this in their report, because despite the changing method, all safety procedures were followed, which led the U.S. government to declare the election the safest in our history.

Regarding OSCE observers, the U.S. is committed to fulfilling our obligations to host observers.  Within the United States’ federal system of government, the responsibility for organizing elections falls largely with state and local governments. The Department of State therefore facilitated the Needs Assessment Mission and the subsequent election observation mission and assisted ODIHR in its efforts to contact state and local elections officials throughout the United States to facilitate the OSCE’s election observation mission.

This assertion that there has not been any adoption of recommendations is imprecise. Two tranches of federal election administration grants to states were appropriated through legislation since the 2018 elections (one focused on election security and one for pandemic response), as was noted elsewhere in the report.

In conclusion, we encourage all participating States to invite ODIHR election observers to fulfill their OSCE commitments.