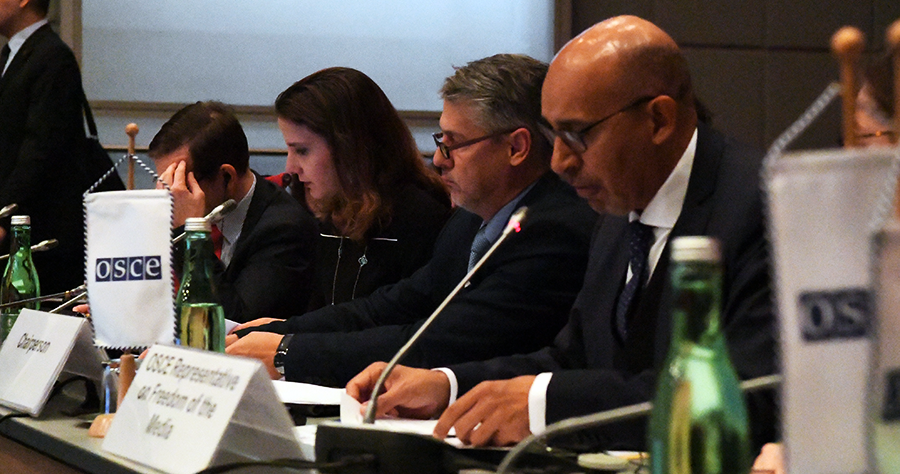 The report on the state of media freedom in the OSCE is delivered by Harlem Desir, the OSCE Representative on Freedom of the Media to the Permanent Council on November 21, 2019. (USOSCE/Gower)

Mr. Chairperson, with respect to my esteemed Russian colleague’s efforts to make equivalency in the American “Foreign Agents Registration Act” and Russian legislation, it is worth noting that the United States and international media have been blocked in Russian TV and radio for years.  The United States act simply requires people and companies to register and disclose information required by statute as to who these Russian outlets are and what they are doing. It promotes transparency and in no way tries to control the content of what they are saying. That is the key difference. We still have freedom of speech even for the Russian outlets in the United States.  In fact, RT and Sputnik broadcast openly in the United States and nobody attempts to try to block their content; Our law does not impede media outlets’ operation in any way.  So, let’s be clear that there is no equivalence between the U.S. legislation and Russia’s Foreign Agent Law, which is used to restrict, intimidate, prosecute, and shut down civil society and independent press.  Now, this is a bad turn that has been taken over the last number of years in Russia, and contrary to the ideas that they adopted in the Helsinki Final Act.

I wonder if the Russian delegate would be prepared to say that the United States and other Western outlets will now be permitted to go into Russia and broadcast openly and freely without any attempt to control their content. That would be a step forward for the freedom of the media in the OSCE area.