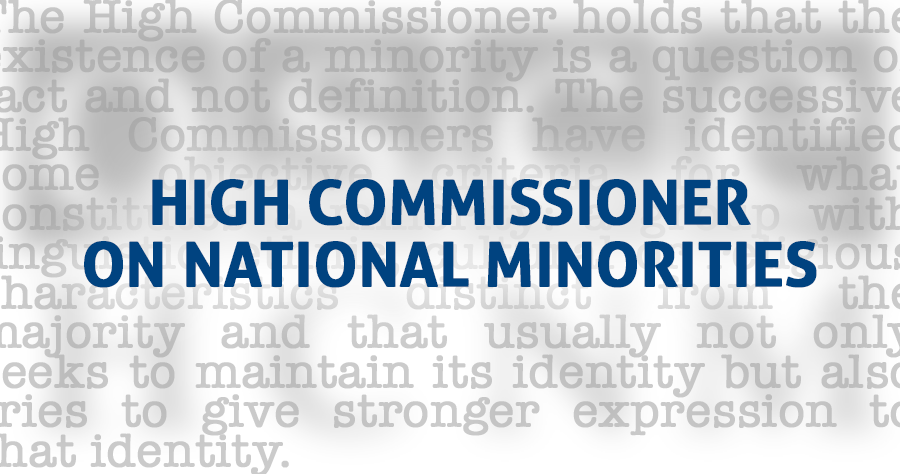 US Statement on Tolerance and Non-discrimination at HDIM Session 10 : Rights of Persons Belonging to National Minorities

As prepared for delivery by Ambassador Michael Kozak, Head of Delegation
Warsaw
September 18, 2017

Let me express a warm welcome to Ambassador Lamberto Zannier in his new capacity as the OSCE High Commissioner on National Minorities. The United States attaches great importance to the work of the High Commissioner’s office. The independence and objectivity with which that work has been carried out over the years has been key to the integrity and success of the office. Under Ambassador Zannier’s leadership, we have every expectation that the HCNM will remain an example of a highly effective and independent OSCE institution.

Violations of the rights of persons belonging to minorities persist in many participating States.

In Bosnia and Herzegovina, the collective privileges of select groups can supersede the individual human rights of citizens, causing qualified persons to be excluded from public office because of ethnicity. The still-unresolved Sejdic-Finci case symbolizes broader problems. Within Republika Srpska under the leadership of Milorad Dodik, policies and rhetoric have sanctioned intimidation and discrimination against non-Serb returnees, including in education and employment. Republika Srpska officials have belligerently denied past wrongs, including the genocide at Srebrenica. Within the Federation, the segregated education system fails to prepare youth for success.

Although Serb minority representatives form part of the governing coalition in Croatia, Serbs there face discrimination from extremist elements. We urge the government to continue to protect the rights of members of all minorities. We remain similarly concerned about the Serb and other minority communities in Kosovo that face institutional and societal discrimination in employment, access to legal and social services, and freedom of movement. We encourage Belgrade and Pristina to advance their dialogue under European Union auspices, and to implement previous agreements. Kosovo should be represented here in the OSCE, where it would be held more directly accountable for violations of the rights of members of minorities.

Russian occupation authorities in Crimea continue to ban the democratically elected representative body of the Crimean Tatars, the Crimean Tatar Mejlis, claiming it is an “extremist” organization. Occupation authorities continue to subject Crimean Tatars to physical abuse, according to widespread reports, and have failed to adequately investigate reports of killings and disappearances. We call on Russia end its occupation of Crimea, and to bring to justice those responsible for over a dozen unsolved disappearances of Crimean Tatars since its occupation began, including activist Ervin Ibragimov, last seen being thrown into a van by security forces in May 2016. Crimean Tatar leaders and activists face arbitrary arrests, interrogation, politically-motivated prosecutions, arbitrary searches of homes, schools, and places of worship, and imprisonment. We call for the release of Mejlis Deputy Chairmen Akhtem Chiygoz and Ilmi Umerov. Other communities targeted for discrimination, harassment, and prosecution in Russia-occupied Crimea include ethnic Ukrainians who try to maintain their Ukrainian identity.

In the Kyrgyz Republic, security concerns are used to justify broad “extremism” restrictions, which tend to disproportionately impact the ethnic Uzbek population. Uzbeks face discrimination in business and government, and often are subject to harassment and arbitrary arrest. We urge the government to ensure that members of minorities enjoy equal protection under the law, and that they are adequately represented in security force and government positions.

Georgia has taken steps to improve the situation for members of minority populations, but the negative effects of Russia-backed nationalist separatism hinder members of local minorities in the exercise of their rights. In the occupied regions of South Ossetia and Abkhazia, ethnic Georgians face restrictions on movement and domestic property rights, as well as on their right to vote and participate in Georgia’s political process.

In Moldova, the government has made limited progress on recognition of minorities, but has failed to pass three laws that affirm the existence of the autonomous region of Gagauzia.

As previous High Commissioners have reminded us, majorities in one country can have affinities for kin who are minorities in other countries. Governments should respect Helsinki Final Act Principles guiding relations between States. We should express our legitimate concerns for the rights of persons belonging to national minorities in other countries, including those with whom we have affinities, but do so without inflammatory rhetoric or destabilizing intent. Russia’s policies and actions concerning ethnic Russians in other states are dangerous. Its armed invasion, occupation and attempted annexation of Ukraine’s Crimean peninsula, and the armed conflict that Russia fomented and continues to fuel in eastern Ukraine, are classic cases of aggression rationalized by the aggressor on manufactured ethnic pretexts. These malign tactics are not consistent with Helsinki Final Act Principles.

Roma and Sinti face discrimination in virtually every country where they live. The United States is concerned about mob attacks in: Asenovgrad, Bulgaria; Harghita County, Romania; Menidi, a suburb of Athens, Greece; and in the village of Olshany in Ukraine. Such actions undermine the rule of law.

I welcome the announcement by the Government of the Czech Republic on August 21 of an agreement to remove the pig farm from the site of the World War II concentration camp for Roma in Lety. This step will pave the way for a dignified and appropriate memorial for those interned at Lety, for the many who died there, and for those who were deported to and perished at Auschwitz. The United States supported efforts by the U.S. Holocaust Memorial Museum to obtain a copy of the Lety camp archives, the only complete surviving record of a concentration camp for Roma.