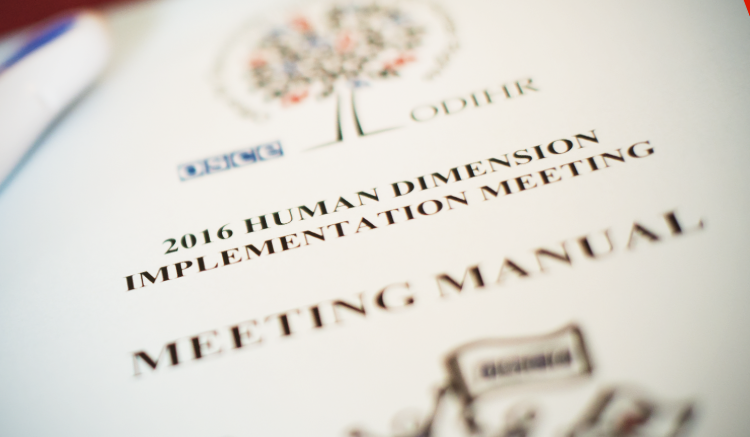 Two weeks ago, ODIHR and the German chairmanship organized a conference on the role of political leaders in countering discrimination, racism, and bias-motivated crimes against Roma. This conference built on an excellent side event convened during last year’s Human Dimension Implementation Meeting. We commend Germany and ODIHR for continuing to focus on this problem as well as the civil society organizations which participated.

The United States believes in the importance of speaking out against anti-Roma rhetoric and violence as well as halting the forced displacement of Romani families. We condemn the phenomena of politicians who do not merely reflect or channel popular prejudices but intentionally magnify and exploit them for political purposes.

In the Odessa region of Ukraine, violent mobs forced approximately 60 Roma to flee their homes. For the strength of democracy as a whole in Ukraine, the authorities must hold the perpetrators of this incident accountable. We urge Ukraine to continue to address the issues raised in ODIHR’s “Assessment Report on the Situation of Roma in Ukraine and the Impact of the Current Crisis.”

We are concerned by the attack on a Romani mosque in Kriva Palanka, Macedonia last November, and anti-Roma mobs in Radnevo, Bulgaria in May.

We are also troubled by recent comments by Czech Deputy Prime Minister Andrej Babis denying that Lety was a concentration camp. However, we were encouraged to hear of his subsequent support for Czech government efforts to purchase the Lety site for a dignified memorial. As many participants noted during the recent conference in Berlin, much more should be done to teach about and properly memorialize the genocide of Roma. Earlier this year, President Obama appointed Dr. Ethel Brooks to the United States Holocaust Memorial Museum Council, bringing an important Romani voice to that body.

The United States continues to be concerned about the forced displacement and eviction of Romani individuals, such as the excessive use of force and expulsion of Roma from their homes in the Tula region of Russia in late May and the discriminatory forced evictions of Roma residents in the city of Miskolc in Hungary, as detailed in ODIHR Director Link’s Field Assessment published on September 1. In many instances, Roma have fallen victim to multiple displacements, a phenomenon that exacerbates every facet of the marginalization of Roma. We welcome the focus of ODIHR, in concert with other international organizations, on this critical issue.

Moderator, a remarkable feature of bigotry is that it is highly transferrable. In a number of countries, the purveyors of hate may focus on Jews in one year and pivot to Roma in the next. Today, many of those searching for scapegoats are directing their hatred against those fleeing war and persecution. Some hatemongers seek to play Roma off migrants in the same breath.

With this in mind, we underscore our support for coalition building efforts among diverse groups focused on integration, nondiscrimination, and combating racism, religious prejudice, xenophobia, and other forms of bigotry.

Finally, moderator, I would like to touch on two encouraging developments. First, an Italian court decided a case involving a Romani woman born and raised in Italy but whose parents were Bosnian citizens who had fled the war in Yugoslavia. The court decided to allow Italian citizenship. There is still a great need to ensure that all Roma have their citizenship recognized, or equal access to citizenship, and have the identity and other basic documents necessary to participate fully in the societies in which they live.

We also welcome Slovak President Andrej Kiska’s State of the Union address in July. That statement on inclusive education and access for Roma exemplifies the positive role that a political leader can play in speaking out against all forms of bigotry and focusing on concrete solutions to address the consequences of racism, including in the area of education.