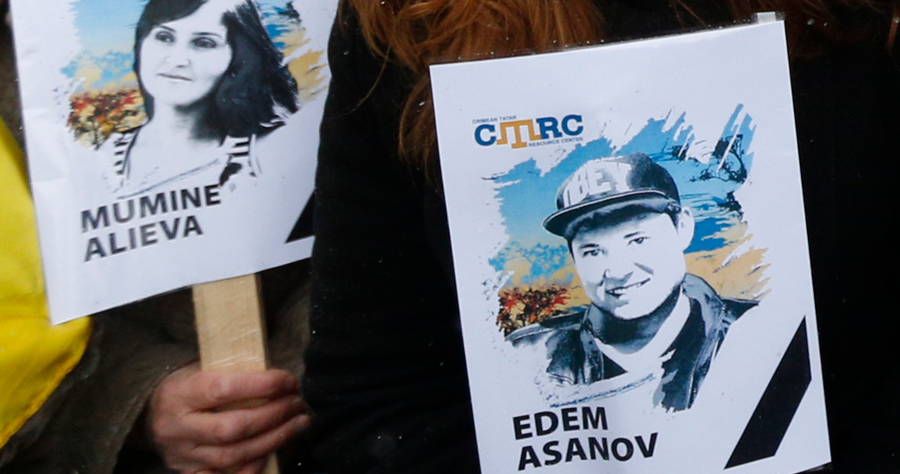 The continuing illegal occupation of Crimea by Russia

Statement by Chargé d’Affaires ad interim of the United States, Harry Kamien,
at the Permanent Council of Vienna
on 1 March 2018

Dear colleagues, during my speech today on the screens above will be displayed the names of the victims who suffered as a result of repression in response to the protest against the Russian occupation of the Crimea. These names will also be distributed in the written form of our application.

This week marks the four years since the day when Russian servicemen in the uniform unmarked captured the parliament building in Simferopol under the threat of using weapons. Only three weeks later, Moscow staged an illegitimate and illegal referendum in the Crimea. Throughout this operation, Russia conducted a campaign of lies to distort the truth and divert the attention of the world from its attempt to illegally capture and then annex Ukrainian territory, using this and other forums to spread its lies.

Since Russia began the occupation of the Crimea, it held several rounds of elections in Crimea in violation of the sovereignty and territorial integrity of Ukraine. The United States does not recognize the legality or outcome of these elections, and they will never recognize the legitimacy of any elections that Russia will try to stage on the peninsula later this month.

Mr. Chairman, over the past four years, Russia has been moving along the path of coercion and violence to maintain its illegitimate control, carrying out repressions against those who oppose the Russian occupation or attempts to annex Crimea. The United States is also deeply concerned about the growing number of Ukrainian citizens in the Crimea occupied by Russia who are being illegally drafted for military service in Russia, some of whom are being sent to participate in external conflicts, including the conflict in Syria.

Mr. Chairman, whether we participate in the meeting here in the Hofburg, or are on the ground in Ukraine, we know the truth: the Crimea is Ukraine. Our position is clear: the United States will not reconcile itself to the rule of Russia in the occupied Crimea. US Secretary of State Tillerson stated at the OSCE Ministerial Meeting in December: «We will never reconcile ourselves with the Russian occupation and an attempt at annexation of the Crimea. Sanctions related to the Crimea will remain in force until Russia regains full control over the peninsula Ukraine. «

Mr. Chairman, the United States will continue to expose Russia’s attempts to distort the truth and rewrite history. Forced action by Russia in striving to strangle independent voices can not hide facts. We reject the principle «who is strong, that’s right.» Deceptive propaganda and lies do not change reality.

For four years in the Permanent Council, we chronicled serious violations committed by Russia and its occupation authorities in the Crimea. Every week at a meeting of the Permanent Council of the United States pay attention to the victims of Russian oppression. The list of persons who have become victims in the last year can be found in the annex, which will be included in the written version of my statement, which we will circulate. We drew delegations’ attention to the blatant practices reportedly committed or committed by Russian security forces, including extrajudicial killings, kidnapping, searches, disappearances, arbitrary detentions, physical violence, torture, deportation, harassment, forced psychiatric hospitalization and politically motivated criminal persecution, as well as other coercive methods.

Mr. Chairman, at a side event on the situation in the Crimea and the east of Ukraine, which took place here this week in Hofburg, we heard how representatives of civil society directly related the same problems. Alexandra Romantsova of the Center for Civil Liberties provided detailed reports on Russia’s attacks on Crimean Tatars, ethnic Ukrainians, pro-Ukrainian activists, and independent journalists who are subject to politically motivated criminal prosecution and repression. The fact that the 32 OSCE participating States jointly organized this event demonstrates the relevance that most delegations in our Organization attach to the issue of abuses in the Crimea.

Moreover, the number of victims is alarming. According to the Center for Crimean Tatar Resources, in 2017, the occupying Russian security forces killed at least four people, detained 16 new political prisoners, organized 16 cases of disappearances, detained 286 people, carried out 62 searches, made 46 arrests and they collected 104 fine from people only because they opposed the Russian rule in the Crimea. According to the Crimean Human Rights Group, at least 70 people have been imprisoned for politically motivated reasons since the beginning of the occupation, and at least 55 of these persons are still in prison. This does not include many other Ukrainians from other regions of Ukraine, also languishing in Russian prisons.

Independent media and civil society are subject to persistent repression. The Crimean-Tatar self-government body, the Mejlis, is still banned on a trumped-up charge that it is a so-called «extremist» organization. His courageous leaders continue to represent the interests of the Crimean Tatars, who are still in the Crimea, before the international community from the places of their stay in exile.

Attacks and violations of Russia have a deterrent effect on freedom of expression, association and peaceful assembly, as well as religion or belief. Nevertheless, courageous people continue to oppose the occupation and against abuses by the Russian security forces. The United States is particularly concerned about the treatment of more than 100 people who participated in individual protests on October 14 against the criminal prosecution by Russia. They protested one by one, and they protested peacefully, standing up for the protection of their rights and the rights of their neighbors and community. Since then, they face administrative fines, arrests and active harassment.

We call on Russia to stop repressions against the Crimean Tatars and stop oppressing those who dare to criticize the actions of Russian invaders and the attempt of annexation of Crimea by Russia. The flagrant abuses and violations of sovereignty and territorial integrity of Ukraine by Ukraine are an attack on the citizens of Ukraine, as well as on our global order. The Russian attempt to annex Crimea and its policy of repression to ensure occupation signify a rejection of the foundations of our postwar international order, which has existed for more than 70 years.

Mr. President, the United States reaffirms its full support for the sovereignty, independence and territorial integrity of Ukraine within its internationally recognized borders. We reiterate that sanctions related to the Crimea will remain in force until Russia regains full control over the peninsula Ukraine. We again call on Russia to observe the principles of the Helsinki Final Act, in which all participating States recognized that the borders of all countries are inviolable, and pledged to respect the sovereignty and territorial integrity of each participating State.

This translation is provided for the convenience of users, and only the original English text should be considered official.