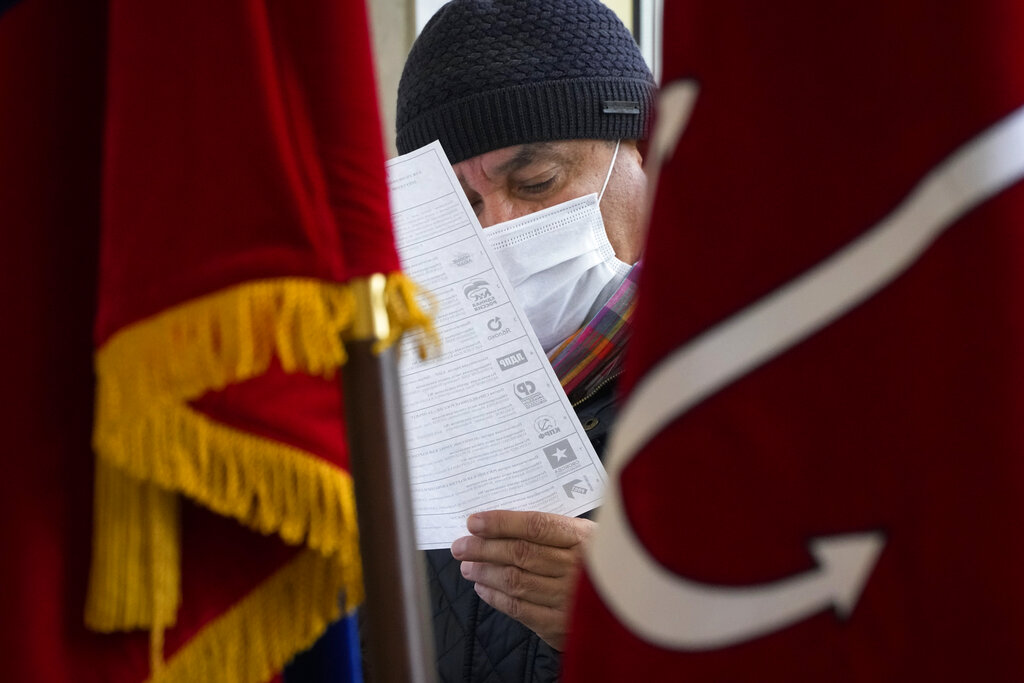 A man examines his ballot during the State Duma elections at a polling station in St. Petersburg, Russia. (AP Photo/Dmitri Lovetsky)

We are troubled by widespread reports of electoral abuses over the three days of voting, including ballot stuffing and coercion to vote.  During these elections, the independent election monitor Golos found domestic election observers faced the highest level of threats and violence since at least 2016.

The Russian Government’s increasing restrictions on civil society organizations, independent journalists, and opposition groups over the past year and a half underscored its desire to unfairly advantage pro-Kremlin candidates and marginalize all independent political voices.  Authorities took unprecedented steps against voices critical or independent of the government.  They enforced repressive laws on so-called “foreign agents,” “undesirable organizations,” and “extremist organizations.”  These laws carry onerous legal requirements and social stigma, and in some cases forced closures and involved serious criminal charges.

Authorities have targeted independent media in particular.  In 2021 alone, 30 more independent media outlets or individuals were added to the register of “media foreign agents” — an increase of 176 percent.  Sixty percent of all “undesirable organization” designations, which fully criminalize an organization’s operations in the country, were made since 2020 and include the investigative reporting group Proyekt.  The Kremlin has also increased pressure on private technology companies to remove from social media platforms political content expressing dissent or criticism.  These steps restricted Russian citizens’ access to diverse perspectives in the crucial pre-election period, impeded independent electoral monitoring, and have had a broader chilling effect on independent reporting.

As a result of the designation of organizations affiliated with oppositionist Aleksey Navalny as “extremist” and recent changes to the law on extremism, authorities have a new tool to selectively disqualify from running for office thousands of politically engaged Russians who have been associated with those groups.  The Russian human rights group Memorial noted since the beginning of the year a 17 percent increase in political prisoners, including Navalny and others targeted for their activism.  We call again for the release of Navalny and the hundreds of other political prisoners held in Russia.

The hostile electoral environment severely restricted political pluralism and prevented the Russian people from exercising their civil and political rights.  As State Department Spokesman Ned Price noted on September 20, the United States calls upon Russia to honor its international obligations to respect human rights and fundamental freedoms and to end its pressure campaign on civil society, the political opposition, and independent media.

We also condemn Russia’s decision to organize polling on the territory of Georgia, Moldova, and Ukraine without the consent of those governments and reaffirm our unwavering support for the sovereignty and territorial integrity of those countries.