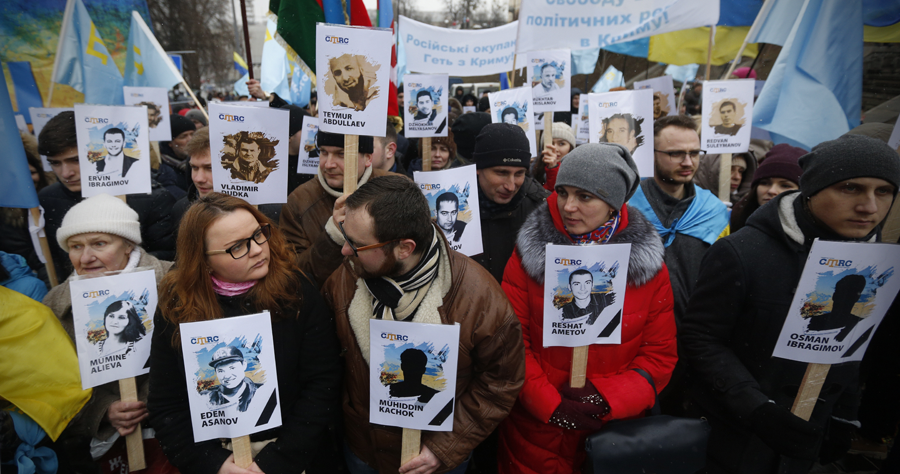 Distinguished colleagues, as I deliver my intervention today, you will see the names of victims who have suffered abuses for speaking out against Russian occupation of Crimea flashed on the screens above us. These names will also be circulated in our written statement.

Four years ago this week, Russian troops in unmarked uniforms seized the parliament building in Simferopol at gunpoint. Just three weeks later Moscow staged an illegitimate and illegal referendum in Crimea. During the entire operation, Russia engaged in a campaign of lies designed to distort and distract from its attempt to illegally seize and then annex Ukrainian territory, using this and other fora to spread its falsehoods.

Mr. Chair, in the past four years, Russia has embarked on a path of coercion and violence to maintain its illegitimate control by targeting for repression anyone opposed to Russia’s occupation or attempted annexation of Crimea. The United States is also deeply concerned about the growing number of Ukrainian citizens in Russia-occupied Crimea who are illegally conscripted into Russian military service, with some having been deployed to external conflicts, including the conflict in Syria.

Mr. Chair, we here at the Hofburg and on the ground in Ukraine know the truth – Crimea is Ukraine. Our position is clear: The United States will not acquiesce to Russian rule of occupied Crimea. As U.S. Secretary of State Tillerson said at the Ministerial Council in December: “We will never accept Russia’s occupation and attempted annexation of Crimea. Crimea-related sanctions will remain in place until Russia returns full control of the peninsula to Ukraine.”

Mr. Chair, the United States will continue to expose Russia’s efforts to distort the truth and rewrite history. Russia’s coercive actions to stifle independent voices cannot hide the facts. Might does not make right. False propaganda and lies do not alter reality.

For four years we have chronicled in the Permanent Council the serious abuses perpetrated by Russia and its occupation authorities in Crimea. Each week at the Permanent Council, the United States draws attention to the victims of Russian oppression. An index of the past year’s cases can be found in the annex that will be included with the written version of my intervention, which we will circulate. We have drawn attention to egregious practices that Russian security forces have reportedly committed or condoned, including extrajudicial killings, kidnappings, raids, disappearances, arbitrary detention, physical abuse, torture, deportation, harassment, forced psychiatric hospitalization, and politically-motivated prosecution, among other coercive practices.

Mr. Chair, at a side event on Crimea and eastern Ukraine earlier this week here at the Hofburg, we heard directly from civil society about these very same concerns. Oleksandra Romantsova from the Center for Civil Liberties provided detailed accounts of Russia’s attacks on Crimean Tatars, ethnic Ukrainians, pro-Ukraine activists, and independent journalists, who have been subjected to politically motivated persecution and repression. The fact that 32 OSCE participating States co-sponsored the event demonstrates the urgency that the majority of delegations in our Organization places on the issue of abuses in Crimea.

In fact, the number of victims is alarming. In 2017 occupying Russian security forces killed at least four people, took 16 new political prisoners, caused 16 disappearances, detained 286 people, conducted 62 searches, made 46 arrests, and levied 104 fines against people simply for speaking out against Russian rule in Crimea, according to the Crimean Tatar Resource Center. According to the Crimea Human Rights Group, there have been at least 70 politically-motivated imprisonments since the occupation began, and at least 55 of these individuals are still in prison. This does not include the many other Ukrainians from elsewhere in Ukraine also languishing in Russian prisons.

Independent media and civil society have been subjected to unrelenting repression. The Crimean Tatar self-governing body, the Mejlis, remains banned on fabricated charges of being a so-called “extremist” organization. Its brave leaders continue to represent Crimean Tatars still in Crimea to the international community from their places in exile.

Russia’s attacks and abuses have a chilling effect on the freedoms of expression, association and peaceful assembly, and religion or belief. Yet, courageous individuals continue to speak out against the occupation and against the abuses perpetrated by Russian security forces. The United States views with particular concern the treatment of the over 100 individuals who participated in individual protests against Russian persecution on October 14. They protested alone, and they protested peacefully, to stand up for their rights and those of their neighbors and community. Since then, they have faced administrative fines, detention, and heightened harassment.

We call on Russia to end its repression of the Crimean Tatars and to stop its oppression of anyone daring to criticize the actions of the Russian occupiers and of Russia’s attempted annexation of Crimea. Russia’s egregious abuses and violations of Ukraine’s sovereignty and territorial integrity are an assault on the citizens of Ukraine, and on our global order. Russia’s attempted annexation of Crimea and its policy of repression to enforce its occupation are a rejection of the foundations of over 70 years of our post-war international order.

Mr. Chair, the United States affirms its full support for Ukraine’s sovereignty, independence, and territorial integrity within its internationally-recognized borders. We reiterate, Crimea-related sanctions will remain in place until Russia returns full control of the peninsula to Ukraine. We again call on Russia to observe the Helsinki Final Act, in which all participating States acknowledged that one another’s frontiers are inviolable and committed to respect the sovereignty and territorial integrity of each participating State.