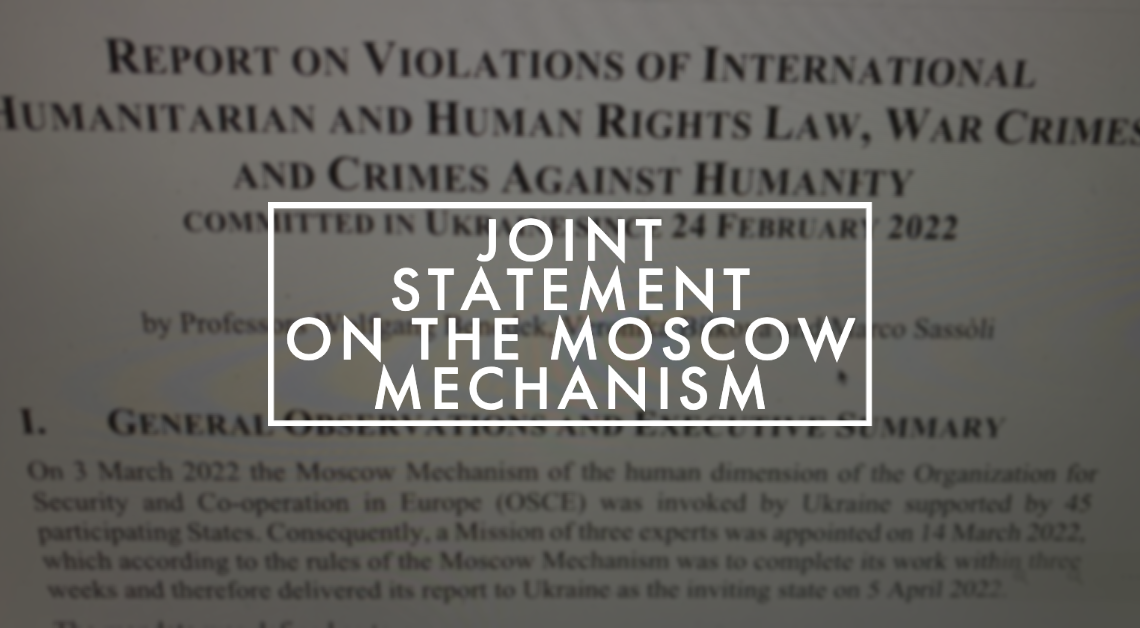 Unfortunately, the report from the independent experts confirms our fears.

As delivered by Ambassador Stelian Stoian, Permanent Representative of Romania to the OSCE
to the Permanent Council, Vienna
April 13, 2022

On Tuesday, April 12, 2022, OSCE participating States received the independent experts’ report of the Moscow Mission to address the human rights and humanitarian impacts of the Russian Federation’s invasion and acts of war, supported by Belarus, on the people of Ukraine, within Ukraine’s internationally recognized borders and territorial waters. The mandate for the experts was to:

Establish the facts and circumstances of possible cases of war crimes and crimes against humanity, including due to deliberate and indiscriminate attacks against civilians and civilian infrastructure; and to collect, consolidate, and analyze this information with a view to presenting it to relevant accountability mechanisms, as well as national, regional, or international courts or tribunals that have, or may in future have, jurisdiction.”

Our collective invocation of the Moscow Mechanism on March 3, 2022, with the support of Ukraine, reflected our shared concerns about the impact of Russia’s invasion. Unfortunately, the report from the independent experts confirms our fears.

While our capitals and delegations are still reviewing the 99-page report in detail, we would like to highlight a number of critical determinations made by the experts in the report’s Executive Summary.

-“If they (Russia) had respected their IHL obligations in terms of distinction, proportionality and precautions in attack and concerning specially protected objects such as hospitals, the number of civilians killed or injured would have remained much lower.”

-“Much of the conduct of Russian forces displayed in the parts of Ukraine it occupied before and after 24 February 2022, including through its proxies, the self-proclaimed ‘republics’ of Donetsk and Luhansk, violates IHL of military occupation”

The report has found “credible evidence suggesting that such violations concerning even the most fundamental human rights (right to life, prohibition of torture and other inhuman and degrading treatment and punishment) have been committed, mostly in the areas under the effective control of Russia or entities under overall control of Russia”

Furthermore, there are strong indications that crimes against humanity committed by Russian forces may have occurred pursuant to widespread or systematic attacks directed against a civilian population, with the report stating:

-“some patterns of violent acts violating International Human Rights Law (IHRL), which have been repeatedly documented in the course of the conflict, such as targeted killing, enforced disappearance or abductions of civilians, including journalists and local officials, are likely to meet this qualification. Any single violent act of this type, committed as part of such an attack and with the knowledge of it, would then constitute a crime against humanity.”

In terms of recommendations for additional actions, the report states that:

We appreciate that Ukraine has expressed its gratitude to the Mission of Experts for the “tremendous work accomplished”. We would also like to thank Professors Benedek, Bilkova, and Sassoli for their tireless work in preparing this report in such a short period of time. As stated, this report will require careful consideration and study, in the OSCE region and beyond. The broad conclusions, however, are clearly and compellingly presented. It is now upon participating States and the international community to ensure that we undertake the necessary actions. That includes follow-up in the OSCE through the further use of its human dimension tools and mechanisms.

Thank you Mr Chair, and I ask that this statement be attached to the journal of the day.