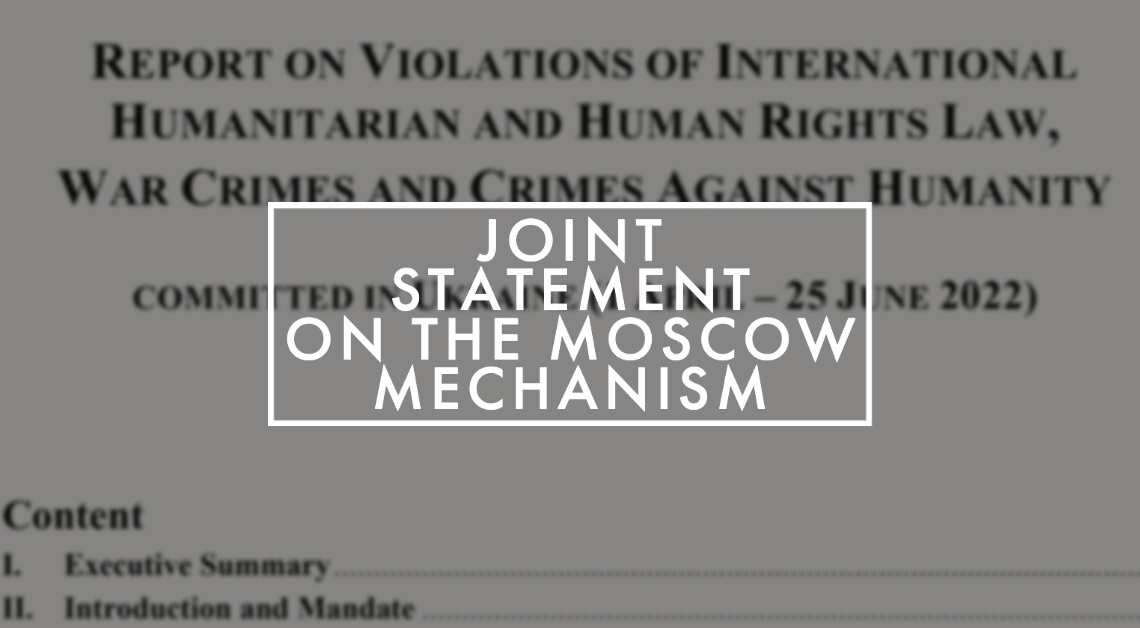 The report documents violations of international humanitarian law, and violations and abuses of human rights law, that may amount to war crimes and crimes against humanity committed in Ukraine between 1 April and 25 June 2022.

As delivered by Ambassador Eglantina Gjermeni, Permanent Representative of Albania to the OSCE
to the Permanent Council, Vienna
July 14, 2022

On 11 July OSCE participating States received the second independent experts’ report of the Moscow Mechanism. The report documents violations of international humanitarian law, and violations and abuses of human rights law, that may amount to war crimes and crimes against humanity committed in Ukraine between 1 April and 25 June 2022.

The mandate for the experts was to:
Consider, follow up and build on the findings of the Moscow Mechanism report received by OSCE participating States on 12 April 2022 addressing “human rights and humanitarian impacts of the Russian Federation’s invasion and acts of war, supported by Belarus, on the people of Ukraine, within Ukraine’s internationally recognized borders”.

We also requested that ODIHR provide any relevant information or documentation derived from the mission to other appropriate accountability mechanisms, as well as national, regional, or international courts or tribunals that have, or may in future have, jurisdiction.
Our collective invocation of the

While our capitals and delegations are still reviewing the 115-page report in detail, we would like to highlight a number of critical conclusions made by the experts in the report.

This report has shone a light on two new alarming trends.

The first is the reported “establishment and use of so-called filtration centres […] by the Russian armed forces”. “Civilians are detained for at least 30 days as part of a filtration process, with those deemed the most “untrustworthy” […] obliged to remain for two months.”

The second trend is the reported tendency of the “Russian Federation to bypass its international obligations by handing detained persons over to the so-called Donetsk and Luhansk People’s Republics and letting these two de facto entities engage in problematic practices, including the imposition of the death penalty resulting from trials that fail to meet the basic standards of the fair trial.” These entities have no international or domestic legal authority.

Furthermore, the second mission has “largely confirmed the conclusions reached by the first mission. It has discovered clear patterns of serious violations of IHL attributable mostly to Russian armed forces in many areas which its investigations referred to.” The report emphasises “the magnitude and frequency of the indiscriminate attacks carried out against civilians and civilian objects.” The events concerning the towns of Bucha and Irpin, which were visited by the mission, are two emblematic examples of these grave violations.

The independent experts note that Russia’s invasion has impacted both on Ukraine’s food security and global food security – exacerbated by the theft of Ukrainian grain and the suspension of movement of commercial vessels in the Sea of Azov.

As the report notes, “millions of tons of grain remain trapped in the Ukrainian ports and on ships unable to move, which significantly affects the global food and agricultural supplies threatening to result in a global hunger crisis.”

In terms of recommendations for additional actions, the report expands on the linkages between the Moscow Mechanism report and other accountability mechanisms and notes the role played by justice institutions.

We would like to thank Professors Bilkova, Guercio and Sancin for their tireless work in preparing this report in such a short period of time. As stated, this report will require careful consideration and study, in the OSCE region and beyond. The broad conclusions, however, are presented in a clear and compelling manner. We would like to express our support to Ukraine and its citizen’s. Now participating States and the international community must ensure we undertake the necessary actions – this includes making full use of the OSCE and its tools under the human dimension.