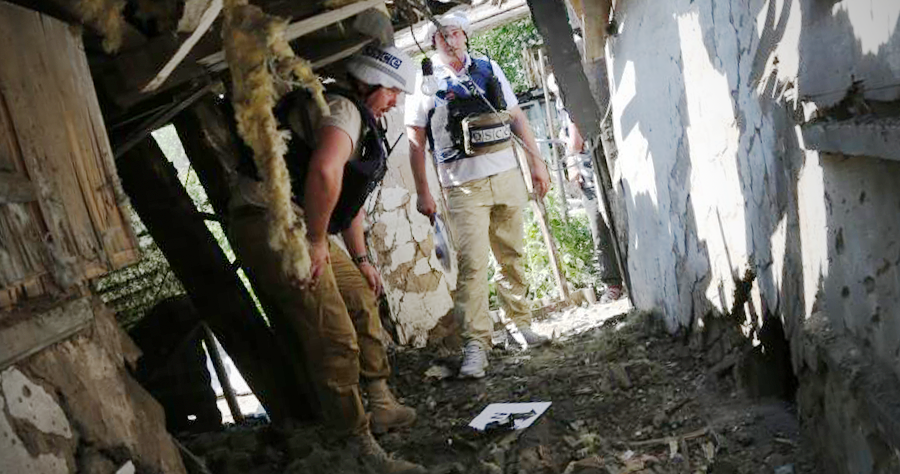 The last two weeks have seen increased fire from Russia-led forces – not just against Ukrainian positions, but Ukrainian population centers as well – particularly near Svitlodarsk. As many delegations have noticed, shell struck and killed Daria Kazemirova, a 15-year old girl in the Ukrainian-controlled town of Zalizne, as she was playing in the courtyard of her grandmother’s house. Russia continues to demonstrate callous disregard for civilians in the Donbas, and clear contempt for the sovereignty and territorial integrity of Ukraine. Mr. Chair, Russia started this conflict; Russia fuels it; and Russia must choose to end it.

Amid intensified fighting, the SMM observed a fivefold increase in the use of heavy weapons in the conflict zone last week, most of which appear to belong to Russia and its forces. The SMM found 20 heavy weapons in Russia-controlled territory, the location and use of which are prohibited by the Minsk agreements, including surface-to-air missiles, tanks, and mortars. By contrast, the SMM found only one such weapon in government-controlled territory.

Mr. Chair, the security situation underscores the profound need for progress on humanitarian issues. UNICEF estimates that every week one child is killed or maimed by explosive weapons or landmines. The lives of more than 220,000 children remain at risk. Russia-led forces remain dug in around key civilian infrastructure sites like the Donetsk Filtration Station, and fire with impunity around them; on May 17 a chlorine pipe was damaged from shelling. Poisonous chlorine gas could have spread to neighboring towns, jeopardizing thousands of lives, if the Station’s workers had not managed to shut off the pipe beforehand.

Mr. Chair, given this worsening situation, several steps can, and should be, taken to mitigate the human suffering and build positive momentum toward implementation of the Minsk agreements. International experts should be allowed to assess the risks posed by chemical and radiological sites in the conflict area, so that remedial measures can be taken before disaster strikes. Reports of incidences of tuberculosis and other preventable diseases in Russia-controlled areas are on the rise, underscoring the need for humanitarian aid organizations to be permitted to deliver lifesaving assistance to those who need it. And prisoners on both sides should be released on the basis of the “all-for-all” principle, as spelled out in the Minsk agreements.

Mr. Chair, we take note of the recent report by the Ukrainian Helsinki Human Rights Union documenting the horrific abuses Russia-led forces have committed against Ukrainian civilians and service members they have captured – including killings, torture, mock executions, and sexual violence. The United States calls on Russia to fully investigate these credible allegations and hold any perpetrators to account.

Regrettably, Russia has continued to abuse the population of occupied Crimea, choosing to ratchet up violence and intimidation against Crimea’s Tatar community. The United States condemns the abduction and beating of Crimean Tatar activist Asan Egiz near Simferopol on May 23 by men in police uniforms. We call on the occupation authorities to hold those responsible accountable. The United States also calls on Russia to bring to justice those responsible for the unsolved disappearances of Ervin Ibragimov and at least a dozen other Crimean Tatars since the occupation began. We are also concerned that Russian security forces raided the houses of the founders of the NGO “Crimean Solidarity” on May 21, and arrested an aide to the Chairman of the Crimean Tatar Mejlis. Russia must cease politically-motivated harassment and abuse of Crimean Tatars and other activists.

Mr. Chair, the United States remains deeply concerned about the condition of Ukrainian activists Oleh Senstov and the over sixty other Crimean political prisoners currently in Russian custody. Sentsov was arrested by Russian occupation authorities in Crimea on trumped-up charges, transported across an international border against his will, and languishes in a Russia prison. He has been on a hunger strike since May 14. Crimean political prisoners should be released immediately and allowed to return to Ukraine.

Mr. Chair, Russia’s aggression and conduct in Ukraine undermine the core principles and commitments of the OSCE, as well as our collective security. The United States fully supports Ukraine’s sovereignty, independence, and territorial integrity within its internationally recognized borders. We do not, nor will we ever, recognize Russia’s purported annexation of Crimea. Crimea-related sanctions on Russia will remain in place until Russia returns full control of the peninsula to Ukraine. We join our European and other partners in restating that our sanctions against Russia for its aggression in eastern Ukraine will remain until Russia fully implements its commitments under the Minsk agreements.