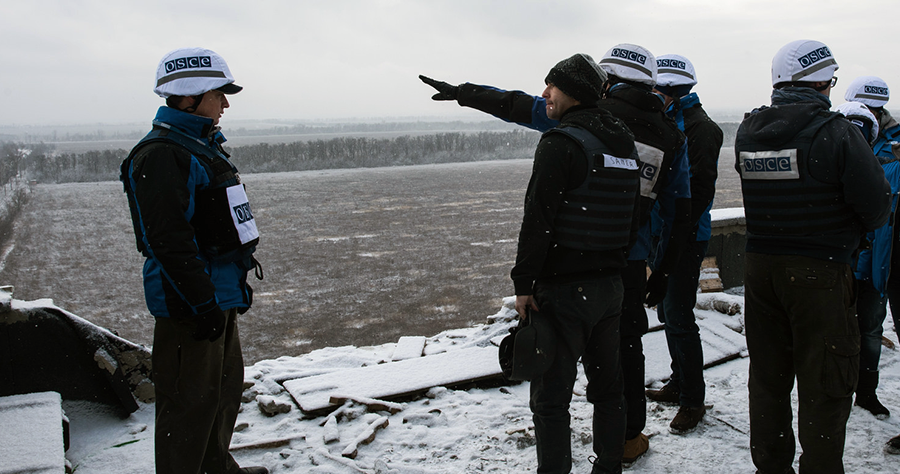 OSCE monitors at an observation post in Avdiivka – one of the hotspots in Donetsk region. OSCE/Evgeniy Maloletka

Mr. Chair, half-measures and empty pledges will not build confidence. The United States again calls on the Russian Federation, as the instigator in this conflict, to use its leverage with its proxies to decrease the violence in the Donbas. Russia must take steps to end the conflict that it started and continues to perpetuate.

The United States shares the concern you raised regarding the February 23 fighting that again forced the SMM to evacuate its patrol base in Popasna, a location well known by those party to the conflict. We call on the sides to refrain from placing their forces and firing their weapons in the vicinity of SMM patrols and installations.

Regrettably, hostile actions against SMM UAVs continue. Since we last met, the SMM reported three instances in which forces targeted SMM UAVs, one resulting in loss. The United States again condemns the targeting of SMM UAVs and calls for an immediate cessation of such acts.

Mr. Chair, as winter continues, the humanitarian situation in the areas controlled by Russia-led forces remains deplorable, and continued clashes have put civilians at grave risk. In multiple locations, the supply of power, water, heat, and mobile phone networks has been interrupted. The young and elderly are most at risk. It is imperative to protect critical infrastructure in the conflict zone. We call on Russia to return to the Joint Center for Control and Coordination, and to provide the security guarantees needed for repair teams to fix damaged infrastructure, and restore vital services.

Ukrainians living in the conflict area need humanitarian relief. Russia and the forces it backs can improve conditions for people living in the conflict area by opening – as they already promised they would – a new crossing point at Zolote. The continued Russian practice of sending so-called “humanitarian aid” convoys without allowing verification of their cargo, as again reported on February 22, must end. These convoys are a direct violation of Ukrainian sovereignty and territorial integrity. Restrictions on aid organizations in Russia-controlled areas must be lifted, and humanitarian relief must be delivered through an internationally recognized mechanism.

Mr. Chair, Russia-led forces continue with wanton disregard for the SMM’s mandate in the form of blatant access restrictions. In its February 21 report, the SMM noted that, in addition to restrictions on freedom of movement due to mines and unexploded ordnance, patrols encountered restrictions 22 times – all but one in areas outside of government control. Additionally, as has been the case since April 2017, the SMM continued to experience denials of access to Siedove, a town near the border with the Russian Federation. The SMM reports that on February 13, three so-called “DPR” militants told the SMM they were under orders not to let the SMM access the area. Previously – and contrary to the SMM mandate – so-called “DPR” authorities claimed that the town was among a number of restricted cities to which the SMM “was not permitted to travel.” Again, on February 22, Mr. Chair, the SMM was restricted in four of its six attempts to access areas along the internationally recognized Russia-Ukraine border by the forces that Russia arms, trains, leads, and fights alongside.

Russia regularly attempts to convince the Permanent Council here that it bears no responsibility for the conflict in the Donbas, despite overwhelming evidence to the contrary. Mr. Chair, It is no coincidence that Russia-led forces are responsible for the vast majority of restrictions placed on the SMM. They place restrictions on the SMM in the very areas where they do not want the monitors’ unbiased eyes to bear witness to their involvement. We echo the call by the EU and other participating States that the SMM monitors have full and unhindered access to the entire territory of Ukraine within its internationally recognized borders.

Mr. Chair, the United States once again calls upon Russia to end its campaign of repression in occupied Crimea, and to return control of Crimea to Ukraine. The United States is resolute in its support for Ukraine’s sovereignty, independence, and territorial integrity within its internationally-recognized borders. We do not, nor will we ever, recognize Russia’s purported annexation of Crimea. Crimea-related sanctions on Russia will remain in place until Russia returns full control of the peninsula to Ukraine. And we join our European and other partners in restating that our sanctions against Russia for its aggression in eastern Ukraine will remain until Russia fully implements its commitments under the Minsk agreements.