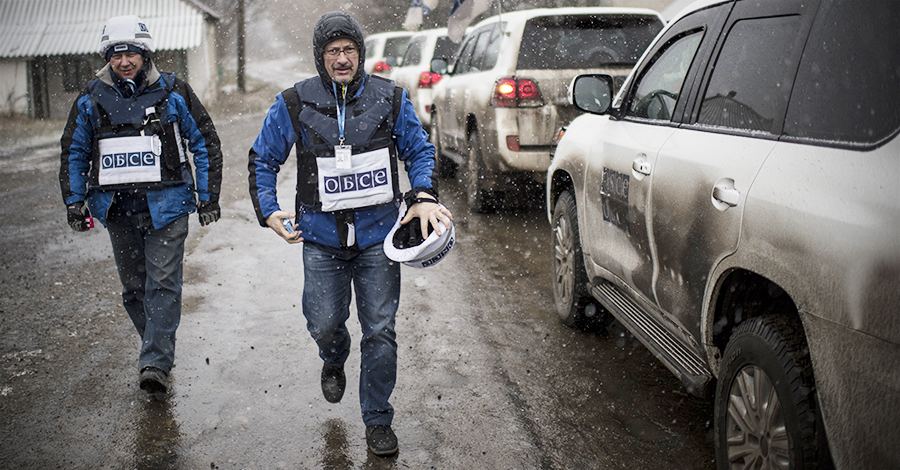 Mr. Chair, while endorsed by all participating States, the SMM’s mandate is violated regularly and overwhelmingly in the areas controlled by Russia’s proxies. On February 27, the SMM reported shots fired at an SMM UAV for the fifth consecutive week.

In its February 27 weekly report, the SMM informed that Russia-led forces routinely deny the SMM access to five areas along the internationally recognized border. During the same reporting period, the Mission’s freedom of movement was restricted 29 times: 28 of these 29 times in areas controlled by Russia-led forces and once in government-controlled areas.

Mr. Chair, we share your concern and that expressed by several other participating states earlier today over the alarming March 5 incident in which a militant, who was part of an organization funded and led by Russia, brandished his weapon at an SMM patrol traveling in areas north of Mariupol controlled by Russia-led forces. Even after the members of the SMM patrol identified themselves, the militant threatened them with deadly force. Thankfully this incident passed without harm. But it’s the latest in the series, a long series of provocations that puts our monitors’ lives at risk. The SMM is composed of citizens representing nearly all of our participating States.

Mr. Chair, Russia and the forces that it arms, trains, leads, and fights alongside acknowledge the SMM mandate only when it’s convenient for them. The mandate is a commitment to be upheld in full, not a menu from which we select when we desire. The United States joins the overwhelming majority of participating states here today in calling on Russia and its proxies to respect the SMM’s mandate, which includes safe and secure access throughout the entirety of Ukraine.

The United States also repeats its calls for Russia to return to the Joint Center for Control and Coordination to provide the security guarantees needed for repair teams to fix damaged infrastructure and restore vital services. Such actions would signal true concern for the people living in the conflict area and a willingness to provide verifiable humanitarian relief.

Mr. Chair, last week we marked four years since Russia’s illegal intervention, occupation, and attempted annexation of Crimea. Russia has waged a war against dissent, while it has militarized the peninsula and established a military outpost on the Black Sea. This week marks the four-year anniversary of the abduction of Crimean Tatar Reshat Ahmetov, who was detained following a protest against Russia’s occupation. His body was found two weeks later, bearing signs of gruesome torture. To date, no one has been held to account. Mr. Chair, this week also marks the four-year anniversary of the disappearances of Ukrainian activists Ivan Bondarets and Valerii Vashchuk, who called relatives to report that they had been detained by police after displaying the Ukrainian flag, and have not been heard from since. We call on Russia to bring the perpetrators to justice.

Mr. Chair, Russia’s blatant abuses of the rights of Crimean residents continues. We are troubled by the two-year suspended sentence and ban on civic activism handed down on March 1 to Crimean Tatar Suleiman Kadyrov in retaliation for a social media post stating that Crimea is Ukraine. We are also troubled by reports that occupation authorities are pressuring the population to participate in the illegitimate elections they intend to hold later this month. Mr. Chair, the United States joins several other participating states here in repeating our calls for Russia to cease its suppression of dissent in Crimea and grant access to Crimea for international human rights monitors.

The United States once again calls on Russia to end its campaign of repression in occupied Crimea, and to return control of Crimea to Ukraine. We are resolute in our support for Ukraine’s sovereignty, independence, and territorial integrity within its internationally recognized borders. We do not, nor will we ever, recognize Russia’s purported annexation of Crimea. Crimea-related sanctions on Russia will remain in place until Russia returns full control of the peninsula to Ukraine. We join our European and other partners in restating that our sanctions against Russia for its aggression in eastern Ukraine will remain until Russia fully implements its commitments under the Minsk agreements.