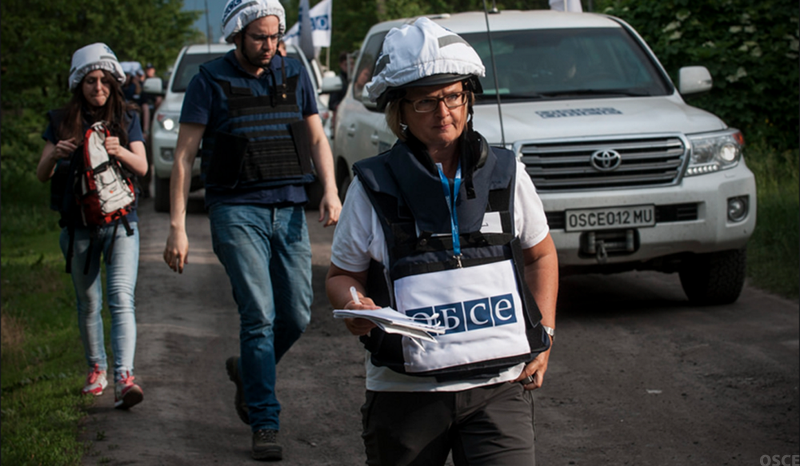 As the Secretary General warned last week, the Special Monitoring Mission to Ukraine is being subjected to a “deliberate effort to blind it.”  Within a single week, combined Russian-separatist forces shot down the SMM’s two long-range UAVs near Horlivka, and threatened to shoot down a mini-UAV sent by the SMM to search for wreckage of the downed UAVs.  Combined Russian-separatist forces also sabotaged OSCE cameras outside of Donetsk, which are critical to monitoring volatile hot spots like the area between Avdiivka and Yasnyuvata, and they have refused to allow the SMM access to fix them.  OSCE reporting confirms that combined Russian-separatist forces are responsible for over 80 percent of the SMM access restrictions, especially in hotspots like Avdiivka and along Ukraine’s border with Russia.

This deliberate effort to blind the SMM is intended to conceal from the international community the buildup of combined Russian-separatist forces in eastern Ukraine, the advanced Russian weaponry these forces have in their arsenal, and the military personnel and materiel that regularly cross the border from Russia into Ukraine.  This calculated effort is part of a strategy of deception undertaken by the Russian Federation to cover up its ongoing aggression against Ukraine.  We witness this strategy of deception during each Permanent Council, when Russia denies it is involved in the conflict – despite overwhelming evidence to the contrary — and seeks to distract us by blaming Ukraine for the failure to implement the Minsk agreements.

Even the combined Russian-separatist forces’ calculated efforts to blind the SMM cannot conceal the scale and sophistication of weapons and equipment flowing into Ukraine from Russia.  So far in June, the SMM has documented likely Russian military equipment, personnel, and weapons in separatist-controlled areas.  On June 5, international monitors spotted a convoy of 42 military supply trucks in separatist-held Luhansk.  The same day, the SMM observed 11 military-type trucks, including one command vehicle, two infantry fighting vehicles, and two multi-purpose light-armored vehicles in separatist-held Luhansk.  On June 1, the SMM observed two armored reconnaissance vehicles, six armored personnel carriers, 19 command vehicles, 28 military-type trucks, and a bus carrying armed personnel in a residential area of Luhansk city.  Also on June 1, the SMM counted 24 tanks in Donetsk city.  Such sightings of equipment could not possibly be, as Russia claims, fielded solely by separatist units made up of disgruntled miners, factory workers, and other residents of Donetsk and Luhansk.  Colleagues, we should remember that President Putin himself told us as much, when he acknowledged last December in an interview that Russia was involved in the so-called “military sphere” in Ukraine.

Russia-backed separatist forces use this advanced weaponry and equipment to put civilians at risk.  SMM monitors spoke with residents of Donetsk city who said that separatist fighters position themselves on the roofs of their homes, launch mortar attacks, and then run – leaving the civilians to face defensive fire from Ukrainian soldiers.  According to press reports, Russia-backed separatist have fired salvos at Ukrainian positions from a water treatment plant, using the chlorine canisters stored there as a deterrent to Ukrainian return fire, as their rupture would cause a local environmental disaster.  There is no justification for these acts that intentionally place civilians and civilian infrastructure at risk.  The real intent is to portray Ukraine, rather than combined Russian-separatist forces, as putting civilians at risk.

Colleagues, this is a critical time, and we cannot afford missteps and mixed signals.  Russia has shown no signs of reversing its aggression; rather, it has raised the level of violence.  In May alone, 31 Ukrainian soldiers were killed and 116 were injured, the highest single-month casualty figures since August 2015.  So far in June, three Ukrainian soldiers have been killed and 41 have been wounded.

Sanctions imposed for the Russian Federation’s aggression in eastern Ukraine will remain in place until Russia fully implements its Minsk commitments, including: a real, comprehensive, and sustained ceasefire in eastern Ukraine; full access for the OSCE to the area affected by the conflict; elections under Ukrainian law that meet OSCE standards and are monitored by the OSCE Office for Democratic Institutions and Human Rights; the withdrawal of foreign forces and equipment; and the return to Ukraine of full control over its international border.

We recall that Russia’s aggression against Ukraine is not limited to the Donbas, but began with its occupation and attempted annexation of Crimea.  Russia must put an end to its mistreatment of the Crimean Tatar people and all others who refuse to recognize its attempted annexation of the peninsula.  Occupation “authorities” have harassed and intimidated Crimean Tatar activists, conducted intrusive and unwarranted searches at Tatar mosques, schools, and homes, and initiated administrative and criminal proceedings against scores of Crimean Tatars. 20,000 people have fled Crimea since the start of the occupation.  We remind the Russian Federation that Crimea-related sanctions will continue until it ends the occupation and returns the peninsula to Ukraine.