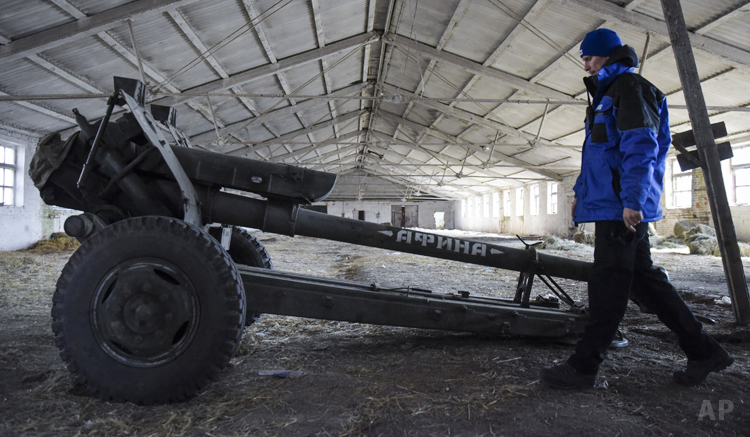 In this March 2015 photo, an OSCE monitor inspects a cannon stored by Russia-backed separatists in eastern Ukraine. (AP Photo/Mstyslav Chernov)

The United States welcomes Ambassadors Apakan and Sajdik back to the Permanent Council and thanks them for their efforts to peacefully resolve the conflict in eastern Ukraine. We must take this opportunity to build on the September 1 ceasefire re-commitment and the Framework Decision on Disengagement, effective September 21. From September 19 to 25, Ukraine saw the lowest number of ceasefire violations in the conflict zone in five weeks. We must lock in these gains with full disengagement at the three agreed-upon hotspots, and by identifying new zones for further disengagement.

We are glad to see that disengagement has occurred in one of the three sites and preparations have begun in the other two sites. We call on all parties to fulfill their commitments under the Framework Decision on Disengagement to allow implementation to proceed, including a comprehensive seven-day ceasefire at the sites. Full and unfettered access for the SMM is also essential to verify and monitor disengagement and fulfill its wider mission.

Russia and the separatists it backs must end their systematic efforts to blind the SMM. Combined Russian-separatist forces continue to be responsible for the majority of access restrictions, including delaying and harassing monitors, jamming UAVs, and disabling the SMM camera outside Donetsk City.

We hope these issues can be resolved and that disengagement proceeds, we note that any attempt by the separatists to seize additional territory will constitute a clear demonstration of bad faith. Let us not forget that combined Russian-separatist forces seized Debaltseve just days after signing the Minsk Package of Measures in 2015.

Russia’s intervention extends to Crimea as well as eastern Ukraine. At the Human Dimension Implementation Meeting in Warsaw last week, participating States heard first-hand from civil society organizations that, under the Russian occupation, the human rights situation in Crimea is bleak and continues to deteriorate. The International Partnership on Human Rights, for example, has documented the deaths, disappearances, illegal detentions, and the displacement of tens of thousands of people since the start of the occupation. Just last week, the Russian Supreme Court upheld a ban on the Crimean Tatar self-governing body, the Mejlis. We reject the characterization of the Mejlis as an “extremist organization” and condemn the suspension of this democratic institution. This decision is particularly troubling given Russia’s systematic and unjust mistreatment of Crimean Tatars, who are subject to arbitrary arrests, abductions, politically motivated prosecutions restrictions on freedom of movement, and police raids on their homes and mosques. We call on Russia to cease these unacceptable practices immediately.

We do not recognize Russia’s attempted annexation of Crimea, and we reiterate our call on Russia to return control of the peninsula to Ukraine.

Crimea-related sanctions will remain in place until Russia ends its occupation and attempted annexation of Crimea and Russia returns control over the peninsula to Ukraine.

In closing, Ambassadors Sajdik and Apakan, let me thank you again for your reports to the Permanent Council, and for your continued commitment to facilitating the peaceful resolution to Russia’s aggression against Ukraine.

Ambassador Apakan, we heard and acknowledge your call for continued support to the SMM as they carry out these vital and complex tasks, and please also convey our gratitude to your mission’s monitors and staff, unarmed civilians who are operating in an active conflict zone. We all benefit from their courage and their efforts.

As delivered by Charge d’Affaires Kate M. Byrnes to the Permanent Council, Vienna, in response to reports by the OSCE’s Chief Monitor in Ukraine, Erteğrul Apakan, and the Chairperson-in-Office’s Special Representative in Ukraine, Martin Sajdik