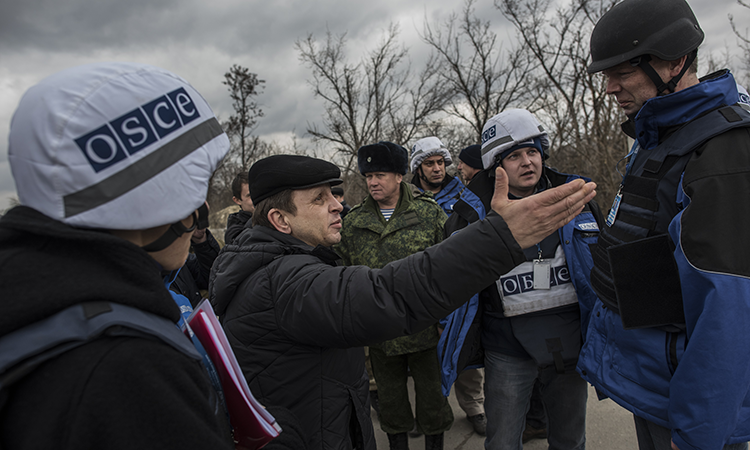 Despite efforts to build on the Easter ceasefire recommitment and create a better security environment, this week began with the highest casualties incurred since August of last year. The security zone in eastern Ukraine continues to be defined by tension and instability, as Special Monitoring Mission (SMM) Deputy Chief Monitor Alexander Hug said this week. Combined Russian-separatist forces increased their attacks while simultaneously obstructing SMM monitors, preventing them from accounting for those ceasefire violations. Coordinated attacks by combined Russian-separatist forces on May 24 resulted in the heaviest losses suffered by Ukrainian forces in a single day this year: seven killed and nine wounded.

Russia continues to arm, train, and fight alongside separatist forces, and the security zone remains awash in heavy weapons, tanks, armored personnel carriers, and anti-aircraft guns. These weapons appear in part of the conflict zone one day, vanish the next, and then reappear somewhere else, undermining confidence between the sides and efforts toward a sustainable ceasefire and Minsk implementation. On May 15 alone, the SMM counted 81 tanks on separatist-held territory. Regrettably, combined Russian-separatist forces have not hesitated to put these weapons to use, pounding residential areas of Avdiivka with mortars and artillery fire on May 21 and 22, killing two Ukrainian soldiers, wounding eight others, and damaging or destroying six homes. These attacks were premeditated and came shortly after combined Russian-separatist forces disconnected the SMM’s static observation cameras in Donetsk, cameras they had promised the SMM could operate without interference.

Colleagues, the Permanent Council has often heard the Russian Federation call for intensive monitoring of hotspots. We call on Russia to direct the separatists it backs to immediately allow the SMM full access to the areas under their control and to restore its cameras, which are essential to monitoring hotspots that are too dangerous for monitors to patrol.

It is essential that Russia and the separatists agree to a disengagement plan, which can then be endorsed by the Trilateral Contact Group as quickly as possible. Many of the proposed locations for disengagement are at crossing points on the line of contact. In this regard, we note that the Government of Ukraine has already taken steps that will support disengagement efforts. In keeping with its agreement to open up more crossing points, Ukraine has cleared mines and constructed proper crossing facilities at its checkpoint in Zolote. The separatists have not upheld their commitments – neither to allow civilians to cross nor to pull back the heavy weapons that put lives at risk. Civilians are subjected to kilometers-long lines, and are exposed to the ever-present risk of getting caught in crossfire. We, therefore, underscore the need for an agreement on disengagement – not only to stabilize the ceasefire, but to improve the lives of people living on both sides of the contact line.

Colleagues, over the last few months fresh evidence has come to light of Russia’s continued supply of sophisticated military equipment to the separatists – in clear contravention of measure 10 of the Minsk Package of Measures. A SMM UAV recently took a photo of a Russian Orlan-10 UAV flying from the direction of separatist-held parts of Donetsk. The Orlan-10 is a Russian system; it is not commercially available and can only be flown by trained operators. The Ukrainian military reported that an armed UAV dropped munitions on Ukrainian soldiers on May 18. The SMM once again found evidence of Russian jamming equipment, an IVO Mineralny antenna, on separatist-held territory on April 12. The presence of sophisticated military technology on the battlefield exposes the fallacy of Russia’s contention that this is an internal conflict; it is Russia which instigated this conflict, Russia which has fueled it, and Russia which must now act to end it.

Resolving this conflict requires the return of separatist-controlled areas of Donetsk and Luhansk to Ukrainian control. On this the Minsk agreements are crystal clear. We therefore condemn the decision by the Russian Federation to accept phony separatist “passports” as valid for crossing between Ukraine and the Russian Federation.

In Russia-occupied Crimea, Russia continues to violate the rights of those who oppose the occupation, including members of religious and ethnic minorities – in defiance of OSCE principles and commitments. Russian authorities have shut down Crimean Tatar media. Russian forces have raided homes and mosques, and harassed and imprisoned Crimean Tatar activists, some of whom have disappeared or been killed. Having banned the Mejlis – the legal, legitimate representative body of the Crimean Tatar people – Russian authorities have accelerated a crackdown on its leadership. On May 12, the Deputy Chairman of the Crimean Tatar Mejlis, Ilmi Umerov, was arrested, along with three others. We remind the Russian Federation that sanctions related to its occupation of Crimea will remain in place until the occupation ends. And we join the EU in many times reaffirming that sanctions imposed upon the Russian Federation for its aggression in eastern Ukraine will also remain in place until Russia fully implements its Minsk commitments.