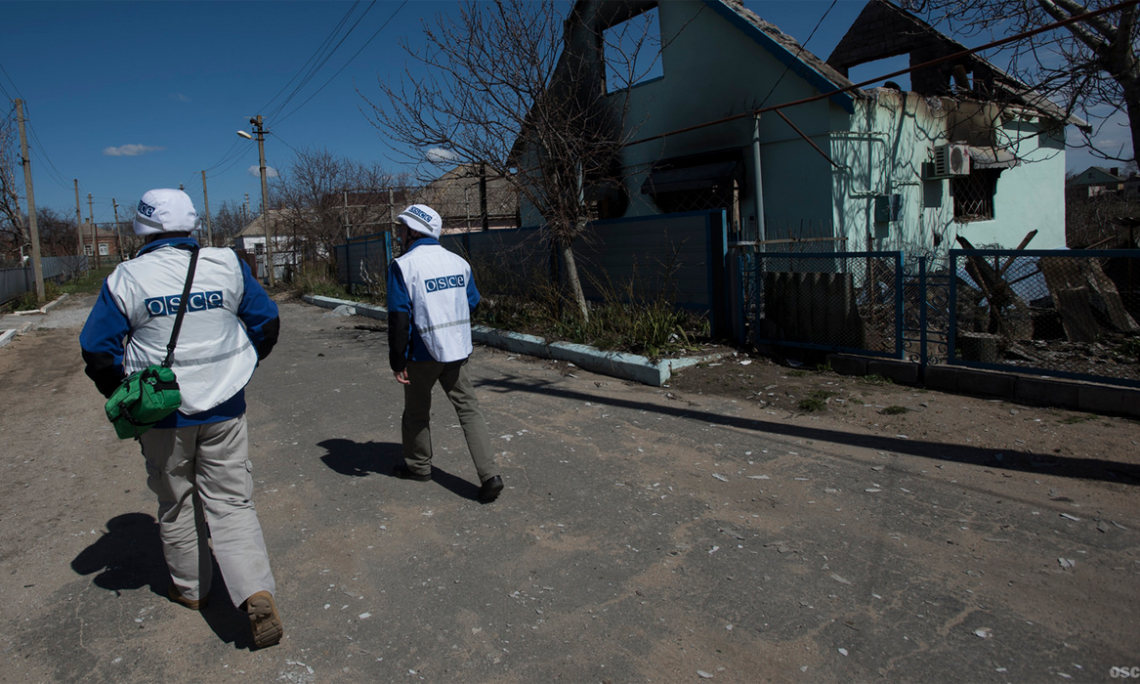 The United States is deeply concerned about the deteriorating situation in the conflict zone in eastern Ukraine. Combined Russian-separatist forces have stepped up the violence, fired banned heavy weapons from civilian areas, and have continued to obstruct the work of the OSCE Special Monitoring Mission, including threatening monitors, shooting down an SMM UAV, and disabling SMM surveillance cameras. The situation is particularly troubling because just one week ago, Ukraine proposed a detailed disengagement plan, which, had it been implemented, would have contributed to a significant de-escalation of the conflict. Instead, Russia refused to engage in negotiations on de-escalation in a May 25 meeting of the Joint Center for Coordination and Control, and combined Russian-separatist forces dramatically escalated the fighting, causing Ukraine to suffer its worst casualties since August 2015. In fact, the fighting has grown deadlier every month this year: one Ukrainian soldier was killed in action in January, six in February, twelve in March, fifteen in April, and twenty-seven in May. This steady escalation in violence must be reversed.

Combined Russian-separatist forces have simultaneously increased attacks while restricting the SMM from fulfilling its mandate. On May 27, the SMM’s camera in Shyrokyne recorded machine gun fire from separatist areas before Ukrainian forces returned fire. Also on May 27, combined Russian-separatist forces carried out an incursion across the contact line into government-controlled Avdiivka, leaving three casualties in government-controlled territory as proof of this aggressive act. Residents of Donetsk city told the SMM that “DPR” members fired from rooftops before withdrawing, and had even “asked to fire mortars from the roof of a house.”  Such tactics put civilians in danger by provoking Ukrainian forces to return fire. As a result of such actions, the SMM reported an increase in the shelling of civilian areas by both sides in the conflict. The number of explosions in Donetsk alone increased by almost 75 percent over the past week as combined Russian-separatist forces resumed firing proscribed, destructive 152mm artillery, reversing the decline in heavy weapons use in a deliberate escalation.

The surge in ceasefire violations correlates, once again, with acts of violence, intimidation and denial of access against the SMM. The SMM must have full, safe, and unfettered access throughout the entire conflict area. We condemn the incident on May 27 in which a separatist fighter fired warning shots in the air before taking aim with his assault rifle at a SMM vehicle to force a SMM patrol to turn around. We also condemn another incident, on May 28, in which a SMM foot patrol at the contact line came under fire, apparently from forces in government-controlled territory. We regret that the Joint Center for Coordination and Control has failed to investigate any such incidents.

Colleagues, in the Permanent Council, we hear the Russian Federation call for 24/7 monitoring of hotspots, but the actions of the combined Russian-separatist forces stand in stark contrast to the words spoken here. These forces appear to be preparing the battlefield for further action while trying to prevent the SMM from observing the situation and reporting on it to the international community. As our Ukrainian colleague shared with us a few moments ago: the SMM reported in today’s report an unusual build-up and amassing of heavy weapons and personnel carriers in Donetsk and Luhansk cities, including 24 tanks in Donetsk city alone. The SMM camera that combined Russian-separatist forces disabled near Donetsk on May 20 remains inoperable due to separatist interference. On May 27, combined Russian-separatist forces shot down the SMM’s long-range UAV just after it recorded a Strela-10 surface-to-air missile in “DPR”- controlled territory.

The Strela-10 surface-to-air missile that the SMM’s UAV recorded, the kind of weapon unavailable to separatists without Russian support, is even more evidence of direct Russian involvement in the conflict. Similarly, the Orlan-10 UAV photographed flying over Ukrainian territory the week before would not be available to separatist forces without Russian help. Russian supplies, equipment, and personnel continue to flow from Russia into Ukraine. At the Izavaryne crossing, along the part of Ukraine’s international border with Russia that Ukraine does not control, the SMM observed a large number of personnel who were “well equipped, armed and wore a distinctive green uniform without insignia.”  These individuals refused to speak to the SMM. We note the SMM still has not received from the separatists the security assurances needed to allow the SMM to open new forward patrol bases near the international border and be able to effectively monitor the flow of fighters, weapons and equipment into Ukraine.

Colleagues, the way forward is clear: Stopping the violence must be the first priority so we can make further progress on implementing the political aspects of the Minsk agreements. There must be immediate work on disengagement in the Trilateral Contact Group and its security working group – and the political will to carry out fully any new agreements. Russia must compel the separatists it backs to end the violence on the contact line, which it demonstrated the ability to do when the September 1, 2015, ceasefire went into effect.

As fighting worsens, it is the people of Ukraine who bear the highest cost. We note the rising number of civilian casualties from landmines and unexploded ordnance. The problem seems especially acute in separatist-held areas, where the SMM reported tragic incidents in which children were injured while playing catch with an anti-tank round and by stepping on a landmine. In contravention of a commitment made to open the civilian crossing point at Zolote, Russia-backed separatists have instead placed six new anti-tank mines there.

The exchange and release of detainees on the basis of the “all for all” principle in the Minsk Package of Measures is a much-needed confidence building measure. It is also imperative that the Russian Federation put an end to imprisoning Ukrainian citizens on trumped up, politically-motivated charges. The release of Nadiya Savchenko does not relieve the Russian Federation of its responsibility to free Stanislav Klikh, Mykola Karpyuk, Akhtem Ciygoz, Oleg Sentsov, Aleksander Kolchenko, Yuriy Soloshenko, Olexandr Kostenko and all other Ukrainian citizens it has wrongfully imprisoned.

Russia must also put an end to its mistreatment of the Crimean Tatar people and all others who refuse to recognize Russia’s attempted annexation of Crimea. The occupation authorities have harassed and intimidated Crimean Tatar activists, conducted intrusive and unwarranted searches at Tatar mosques, schools, and dozens of homes, and initiated administrative and criminal proceedings against scores of Crimean Tatars on trumped up charges. We are concerned by reports that Erwin Ibrahimov, a board member of the Coordination Council of the World Congress of Crimean Tatars, has gone missing in Crimea. We remind the Russian Federation that economic sanctions against it will continue until it ends its occupation.

Sanctions imposed for the Russian Federation’s aggression in eastern Ukraine will also remain in place until Russia fully implements its commitments in the Minsk agreements, including a real, comprehensive, and sustained ceasefire in eastern Ukraine; full access for the OSCE to the area affected by the conflict; elections under Ukrainian law that meet OSCE standards and are monitored by the OSCE Office for Democratic Institutions and Human Rights; the withdrawal of foreign forces and equipment; and the return to Ukraine of full control over its international border.

As delivered by Ambassador Daniel B. Baer to the Permanent Coouncil, Vienna