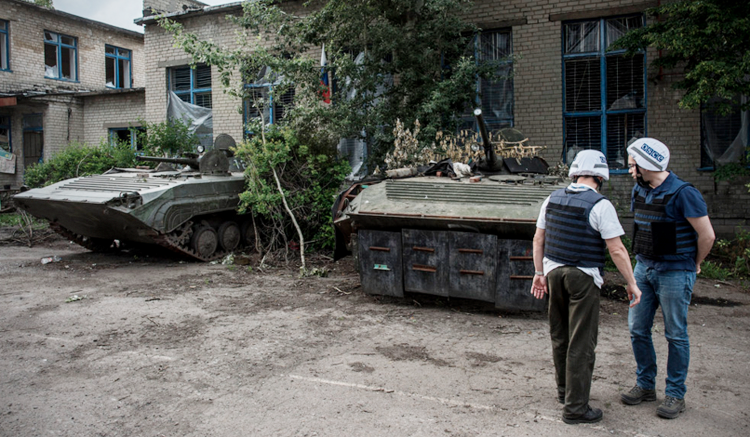 The United States remains deeply concerned about the sharp uptick of attacks launched by combined Russian-separatist forces in eastern Ukraine. On July 19 alone, seven Ukrainian soldiers lost their lives and 14 others were injured, the highest number of casualties in a single day this year. Combined Russian-separatist forces are taking provocative actions even in what had been relatively quiet areas along the line of contact. Luhansk had been quiet over the past six months, partly because a river served as a natural barrier dividing the sides. However, combined Russian-separatist forces have initiated a dangerous escalation in Stanitsya Luhanska, where they crossed the river and set up a new position in government-controlled territory. This transformed Stanitsya Luhansksa into a new hotspot, further endangering the local population. As a result of this provocative action, ceasefire violations surged more than sevenfold in Luhansk over the past week, according to reports from the Special Monitoring Mission (SMM).

Colleagues — a real ceasefire, followed by the disengagement of forces, would create the circumstances necessary for progress on the political aspects of Minsk. Yet for the third week in a row, the SMM was denied access to proposed sites for disengagement, yet another setback in making this vital stabilization measure a reality. The SMM has also encountered problems with the Joint Center for Control and Coordination (JCCC). The SMM reported that on July 16, a Russian Armed Forces representative to the JCCC refused to provide the SMM information on ceasefire violations in the hotspot of Yasynuvata. Rather than obstruct the SMM, the JCCC should be part of the solution to the conflict. Strengthening the JCCC would be a positive step, as the European Union told the Permanent Council last week and repeated this week. Ukraine has put forward a proposal to strengthen the JCCC’s ability to monitor the ceasefire and end the impunity for violations, which the United States sees as a good starting point.

As Deputy Chief Monitor Hug has said, “Without monitoring, there can be no verification; without verification, no trust; without trust, no lasting end to the violence.” That’s why unfettered, unrestricted, and unlimited SMM access, particularly to border areas, is so important. Russian-separatist forces are responsible for the majority of the restrictions placed upon the SMM. We call on Russia and the separatists it supports to stop their systematic efforts to restrict SMM access and to blind the SMM by jamming and shooting down its UAVs.

Russia has told the Permanent Council that the SMM has access to the border. This is not true in any meaningful sense. Combined Russian-separatist forces grant the SMM access only sporadically and only when, as Deputy Chief Monitor Hug points out, there is nothing for monitors to see. In the meantime, the buildup of Russian heavy weapons and personnel in eastern Ukraine continues. In Donetsk City, a SMM UAV recently spotted a “huge arsenal,” including 23 T-72 tanks, multiple launch rocket systems, self-propelled artillery systems, and up to 60 military trucks. Given the proximity to the line of contact, each of these weapons constitutes a violation of the terms of the Minsk agreements. Real and sustained SMM access to the border would be a signal to Ukraine and the international community that the combined Russian-separatist forces are ready to resolve the conflict using peaceful, diplomatic means.

Until then, the people of Ukraine on both sides of the contact line will continue to pay a high price. The UN estimates the conflict continues to kill an estimated 10 civilians each month, and has already claimed over 9,400 lives, with over 2.2 million people displaced from their homes. This conflict continues to disproportionately affect civilians, including children. Five children have died in recent weeks alone — a tragic reminder of the real human cost of the conflict. SMM reports continue to highlight the hardships of those civilians crossing the contact line, including people who have collapsed while enduring long wait times and high temperatures.

The human cost of the conflict includes detainees. Combined Russian-separatist forces have halted progress on the exchange of detainees, including the sick and wounded, and continue to prevent the International Committee of the Red Cross from accessing them. We call on combined Russian-separatist forces to complete the exchange of sick and wounded detainees — a step the Ukrainian side has indicated it stands ready to take — and fulfill the commitment in the Minsk agreements to ensure the release of all hostages and detained persons.

Finally, Russia continues to violate international law through its occupation and attempted annexation of Crimea. Once again, we call on Russia to put an end to its oppressive and discriminatory treatment of the population in Crimea, which remains part of Ukraine. Reports of Russia’s systematic repression of Crimean Tatars include allegations of unjust detentions, kidnapping and torture, and arbitrary searches of Crimean Tatars’ homes and places of worship. Earlier this week, Crimean Tatar residents held a prayer service for Erwin Ibrahimov, a board member of the Coordination Council of the World Congress of Crimean Tatars, who has been missing in Crimea since May. We are deeply concerned about Mr. Ibrahimov’s alleged kidnapping, and the fact that it remains unaddressed by occupation authorities. Our Crimea-related sanctions will remain in place until Russia ends its occupation and attempted annexation of Crimea and returns control over this land to Ukraine. Separately, we join the European Union in reminding that our sanctions against Russia for its aggression in eastern Ukraine will also remain until Russia fully implements its Minsk commitments.