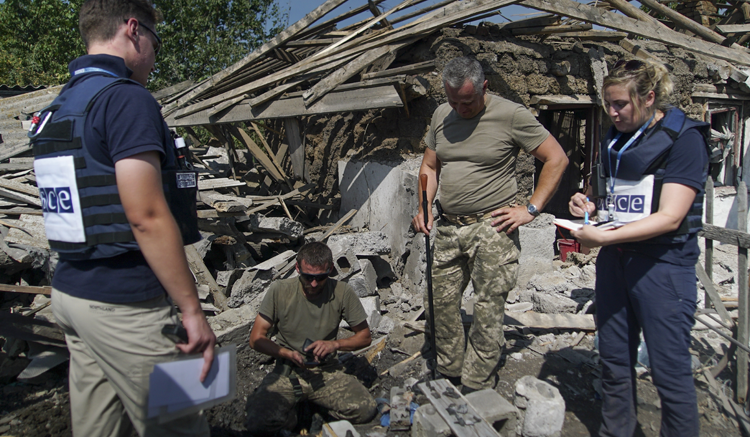 As we mark two years after the September 5 Minsk Protocol of 2014, and soon the September 19, 2014 Minsk Memorandum, we must pause and reiterate the urgency of pursuing peace and the full implementation of those documents.

The people of Ukraine deserve peace. The September 1 school-year ceasefire recommitment is an important opportunity to make progress in restoring security throughout eastern Ukraine and implementing the Minsk agreements. The next step to sustain the ceasefire recommitment is the disengagement of forces along the line of contact. Ukraine has made concrete proposals and identified specific sites where forces can be pulled back and conflict de-escalated. Russia and the separatists must move forward on an agreement for disengagement.

Combined Russian-separatist forces must immediately grant the SMM full, unfettered access in order to verify the ceasefire. However, these forces continue to methodically and systematically blind the SMM, preventing it from fulfilling its mission and missing an opportunity to build trust along the line of contact, where the proximity of forces has contributed to ceasefire violations. A recent SMM report showed that separatist forces have been responsible for over 80 percent of all access restrictions since January.  Additionally, combined Russian-separatist forces have shot down and jammed so many of the SMM’s UAVs that on August 12 the company that flies these aircraft cancelled its contract, leaving the mission without important monitoring capabilities. And just this week, separatists disconnected one of the SMM’s surveillance cameras near Donetsk city and stole some of the SMM’s equipment. Combined Russian-separatist forces must reverse their deliberate strategy of preventing the SMM from fulfilling its mandate.

Despite efforts by combined Russian-separatist forces to blind the SMM and disguise the flow of personnel and weapons from Russia into Ukraine, monitors continue to document clear evidence of Russia’s direct role in sustaining the conflict. On July 28, the SMM spotted another Zhytel mobile jamming station hidden in “DPR”-controlled territory. The same day, the OSCE Observer Mission at the Russian checkpoints of Gukovo and Donetsk saw a vehicle with Russian license plates enter Russia from separatist-controlled territory, carrying people in military-style outfits. On September 3, the SMM observed a convoy of 29 trucks being escorted by a vehicle from the so-called “DPR military traffic police;” the license plates on the trucks had been removed or covered, but one cover had slipped to reveal a license plate from the Russian Federation. The SMM also continues to document the presence of heavy weapons in separatist-controlled territory. On August 12, the SMM reported the presence of 47 multiple launch rocket systems, and on August 25, it identified 117 armored vehicles, all in separatist-held Luhansk. The quantity and sophistication of the weaponry and equipment the SMM has reported in separatist-controlled territory can only be explained by Russian support.

We remain deeply concerned by continued reports of combined Russian-separatist forces harassing and threatening SMM monitors. We are also concerned that Russian military personnel in the Joint Center for Coordination and Control have consistently refused to take action to respond to ceasefire violations, threats against the SMM, and other forms of interference with SMM operations. By contrast, we appreciate that Ukrainian military representatives to the JCCC have followed up on an August 12 incident of Ukrainian military personnel threatening SMM monitors, and briefed the SMM on disciplinary actions taken against the accused personnel.

Russia’s aggression against Ukraine is not, unfortunately, limited to the Donbas; its occupation of Crimea continues. Russia continues to crack down on independent voices there. Two deputy heads of the Crimean Tatar Mejlis, Akhtem Chiigoz and Ilmi Umerov, are being subjected to show trials in retaliation for their opposition to the occupation. Umerov was released only yesterday from weeks of forced psychiatric detention that caused a dramatic decline in his health – an abusive and arbitrary act reminiscent of Soviet-era practices.

We note with concern that Russia continues to hold Ukrainian prisoners in Russia and in occupied Crimea. The world has not forgotten Oleg Sentsov, Oleksander Kolchenko, Stanislav Klykh, Mykola Karpiuk, and Oleksander Kostenko, all serving sentences on baseless charges.  We call on Russia to release these individuals and all other Ukrainians it is holding on political pretexts.

Sanctions related to Russia’s occupation and attempted annexation of Crimea will remain in place until Russia returns the peninsula to Ukraine. We join the European Union in recalling that sanctions imposed on Russia for its aggression in eastern Ukraine will also remain in place until Russia fully implements its Minsk commitments. Russian actions in Ukraine are a clear violation of Russia’s international obligations and contravention of its OSCE commitments, and demonstrate Russia’s disregard for the principles that underpin European security.