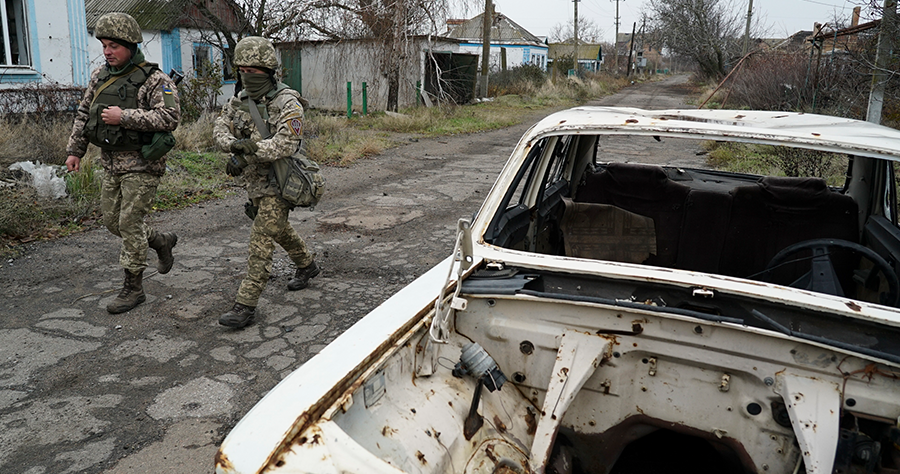 Last week we concluded the fifth OSCE Ministerial since Russia’s illegal seizure of Crimea and its subsequent military incursion into the Donbas. In these five years, Russia has sought to systematically destabilize Ukraine through perpetual violations of its sovereignty and territorial integrity amid a massive disinformation campaign. Russia’s mockery of our shared OSCE principles and commitments has extinguished more than ten thousand lives and left another forty thousand people wounded.

Russia’s invasion of Ukraine has strengthened the resolve of the trans-Atlantic community. Sanctions regimes have expanded. The Ukrainian public is more unified and European-oriented. Conversely, living conditions for Russian-speaking Ukrainians in the Donbas are undeniably worse than in the rest of the country.

By continuing on its path of aggression, Russia only further isolates itself and obscures the possibility of a better future for itself and its neighbors. Last week in Milan we all saw that, on the issue of Ukraine, Russia is alone and on the wrong side of history. In order to rejoin the community of nations, Russia must rethink its approach, respect international law, and fulfill its OSCE commitments.

During the Milan Ministerial, the United States challenged the OSCE to confront the polite fiction at the heart of this institution that turns a blind eye as Russia attacks fellow OSCE participating States, kills their civilians, shoots down civilian aircraft and SMM drones, denies monitors access to Crimea, and habitually holds snap exercises while impeding normal OSCE business, all the while paying a paltry four percent of the budget of this organization and claiming to be an OSCE participating State in good standing. As US Assistant Secretary of State Wess Mitchell stated in Milan, the OSCE must confront this reality or expect to lose relevance in the 21st century.

Mitchell also made clear last week that Russia’s blocking of the Kerch Strait and subsequent unprovoked aggression in the Black Sea on November 25 constitutes a violation of international law. The United States calls on Russia to immediately release the 24 captured Ukrainian personnel and the three vessels it has unlawfully seized, and to keep the Kerch Strait open to vessels transiting to and from Ukrainian ports. On December 5, the SMM reported that for 10 days Russia obstructed vessels attempting to access major Ukrainian ports by transiting the Strait. This is another brazen violation of international law, and the United States calls on Russia to immediately cease impeding lawful transit through the Kerch Strait and the Sea of Azov.
In the Donbas, the United States encourages the sides to work towards an exchange of detainees before the upcoming holidays. A detainee exchange is a core piece of the Minsk agreements and imbues a modicum of humanity in the midst of conflict. Families of the detainees are waiting and hoping for the best. We encourage the sides to comply with this measure of the Minsk agreements to demonstrate that progress is possible.

Mr. Chairperson, the human rights situation in Russian-occupied Crimea is deplorable. The United States deplores the harassment and intimidation of Crimea-based lawyers involved in the defense of Ukrainian sailors illegally captured by Russia in the Kerch Strait on November 25. On December 9, an unknown assailant attempted to break into the offices of respected Crimean Tatar human rights lawyer and leader of the embattled Crimean Solidarity movement Emil Kurbedinov and his colleagues, smashing the windows with an iron pipe. Kurbedinov has bravely provided legal defense to dozens of victims of politically-motivated prosecutions in Crimea since the occupation began, including one of the illegally-captured Ukrainian sailors. Three days earlier, Kurbedinov had been arrested and sentenced to five days in jail on trumped up charges in retaliation for a 2013 social media posting – charges on which he had already been wrongfully convicted in January 2017. We demand Russia cease its campaign of intimidation against Crimean lawyers, activists, and those who oppose the occupation.

The United States fully supports Ukraine’s sovereignty, independence, and territorial integrity within its internationally recognized borders, extending to its territorial waters. We do not, nor will we ever, recognize Russia’s purported annexation of Crimea. We join our European and other partners in affirming that our Minsk-related sanctions against Russia will remain in place until Russia fully implements its Minsk commitments. The separate, Crimea-related sanctions will remain in place until Russia returns full control of the peninsula to Ukraine.