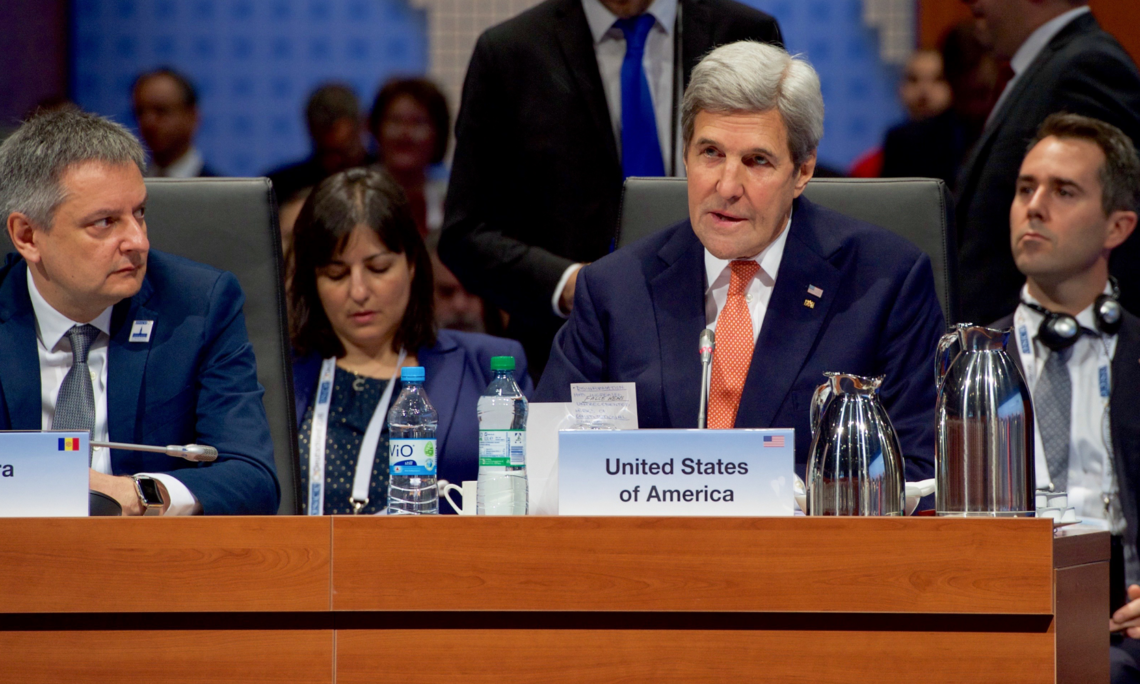 U.S. DEPARTMENT OF STATE
Office of the Spokesperson

SECRETARY KERRY:  Friends and colleagues, we meet in Hamburg today to reaffirm the same idea that tied us together in Helsinki 41 years ago: that our collective security is directly linked to the growth of our economies and the protection of basic human rights.

In our era as in the past, we advance the security and prosperity of our citizens when we advance the timeless principles that are at the heart of the OSCE – democratic governance and the rule of law; anti-corruption; respect for the sovereignty and territorial integrity of every state, no matter its size and power, and the dignity of every individual; and an unflinching stand against anti-Semitism, anti-Muslim, anti-Christian sentiment, and bigotry and intolerance of any kind.

These values literally can never be taken for granted.  They have to be defended constantly, and they have to be so in word and deed.  And that is exactly what we’ve done through the OSCE for four decades, and it is what we have to remain committed to achieving now and in the years to come.

Our task begins in actions where places of violence and assaults on human dignity persist, even where a clear path to peace is staring us in the face.

First and foremost, the conflict in the Donbas and the occupation of Crimea have gone on for too long, and at tremendous human cost on both sides of the line of contact. It is in the interests of all concerned to end the suffering and the stalemate, and that is why the United States continues to support France and Germany in their efforts as mediators within the Normandy format.  It’s why we strongly back the Trilateral Contact Group of the OSCE, Ukraine, and Russia.  It’s why we renew our call for full implementation of the Minsk agreements.  And it’s why we are so appreciative of everything done by the OSCE Special Monitoring Mission.

At the same time, we must not allow ongoing violence and occupation to obscure the longer-term challenge that Ukraine is tackling: the task of building a healthy democracy with institutions that deliver.  And the fight against corruption and for reform is what the people of Ukraine rightly recognize as the decisive battlefield.  That’s what they signed up for, and their determination to live in a democratic society governed by the rule of law demands our support.

The crisis in and around Ukraine is not the only one we face, obviously: protracted conflicts between Armenia and Azerbaijan, in Moldova and Georgia, still fester and undermine European security.  And in too many places, my friends, in the OSCE region, we have seen in recent days a rise of authoritarian thinking, accompanied by backsliding on human rights, on restrictions on independent media, a spike in acts of intolerance and hate crimes.

I met earlier this morning with a group of activists from throughout the OSCE states who are on the front lines of pushing back against this troubling shift away from democratic principles, away from openness, away from freedom.  And we all see what’s happening: growing corruption in too many countries; the increasing authoritarianism; moves by certain leaders to change constitutions in an effort to consolidate power; false news being spread through new platforms of the media; torture being actually advocated in certain quarters.  These developments are, simply put, a direct assault on the founding principles of the OSCE.  And let me be clear: bigotry, repression, and the silencing of dissent cannot become the new normal for any of us.  Every chip away at the fundamentals of freedom is actually a ugly building block in the road to tyranny.  And the fact is that we all need to be aware of the danger of authoritarian populism.

A free press, religious liberty, political openness, transparency in governance, a flourishing civil society – these are the signs of a confident and thriving nation.  And when people and institutions are denied these rights, the OSCE has an obligation to speak out.

That means following Germany’s lead in enhancing this organization’s ability to monitor and report on potential crises.  Clearly, there is an enormous amount on our agenda that remains, but it’s important to recognize that in a time of uncertainty, some things just don’t change.  Namely, our values, our belief in freedom and democracy, our respect for universal human dignity – these are the principles reflected in the Helsinki Final Act, in the UN Charter, in the Universal Declaration of Human Rights – all reaffirmed over the years in Copenhagen, Paris, Istanbul, Astana and, we hope, here in Hamburg.  And they are at the heart of democratic, successful societies, and they remain the best recipe for building the OSCE region that we seek, where we deliver peace and prosperity and security and liberty to our people.