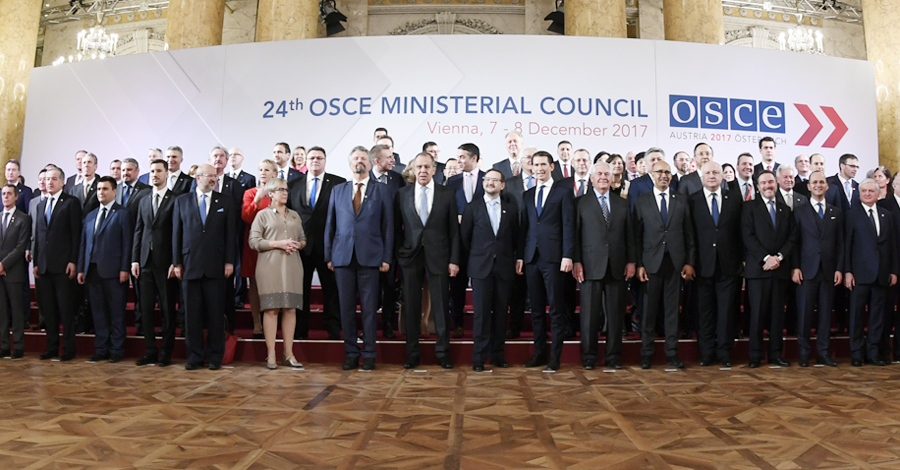 Thank you for the opportunity to address this body. The OSCE is an indispensable pillar of our common security architecture that bolsters peace and stability in Europe and Eurasia. Of all the challenges confronting the OSCE today, none is more important or vexing than the situation in Ukraine. The United States is committed to Ukraine’s sovereignty, independence, and territorial integrity within its internationally recognized borders. We call for full implementation of the Minsk agreements. We will never accept Russia’s occupation and attempted annexation of Crimea. Crimea-related sanctions will remain in place until Russia returns full control of the peninsula to Ukraine.

In eastern Ukraine, we join our European partners in maintaining sanctions until Russia withdraws its forces from the Donbass and meets its Minsk commitments. While Ukraine is taking steps to abide by these agreements – and it must continue to do so – Russia is not. More civilians were killed in 2017 than in 2016. In November, ceasefire violations in Donetsk and Luhansk were up 60 percent. We should be clear about the source of this violence: Russia is arming, leading, training, and fighting alongside anti-government forces. We call on Russia and its proxies to end its harassment, intimidation, and its attacks on the OSCE Special Monitoring Mission. We honor the sacrifice of Joseph Stone, an American paramedic killed in April while on patrol, and commend the bravery and commitment of the SMM monitors serving in the field today. We call on all the OSCE to implement and abide by the organization’s principles. We must respect the right of every state to choose its own political future. Where protection for human rights is weak, stability becomes even more difficult to maintain and democratic and economic progress is stalled, if not put under threat.

We face serious security challenges throughout Europe, from ongoing conflict to terrorism. At a time when existing arms-control agreements are being violated, we cannot seriously discuss new arrangements, but we must press for full implementation of existing agreements and seek to rebuild military transparency by updating and modernizing the Vienna Document. For decades, the OSCE has provided a venue where members can discuss security concerns on an equal footing. The Structured Dialogue launched earlier this year has yielded frank exchanges on the challenges that nations view as primary threats to peace and safety. We should all want the basic tenets of the Helsinki Final Act to be respected, and we all have an interest in reducing the risk of military miscalculation, the threats from terrorism and returning foreign terrorists, and threats from malicious cyberattacks.

The OSCE is an important platform to exchange views on these problems as well as global refugee and migration challenges. The security consequences of vast irregular flows of migrants are well-known to many of the countries here. The OSCE has a critical role to play in the exchange of best practices on migration management, strengthening partnerships with migrant-source countries, and combating organized crime organizations which profit from smuggling and human trafficking. The innocent have suffered the most.

We must make progress on ending the long-running conflict in Georgia and Moldova, as well as in Nagorno-Karabakh. We support the Minsk Group’s efforts to find a solution. We are pleased by commitments made by the presidents of Armenia and Azerbaijan at their October summit to intensify their negotiations and to reduce tensions along the line of conflict. Substantive progress can be made when there is a political will, and we welcome their decision yesterday to speed things up on both.

We welcome the recent 5+2 talks on Moldova. However, we must condemn Russia’s efforts to stifle access to Abkhazia and South Ossetia regions of Georgia.

And finally, in spite of some headway, instability remains in parts of the Balkans. Governments need to accelerate economic and political reforms, including strengthening institutions, implementing anti-corruption measures, and enforcing the rule of law. These are critical steps, especially an agreement on reform in Bosnia and Herzegovina, in advance of the elections in 2018.

Whether it is ending the crisis in Ukraine, fighting terrorism, promoting human rights, or resolving longstanding conflicts, the OSCE is an important platform for addressing these challenges. The United States will continue its strong support for the OSCE and will reject efforts to weaken any of its institutions or its field missions. We urge member nations to act on our recommendations today for a more peaceful, prosperous Europe, Eurasia, and Central Asia.