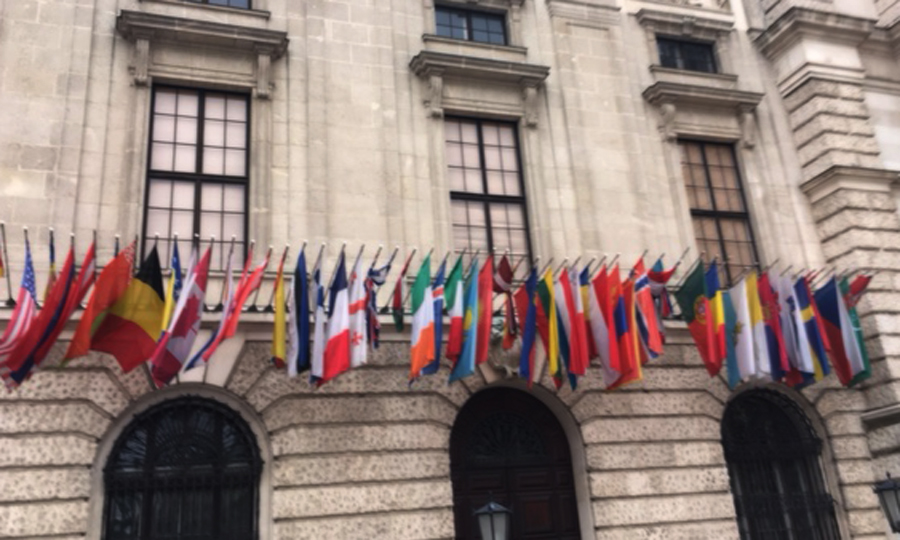 Thank you very much for this very constructive and useful discussion. We commend the Ukrainian Chairmanship for hosting this joint FSC-PC on hybrid warfare and thank our distinguished speakers who presented this morning forthrightly and directly. I note how central this issue is to the discussions at the OSCE. I noticed that my Russian colleague has departed this meeting. I would invite him to return to participate in the dialog that will now go on after the panel presentations. Dialog is the goal of the PC and the FSC.

Returning to the topic, hybrid activities are among the most immediate challenges to our security and to the integrity of our democratic institutions and are exactly the types of security challenges participating States are encountering in real time. The OSCE is an appropriate venue for discussion of these fundamental challenges – it just is.

We also thank the Spanish Chair of the Structured Dialogue for hosting a constructive informal working group with representatives from capitals last month, which included a session on hybrid. Many participating States have identified hybrid attacks as a major threat to their security, and several have called for institutionalizing the discussions of hybrid at the OSCE. Given its cross dimensional nature, this is an appropriate forum to continue these discussions.

Hybrid methods, by their very nature, leverage all instruments of national power – they occur both in armed conflict and below the threshold of armed conflict in increasing so-called “grey-zone” competition. The use of hybrid tactics is not new – the use of propaganda and disinformation is as old as conflict itself we have seen it throughout the 20th century and earlier. What is new is its emergence as a strategic threat in this “grey-zone,” a process amplified by technological advancements that we have seen in the 21st century that have changed the nature of modern strategic competition. Now the Trojan Horse has taken on an entirely new meaning. Military doctrine is evolving to adapt to this new strategic environment that blurs the line between conflict and competition – for example, cyber, as was discussed, is an emerging military domain alongside air, sea, land, and space.

Hybrid actions may manifest themselves in a cyber or physical battlefield, as in the well-known case of Russia’s aggression against Ukraine, a topic that my Russian colleague objects to discussing, where private military contractors (discussed earlier in the FSC under the Ukrainian Chairmanship), Russian proxy forces, and “little green men” attempted to mask Russia’s invasion and occupation of Crimea, a so-called Trojan Horse which later became quite obvious and apparent.

Hybrid attacks often blur the lines of the “battle space,” which may extend well beyond the military dimension to the human and economic dimensions as well. For instance, hybrid threats can take the shape of economic pressure, which is a topic within the OSCE’s second dimension, often not discussed, but it increasingly should be discussed. Hybrid threats also include cyberattacks on critical infrastructure, or electoral interference that goes to the core of our democratic processes, among its many manifestations. The central point I would make here is that the application of hybrid attacks constitutes conflict. It is aggression. The peoples of the OSCE region should not be in conflict with each other, but hybrid warfare is a policy of belligerence. I noticed our NATO presenter played this down a bit and said that hybrid is a tactic that we can address. Hybrid is a tactic, but it reflects a strategy, a strategy of aggression, and that has to be understood if we are going to make any progress towards peace in the OSCE region.

We’ve seen Russia employ hybrid tactics time and again. Its intelligence services support attempted coups and assassinations, and there was an assassination just last week within 15 kilometers of this room. They pay corrupt politicians to do Moscow’s bidding, spread false information on issues that affect public safety and health, and run campaigns that attempt to impact the outcome of elections. For instance, in October 2019, Russia carried out a widespread disruptive cyberattack against Georgia, which directly affected the Georgian population, disrupted operations of several thousand Georgian government and privately-run websites and interrupted the broadcast of at least two major television stations. We have called on Russia to cease this behavior because it is aggression.

It was particularly enlightening to hear examples at the June Structured Dialogue of how some actors, notably Russia and China, have exploited the COVID-19 pandemic as a vector for hybrid actions – most notably through disinformation. It is unconscionable that anyone would take advantage of the global crisis that has stricken millions and cost the lives of more than 500,000 men, women, and children to cast doubt on the effectiveness of democratic governance and institutions and deflect attention from their own aggressive, non-democratic behavior. You will recall the suggestion that a laboratory in the Republic of Georgia was actually the source of the COVID-19 pandemic, an assertion that I denounced at a previous meeting as weird. It is also disinformation and has a purpose. It is a tactic, and it is reflective of a strategy that should be concerning to the members of OSCE. As the United States noted during our Structured Dialogue intervention, now is the time to come together through a systematic and determined effort to navigate the pandemic’s multifaceted challenges. We need to unite against attempts by bad actors to divide us in this post-COVID recovery.

We heard the suggestion from some participating States that hybrid threats should be broken down into sub-components and relegated to corresponding OSCE forums, such as ODIHR, the Security Committee, FSC and the Cyber Working Group. While additional dialogue on hybrid activities in these forums is certainly welcome, they are no substitute for the wide-ranging strategic discussions we have had in the Structured Dialogue and now in the FSC-PC. These discussions have also fostered a constructive dialogue on how these activities impact the overall security environment in the OSCE area, and what this community should do to address those impacts. We should continue to explore the nature of hybrid actions and the steps the OSCE and individual participating States can take in response; that might set the stage for further discussions. Hybrid actors do not confine themselves to one “battlefield” — their tools are pervasive across the battlefield of ideas and levers of economic and political power.

More troubling was the argument from one participating State, Russia, which I would address directly, that the discussion of hybrid threats simply should not occur in the Structured Dialogue, or any other OSCE forum. It was difficult to follow the tortured logic for why a top security concern for so many participating States should not be discussed frankly and openly among us. That is precisely what the OSCE was created to do. We hear often about how the organization is supposed to be about dialogue. We heard it again today. Hybrid crosses over into kinetic war, and if we don’t have a dialogue or a discussion, and these tactics continue to mount, it may cross over into a kinetic conflict before states understand the dangers.

The hybrid discussion responds to Russia’s actions against neighbors and frankly beyond – including in some cases on the conventional battlefield – to undermine states’ freely chosen alliances and partnerships, disrupt democratic governance, fuel societal intolerance, impugn international support for independent civil society, and foment military insecurity.

Boycotting discussions on challenges that impact the stability and security of so many participating States, and indeed the most fundamental and cherished of our OSCE principles, subverts our common goal of cooperative security. Whether in this FSC-PC, the Structured Dialogue, or in any OSCE bodies, we must be prepared to address these challenges and discuss them openly and have a dialogue before it is too late.

We hope all participating States will come together to address and expose the pervasive challenge of hybrid threats openly and with a mind towards rebuilding transparency, trust, and stability in the Euro-Atlantic area.