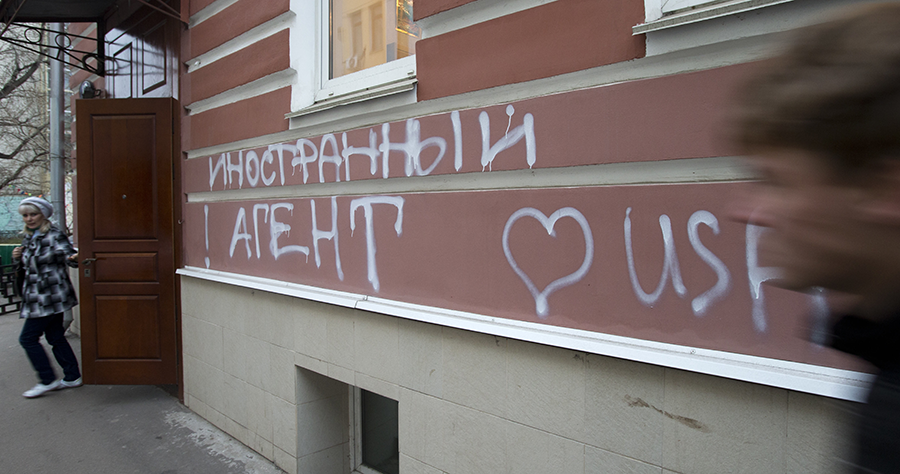 A man passes by the office of Memorial rights group in Moscow, Russia in 2012. The building has the words “Foreign Agent (Loves) USA” spray-painted on its facade. (AP)

The United States remains deeply troubled by the Russian government’s growing intolerance of all forms of dissent and independent expression. We call upon the Russian government to bring to justice those responsible for ordering, planning, and executing the vicious murders of journalist Anna Politkovskaya and democratic opposition member Boris Nemtsov. Ongoing impunity for these and other unsolved murders of activists and journalists continues to undermine freedom of expression and respect for justice and human rights in Russia.

Ms. Politkovskaya was brutally murdered ten years ago last week. Her courage and persistence in shedding light on the horrors of the conflict in Chechnya remain an inspiration to us all. Like many other journalists reporting on the North Caucasus over the past two decades, Ms. Politkovskaya was killed in retaliation for her efforts to uncover corruption, abuse, and violations of human rights.

We note the opening of the trial on October 3 in the Moscow District Military Court against five Chechens accused of the February 2015 murder of Boris Nemtsov, who dedicated his life to working for a more democratic and prosperous Russia. He was murdered for expressing opinions contrary to those of the Kremlin. We are deeply concerned about the Russian government’s failure to investigate and question Chechen leader Ramzan Kadyrov regarding his ties to the defendants. We call on Russian authorities to try the defendants in this case fairly and justly, and to ensure that all those responsible for this murder, especially those who ordered it, are brought to justice. We join Mr. Nemtsov’s daughter, Zhanna Nemtsova, in urging Russian authorities to continue the investigation into other individuals suspected of playing a role in organizing and perpetrating this crime.

In closing, we renew our call on the Russian government to publicly condemn any attacks or threats of violence against members of the political opposition, civil society activists, or journalists, and to protect them from further harm. We remind Russia of its international obligations and OSCE commitments to protect and promote the human rights and fundamental freedoms of everyone, regardless of political affiliation or personal views.