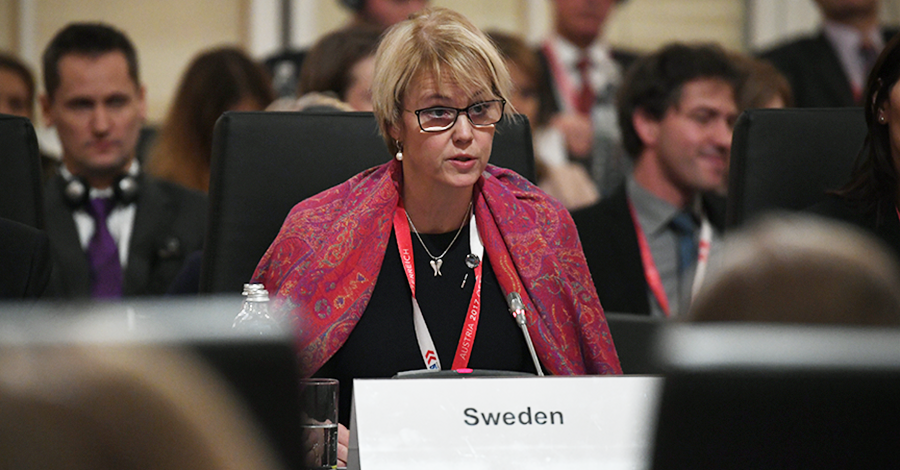 This statement is delivered on behalf of Canada, Estonia, Latvia, Lithuania, Poland, Romania, Sweden, Czech Republic, the United Kingdom, and the United States of America.

We express our full support to the strong determination of Georgia, in its aspirations of European and Euro-Atlantic integration and commend the commitment shown by the Georgian authorities in this regard.

We welcome the progress made by Georgia in further consolidating its democracy, improving transparency of its institutions, upholding human rights and fostering economic development, thereby setting a very positive example.

We congratulate the government and people of Georgia on well-administered Local Elections of 2017 conducted in respect with fundamental freedoms and international commitments. We note the preliminary findings and conclusions of the OSCE/ODIHR Election Observation Mission and expect the government to implement its recommendations to further improve the election environment in the country.

We remain concerned over the continued occupation of the territories of Georgia and underline the need for the peaceful resolution of the conflict, based on full respect of the UN Charter, the Helsinki Final Act, and the fundamental norms and principles of international law.

We call upon the Russian Federation to fully implement the EU-mediated 12 August 2008 Ceasefire Agreement, inter alia to withdraw its military forces from the occupied territories of Georgia.

We urge the Russian Federation to reverse its recognition of Georgia’s regions as independent states.

We support the Geneva International Discussions as an important format to address the consequences of the August 2008 war, and underline the need for progress on the core issues of the discussions, including the non-use of force, establishing international security arrangements in the Georgian regions Abkhazia and South Ossetia aimed at providing security and stability on the ground, and ensuring the safe and dignified return of IDPs and refugees.

We welcome the efficient work and contributions of the EU Monitoring Mission in preventing the escalation of tensions on the ground and call upon the Russian Federation to grant the EUMM an access to the Georgian regions Abkhazia and South Ossetia. We support the Incident Prevention and Response Mechanisms (IPRMs) in Gali and Ergneti and encourage the participants to find proper solutions for the safety and humanitarian needs of the conflict-affected population.

We express our deep concern over the increase of Russian military exercises and further build-up to the Georgian regions Abkhazia and South Ossetia by the Russian Federation. We condemn the gross violations of rights related to freedom of movement, residence, property, as well as right to education in one’s native language and underline that the so called borderization through placement of artificial obstacles and fortifying the occupation line with barbed and razor wire fences further aggravates the humanitarian situation on the ground.

Of particular concern is the intensified ethnic discrimination in the Georgian regions Abkhazia and South Ossetia. We express our concern for recent mass demolition of houses of Georgian IDPs in Eredvi village, South Ossetia, Georgia, under the Russian Investment program that is an illustration of purposeful policy to completely erase the traces of ethnic Georgian population from the occupied territories.

We support the fundamental right of IDPs and refugees to return to the places of their origin in safety and dignity.

We call upon the Russian Federation to enable access by international human rights monitoring mechanisms to the occupied territories of Georgia.

We welcome Georgia’s constructive policy aimed at de-escalation of tensions with Russia including unilateral steps such as the pledge of non-use of force in restoring its territorial integrity, its constructive participation in the Geneva International Discussions, as well as its efforts to engage with the population residing in the occupied regions and support concrete projects in healthcare, education and environmental fields that are being implemented to this end.

We encourage the OSCE’s engagement in the process of finding a peaceful resolution to the conflict in Georgia and support the implementation of confidence – building measures with an aim to rebuilding trust and improving the living conditions of the conflict-affected communities.

We also encourage OSCE participating States to agree on reopening an OSCE cross-dimensional mission in Georgia, in particular for the benefit of the civilian population, including a monitoring capacity able to operate unhindered across the occupation line. The mission will considerably strengthen the OSCE’s engagement in the Geneva International Discussions and Incident Prevention and Response Mechanisms, as well as in implementation of CBMs.

The Friends look forward to working with OSCE and Georgian authorities to develop supportive humanitarian, educational, medical, environmental and other outreach opportunities to increase contacts. The friends will continue to raise awareness of the conflict in Georgia and need for its peaceful resolution.