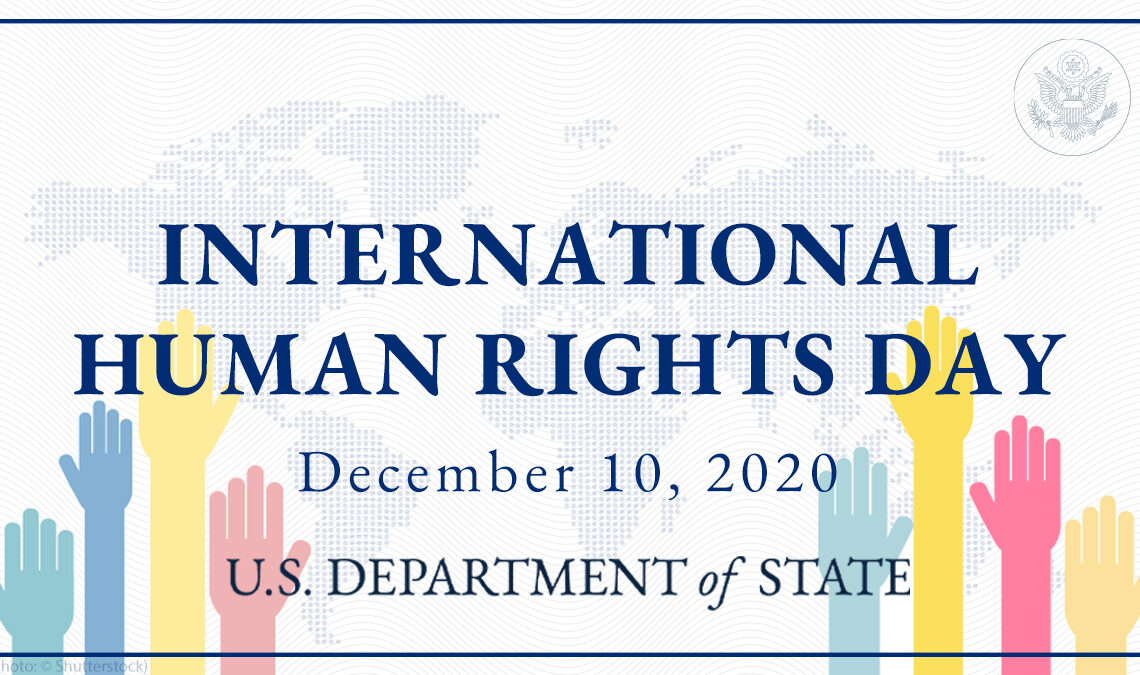 December 10, is International Human Rights Day, marking the adoption of the UN Universal Declaration of Human Rights in 1948

Yesterday, December 10, was International Human Rights Day, marking the adoption of the UN Universal Declaration of Human Rights in 1948.  Many of the human rights and fundamental freedoms set forth in that pathbreaking document were later enshrined in our own Helsinki Final Act that established the OSCE.

Mr. Chairman, it is remarkable to me that this topic was raised by the Russian Federation.  I have listened very closely to the statement of my Russian colleague here today, as I do to every statement and every word that their country puts forward at the Permanent Council.  I would suggest that the statement of my Russian colleague should be printed and studied because it would appear to be the statement of the Russian Federation redefining and defining their attitude toward human rights, which is now an ongoing discussion here at the OSCE and I believe will continue to be discussed in the coming year.

The United States stands for the proposition of national sovereignty very strongly as a matter of fact and we listened to the Russian statement which suggested that human rights issues should not be a vehicle for intervention into countries’ individual sovereignty.  The United States stands for sovereignty, but that is a remarkable statement that I think was important for this presentation today, that should not be lost in the welter of the many discussions that are going on here today.

The fact is that virtually every nation of the world has subscribed to the Universal Declaration of Human Rights of the United Nations, including the OSCE participating States.  That is a fact and it is a universal declaration.  In addition to that, as I have previously stated, here at the OSCE the participating States have adopted similar concepts with the Astana Commemorative Declaration, which is often cited by my Russian colleagues, but I want to remind you that the Astana Declaration talked about the universality of human rights: “We reaffirm categorically and irrevocably that the commitments undertaken in the field of the human dimension are matters of direct and legitimate concern to all participating States and do not belong exclusively to the internal affairs of the State concerned.”  It is important to remember these things as we begin the process of having this discussion in this particular year.

Soviet dissidents, including the early Helsinki monitors, started an International Human Rights Day tradition of gathering in Moscow’s Pushkin Square to show solidarity with prisoners of conscience in the USSR, among them their own courageous colleagues.  So it is appropriate I speak about those in our region imprisoned today for—and I quote Helsinki Principle Seven—“know[ing] and act[ing] upon [their] rights.”

As Deputy Secretary Biegun grimly observed in his Ministerial intervention last week, the number of political prisoners in the OSCE region continues to rise.

The Russian human rights group Memorial recognizes 358 political prisoners held by Russia, including 295 imprisoned for their religious beliefs and dozens of Ukrainians.

Since October, Belarus has imprisoned over a hundred persons on politically-motivated charges, and every day hundreds more are detained and suffer brutal treatment, and are reportedly tortured, for demanding free and fair elections and a democratic future for their country.  Only a week ago, our Ministers solemnly adopted a decision to eradicate torture in this region.  That was a landmark decision by that Ministerial.  It’s time now to put those words into action.

According to NGOs, Azerbaijan holds more than a hundred political prisoners and allegations of torture during interrogations persist.  Last week, Azerbaijan joined consensus on ending torture in the OSCE region.

In Central Asia, Kazakhstan, Tajikistan, and Turkmenistan imprison, and, reportedly in some cases, torture opposition activists.  We urge those governments to put this Ministerial decision against torture into practice.

Journalist Abdulmumin Gadzhiyev in Russia, who faces up to 20 years on terrorism-related charges that human rights defenders deem baseless.  I have repeatedly raised the case of historian Yuri Dmitriyev, imprisoned in retaliation for his work researching Stalin-era crimes.

In Russia-occupied Crimea, the leader of the peaceful NGO Crimean Solidarity, Server Mustafayev, is serving a 17-year sentence on terrorism charges.  Dozens of his fellow Crimean Tatars are imprisoned, including human rights defender Emir-Husain Kuku and journalist Remzi Bekirov.

In Turkey, philanthropist Osman Kavala remains behind bars despite European Court of Human Rights rulings calling for his release.

In Belarus, two members of the Presidium of the Coordination Council, Mariya Kalesnikava and Maksim Znak, are imprisoned for demanding democracy.  These valiant heroes and all others unjustly held by Belarusian authorities must be released immediately!

Authorities in Azerbaijan incarcerate journalists such as Afghan Sadigov and Elchin Ismayilli, as well as political and religious opposition figures.

Authorities in Tajikistan imprisoned human rights lawyer Buzurgmehr Yorov for 23 years on spurious charges of fraud and attempting to “change the constitutional system by violence.”  These charges are widely-viewed as retaliation for his allegations that one of his clients, a member of the banned Islamic Renaissance Party of Tajikistan, had been tortured.  Our words against torture must be matched by deeds if the Ministerial meetings, if the Permanent Council, if this organization is to believe itself what it says at its most important meetings.

In Turkmenistan, human rights activist Gulgeldy Annaniyazov was sentenced in 2008 to 11 years in prison, but was not released after completing his sentence.  In 2012, human rights activist Mansur Mingelov was convicted on spurious charges and sentenced to 22 years in prison.  The NGO “Prove They Are Alive” identifies 121 individuals, including political prisoners, who disappeared into the prison system, never to be heard from again.  One of these is Batyr Berdiev, our former permanent representative colleague right here at the OSCE.  We should leave a chair empty at this table for him, lest we forget.  Let us remember that, when we once again meet together, of the empty chair of Batyr Berdiev, who has disappeared.

The torture text can be a turning point for the OSCE.  The OSCE can turn away from the sad and cruel history of the centuries passed and into the light of a new century.

In commemoration of International Human Rights Day, I call for the immediate release of all political prisoners in the OSCE region.