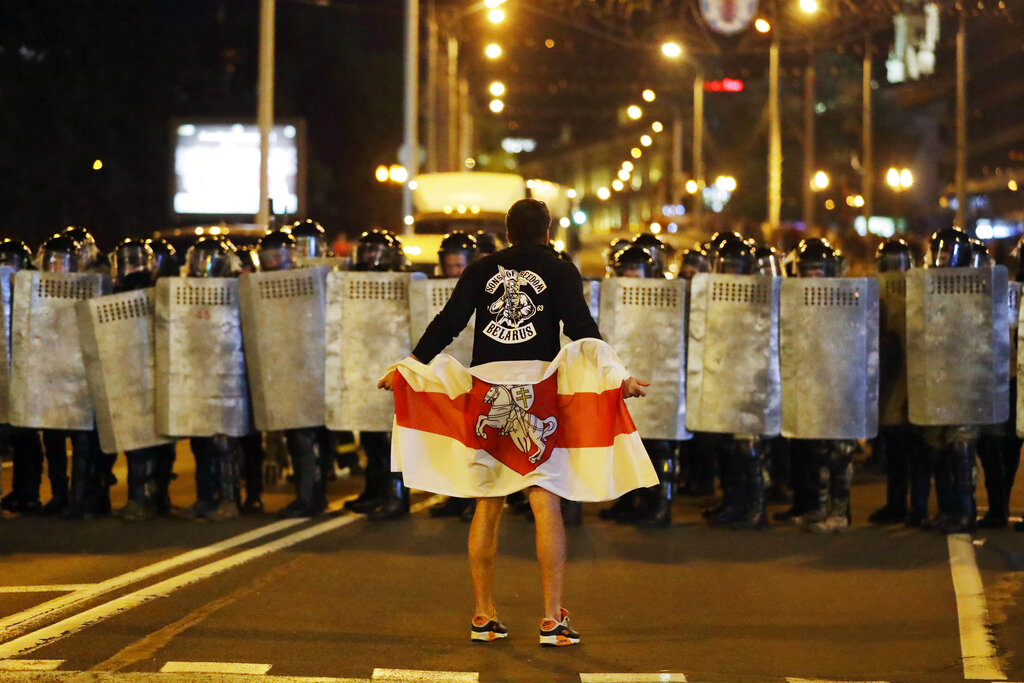 A protester holding an historical Belarusian flag stands in front of police officers as they block a road after the Belarusian presidential election in Minsk, Belarus. (AP Photo, File)

The United States recognizes the timeliness of the Belarusian delegation raising the upcoming constitutional referendum in Belarus.

Let me make plain, however, the international community holds no illusions that the constitutional referendum can resolve the political crisis resulting from the 2020 fraudulent presidential election. Virtually all independent voices are being silenced, over 1,000 political prisoners remain behind bars, civil society organizations and independent media continue to be forcibly closed under alleged “extremism” charges, and tens of thousands of Belarusian citizens have been driven into exile. In light of that reality, it is not possible to regard a hastily proposed set of revisions to the constitution as a serious effort at much needed democratic progress and reform.

The United States has long urged the Belarusian authorities to address the legitimate concerns of the Belarusian people. This constitutional reform process has failed to include their voices. Due to the ongoing crackdown, independent human rights organizations under constant risk of severe reprisal will be largely unable to organize observation of the referendum. Moreover, we are concerned about the lack of genuine public consultation and discussion on key elements of the revisions, including term limits for the presidency to be enacted only after Mr. Lukashenka leaves office, and a proposed change to Belarus’s non-nuclear status and political neutrality.

We call on the Belarusian authorities to unconditionally and without delay release all political prisoners and to end their campaign of repression. We further call on the Belarusian authorities to implement the recommendations of the independent expert mission under the Moscow Mechanism and take meaningful action to address the concerns raised under the Vienna Mechanism. Belarusian authorities should promptly enter into a facilitated, comprehensive, and genuine national dialogue with the democratic opposition and civil society, leading to new free and fair presidential elections under international observation, and taking into account ODIHR recommendations.

These steps will set Belarus on the path to resolving the political crisis and respond to the democratic aspirations of the Belarusian people. A non-transparent referendum is neither a viable – nor a credible – path forward for Belarus.