Home Home | News & Events | Statement on the 20th Anniversary of UNSCR 1325 on “Women, Peace and Security” 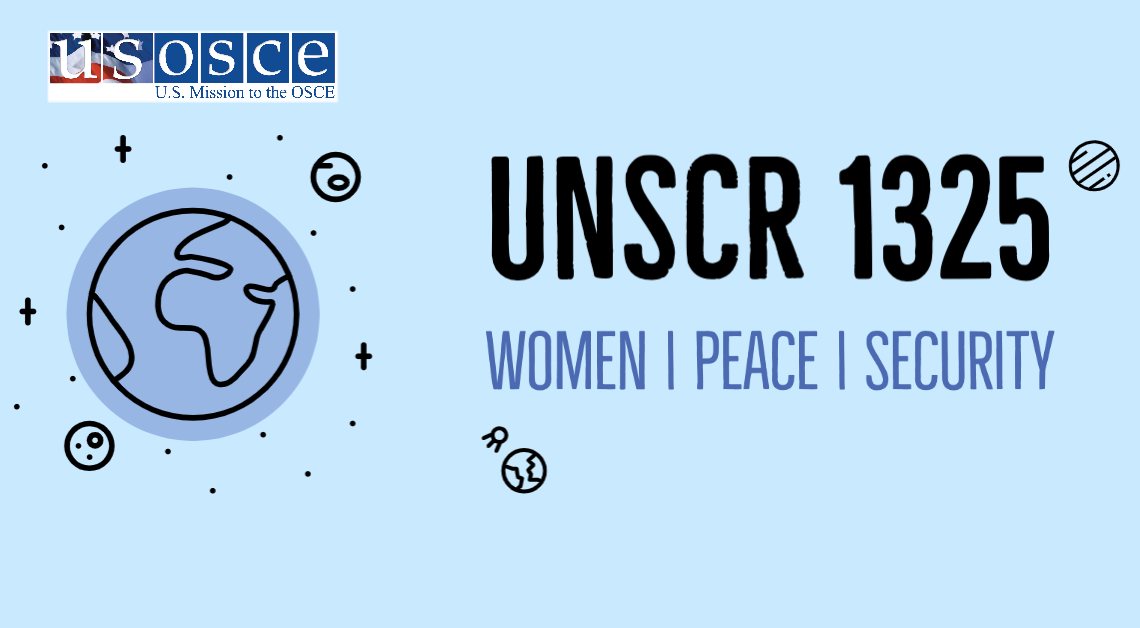 Statement on the 20th Anniversary of UNSCR 1325 on “Women, Peace and Security”

The United States welcomes the Albanian Chairmanship’s focus on Women, Peace and Security at the OSCE, and we thank Ambassador Verveer for her remarks to the Permanent Council here today.  I want to take particular note of and express our great appreciation for Albania’s leadership in standing with us and many other OSCE members in recent efforts to highlight one of the gravest threats to women’s human rights and security in the world today: the atrocities currently underway against the Uyghurs and other ethnic and religious minorities in China.

We have seen a growing number of countries join in condemning the Chinese Communist Party’s program of forced population control, which combined with mass detention, Orwellian surveillance, and other abuses in Xinjiang have been devastating for Uyghur women in particular.  As a member of both the OSCE and the Organization of Islamic Cooperation, Albania’s decision to stand up for the human rights of the Uyghur people is especially noteworthy.

Albania’s leadership in this context also points out a critical lesson from the OSCE’s history: when we stand together in defense of our values, there is nothing we cannot overcome.

This year, the 20th anniversary of the milestone UN Security Council Resolution 1325 on “Women, Peace, and Security,” is a time for celebration and an opportunity for reflection.  With the adoption of this resolution, the UN Security Council acknowledged for the first time that efforts to build and maintain peace and security are more sustainable when women meaningfully participate and have influence in political and security decision-making processes, and when women and girls are safe from violence, in conflict and crises.  This resolution set the groundwork for a series of nine additional resolutions on enhancing the roles, perspectives, and needs of women and women and girls in conflict and crises, and that addressing conflict-related sexual violence is a matter of international peace and security.

The United States continues to be a global leader on Women, Peace and Security issues.  That is why I am pleased to announce today that the United States has pledged over $1.2 million to Women, Peace and Security activities under the Extra-budgetary, or ‘ExB’, project WIN: For Women and Men – Strengthening Comprehensive Security Through Innovation and Networking.  Gender equality is not only an American priority, it is a global imperative if we want to achieve sustainable peace, and we encourage other delegations to contribute to this same extrabudgetary worthy project also.

The United States became the first country in the world to pass comprehensive national legislation to enshrine this agenda with the Women, Peace and Security Act of 2017, which codified our commitment to advancing women’s meaningful participation, and the safety of women and girls.  In June 2019, the Trump administration released the U.S. Strategy on Women, Peace and Security.  This strategy’s “whole-of-government” approach is rooted in the core tenants of the National Security Strategy of the United States, which recognizes women as agents of positive and durable change in preventing and resolving conflicts, countering terrorism and violent extremism, and establishing post-conflict peace and stability.

Furthermore, in June 2019, the Departments of State, Defense, and Homeland Security, and the United States Agency for International Development, released corresponding Women, Peace and Security Implementation Plans, giving us a powerful set of new tools to advance this critical agenda.

UN Security Council Resolution 1325 also set the stage for the OSCE, as the world’s largest security organization, to empower women, particularly in the peace and security efforts.  The Ministerial Council recognized this and adopted the Gender Action Plan in 2004, tasking participating States with promoting the role of women in conflict prevention and peace processes and advancing gender equality more broadly given that OSCE is a Chapter VIII regional organization under the UN Charter.

Indeed, delegations at the OSCE have taken a range of efforts to improve gender equality.  Informal arrangements among representatives of some participating States such as Women in the First Dimension, Men Engage, and the Network of Female Ambassadors are laudable initiatives demonstrating our resolve to improve the participation of women in peace and security efforts.  We welcome the efforts of Women in the First Dimension to ensure equal representation in the work of the Forum for Security Cooperation and launch a mentoring network for female professionals in the security dimension.

The OSCE is most effective when it is guided by the example and political will of the participating States.  It is incumbent upon each of our countries to promote women’s meaningful participation in peace and security fields at home and in our various bilateral and multilateral relationships.  As part of our efforts to promote gender equality, it is critical to enhance our efforts to prevent and respond to gender-based violence as a threat to maintaining peace, and preventing and recovering from conflict.  Finally, equal access to gender-sensitive relief and recovery efforts are critical.  We look forward to next week’s third Tri-Annual Gender Equality Review Conference and call on participating States to reflect on their achievements and gaps to maintain accountability on our respective commitments.

The recent OSCE study on implementing the Women, Peace and Security agenda reports that 60 percent of participating States have national action plans.

While that is certainly welcome progress, this means that twenty years after the adoption of UN Security Council Resolution 1325, 40 percent of the participating States still have important work to do to set national strategies and priorities to advance this agenda.  We stand ready to partner with our fellow OSCE participating States in developing effective and measurable national action plans and are eager to share our own lessons learned.

In closing, I challenge all participating States to redouble their efforts to attain gender equality, including prevention and response to violence against women and girls, and women’s meaningful participation in all aspects of our peace and security agenda.