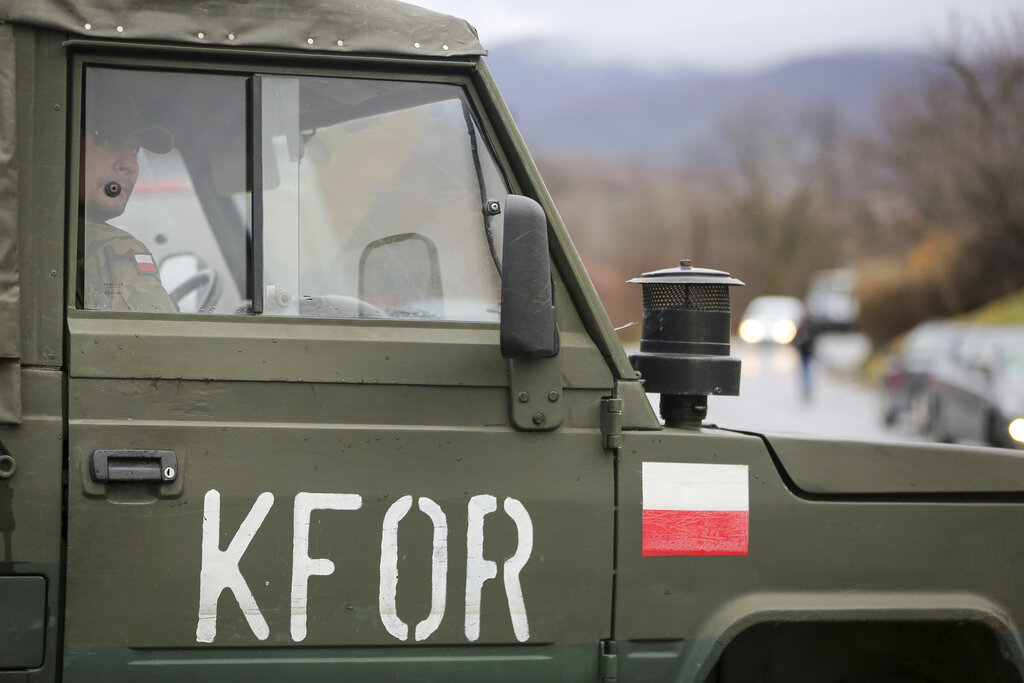 Polish soldiers, part of NATO peacekeeping mission in Kosovo (KFOR), are parked by the side of a road blocked with heavy vehicles in the village of Rudare, northern Kosovo. (AP Photo/Visar Kryeziu)

Statement on the Recent Developments in the North of Kosovo

As delivered by Ambassador Michael Carpenter
to the Permanent Council, Vienna
December 15, 2022

The United States expresses its deep concern about the current situation in the north of Kosovo.  We understand that Kosovan authorities have detained an individual suspected of involvement in a violent attack on Kosovan law enforcement and electoral commission authorities.  This arrest is being used as justification for roadblocks as well as threats and intimidation against the Kosovan authorities and the local population.

Those who erected roadblocks should dismantle them immediately.  We expect an end to all threats of violence and intimidation.  We express our appreciation and full support to NATO’s Kosovo Force (KFOR) for its efforts to ensure security and freedom of movement throughout the country, including to and from the European Union Rule of Law Mission (EULEX).  We firmly condemn as unacceptable all attacks on Kosovan and international security agencies.

We call on everyone to exercise maximum restraint, take immediate action to achieve de-escalation, and refrain from provocative acts.  We urge the parties to work within the EU-facilitated Dialogue to resolve issues of concern.

We also welcome the decision by the Kosovan government and the political party leaders to postpone the municipal and mayoral elections in the four northern municipalities.  This constructive decision advances efforts to promote a more secure environment in the north, which is key for achieving a comprehensive agreement on normalized relations between Kosovo and Serbia.

The two countries should concentrate fully and urgently on normalizing relations through the EU-facilitated Dialogue.  Both Kosovo and Serbia should implement past Dialogue agreements.

We thank the OSCE Mission to Kosovo for its timely and detailed reporting to delegations about the situation and rely on it for continued updates.

We remain of the strong belief that it is unfortunate that Kosovo is not a member of this body and therefore remains unable to speak for itself.  We look forward to the day when that can happen.