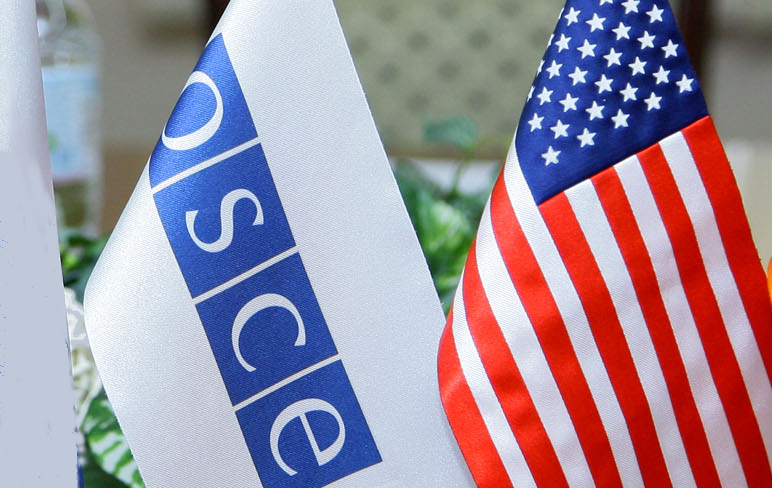 Statement regarding the Conflict In and Around Nagorno-Karabakh

We too would like to take this opportunity to express our condolences to the people of France and those who were affected by today’s tragic terrorist attack in Nice. I wish to inform the Permanent Council of the joint statement that was released by the governments of the United States of America, the Republic of Armenia, and the Republic of Azerbaijan on October 25, 2020.

“Armenia’s Foreign Minister   and Azerbaijan’s Foreign Minister met with the Deputy Secretary of State   on October 24, 2020 and reaffirmed their countries’ commitment to implement and abide by the humanitarian ceasefire agreed in Moscow on October 10, which was reaffirmed in the statement issued from Paris on October 17, in accordance with the October 1, 2020 joint statement of United States President Donald J. Trump, French President Emmanuel Macron, and Russian President Vladimir Putin.  The humanitarian ceasefire took effect at 08:00 local time (on October 26, 2020). The United States facilitated intensive negotiations among the Foreign Ministers and the Minsk Group Co-Chairs to move Armenia and Azerbaijan closer to a peaceful resolution of the Nagorno-Karabakh conflict. ”

Mr. Chair, the United States is deeply disappointed that the sides have failed to adhere to the ceasefire.  There is no military solution to this conflict.  We urge the sides to abide by their commitments to cease the violence and pursue a diplomatic solution to the conflict under the auspices of the OSCE Minsk Group Co-Chairs.

We urge the Foreign Ministers of Armenia and Azerbaijan to reach agreement on access to and the exchange of detainees and remains during their talks with the International Committee of the Red Cross and with the support of the Personal Representative of the OSCE Chairperson-in-Office.  We call on the sides to observe fully their obligations under international humanitarian law, including their obligations related to protection of civilians and civilian objects.

We call on external parties not to contribute to the ongoing violence, but instead to use their influence to urge both sides to adhere to the humanitarian ceasefire and to return to substantive negotiations under the auspices of the Minsk Group Co-Chairs.

Mr. Chair, this conflict cannot be resolved through military means.  The only solution is a negotiated settlement based on the basic principles well known by both sides.  We urge Armenia and Azerbaijan to cease inflammatory rhetoric, to abide by the humanitarian ceasefire they committed to in Moscow, Paris, and Washington, and to conclude substantive negotiations to end this conflict and its tragic toll on human lives.