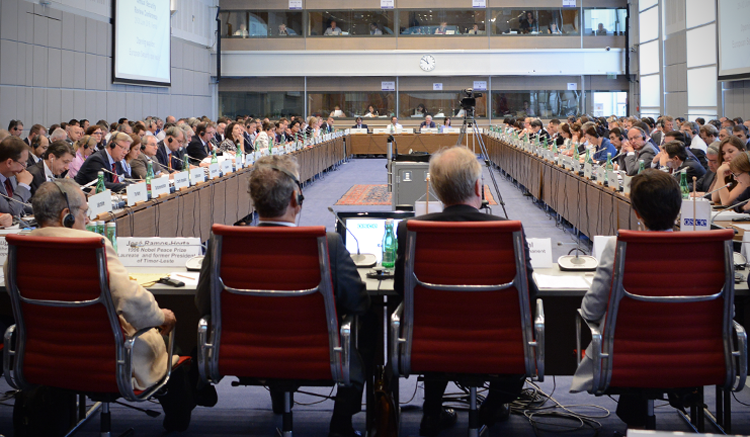 We too welcome this session on the protracted conflicts in the OSCE region. The conflicts in the South Caucasus and Moldova continue to stunt human potential and damage lives, and we’ve talked about this a little already. The fact that these conflicts persist, unresolved, is a stain on our record as a community of nations.

Earlier today, the United States condemned the ongoing violation of Ukraine’s sovereignty and territorial integrity and encouraged Russia to take the steps necessary to deescalate that crisis in support of full implementation of the Minsk Agreements. We also urged respect for the foundations of European security institutions – international obligations and political commitments, such as those in the Helsinki Final Act and the UN Charter. When rules are broken, the answer is not to create new institutions, but rather to hold participating states accountable for their actions.

This is particularly true in the context of the Georgia, Moldova, and Nagorno-Karabakh conflicts. The OSCE has a duty to shine a light on the situation on the ground and use our resources and political capital to find paths ahead.

There are some clear steps that we could take in all three conflicts that would represent progress, in addition to our continued support for the 5+2 Talks, the Geneva International Discussions, and the OSCE Minsk Group.

In Moldova, we welcome the resumption of formal 5+2 talks on the Transnistrian Settlement process, an important step toward ‎building confidence on both sides. In additional to fulfilling tasks agreed at the 5+2 meeting, the sides and the international community should support improved access to the Transnistrian region by the OSCE Mission to Moldova. Looking ahead, we support sharing information on military forces to further demilitarize the conflict, and eliminating checkpoints and other barriers to free movement of goods and people. This organization should also consider practical steps to improve economic and trade connections, as well as people-to-people contacts on the ground.

In Georgia, increasing access by the international community to the Abkhazia and South Ossetia regions is critical. The current situation – where the EU monitoring mission does not have access to the regions – is unacceptable and inconsistent with the 2008 cease-fire agreement. Just as worrisome is the so-called “borderization” effort that has been ongoing along the administrative boundary lines. The United States supports an enhanced OSCE role in Georgia, which would allow the international community to do more on the ground to address humanitarian and security concerns. We welcome the agreement in the Geneva Discussion to re-start the Gali IPRM, an important step toward ‎restoring dialogue in the region and defusing tensions along the Abkhazia ABL.

As one of three co-chair countries of the Minsk Group, the United States remains committed at the highest levels to mediating a lasting settlement to the Nagorno-Karabakh conflict.  The outbreak of violence along the Line of Contact in April testifies to the clear and immediate risk posed by the persistence of the protracted conflicts in the OSCE region. This conflict will not be resolved by military means. We hope that the leaders of Armenia and Azerbaijan will continue to work with the Minsk Group Co-Chairs on implementing the outcomes of the May 16 meeting in Vienna and the June 20 meeting in St Petersburg. We call on the sides to fulfill their Summit-level commitments to expand the OSCE monitoring mission in the conflict zone, finalize a proposal to establish an OSCE investigative mechanism, and advance negotiations on a comprehensive settlement.

The United States will continue to work with other participating States leading up to the Hamburg Ministerial in December, when we hope Ministers will be able to point to concrete results of this Organization’s efforts on the protracted conflicts in 2016.

As delivered by Deputy Assistant Secretary for European Affairs Kathleen A. Kavalec at Working Session 1 of the 2016 OSCE Annual Security Review Conference