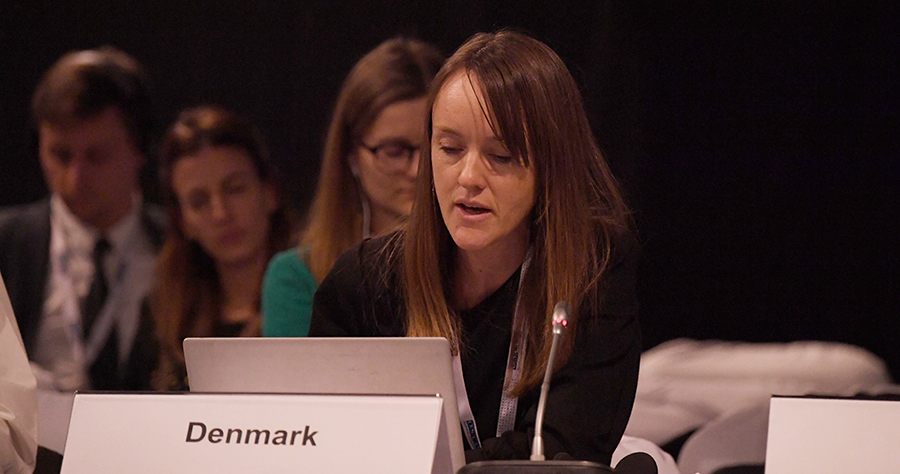 The Deputy Head of Mission of the Permanent Representation of Denmark to the OSCE, Fenja Yamaguchi-Fasting, delivers the joint statement on Human Rights and Fundamental Freedoms at the 26th OSCE Ministerial Council Closing Plenary Session, 2019

Delivered by the Danish Delegation to the OSCE on behalf of the delegations of Belgium, Canada, Denmark, Estonia, Finland, France, Germany, Iceland, Ireland, Latvia, Lithuania, the Netherlands, Norway, Sweden, the United Kingdom, and the United States.

The annotated agenda of the SHDM reminds that “participating States have committed to address intolerant discourse and hate crime while respecting human rights and fundamental freedoms.” Regrettably, individuals in the OSCE area are being subjected to discrimination, and denied access to justice. It is crucial to ensure that the rule of law is respected. No one should face harassment and persecution, arbitrary or unlawful arrests or detentions; torture, enforced disappearances; and extrajudicial executions based on any grounds, including on their perceived or actual sexual orientation or gender identity.

In November 2018, 16 OSCE participating States invoked the OSCE Moscow Mechanism to look into credible allegations of serious human rights violations and abuses in Chechnya allegedly committed during January 2017 to November 2018 against LGBTI persons, human rights defenders, members of the independent media, lawyers and others.

Despite the strong calls from international human rights organizations, local human rights defenders, civil society organizations and the international community as a whole, the climate of impunity described in the Moscow Mechanism Report clearly continues to prevail, with new reported attacks against LGBTI persons, human rights defenders and journalists. Seventeen months have passed since this report was issued. However, there has been no constructive response to the Report or its recommendations from the Russian federal authorities.

The situation in Chechnya remains deeply worrying. We again strongly call on Russia to fully implement the recommendations contained in the Moscow Mechanism Report.

We will continue to raise our concerns with regard to the numerous credible allegations of ongoing serious human rights violations and abuses in Chechnya until we receive a substantive response from the Russian Federation and observe tangible progress in the region.