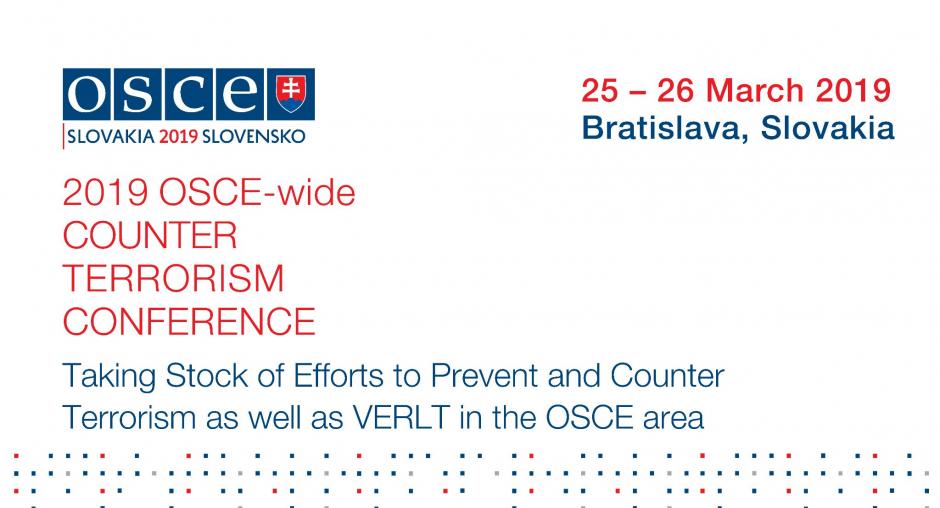 As prepared for delivery by the Deputy Coordinator for Countering Violent Extremism Chris Harnisch
at the 2019 OSCE-wide Counter-Terrorism Conference
Bratislava, March 25, 2019

Good morning, and thank you for the opportunity to address you all today.

I wanted to express our sympathies to the victims of the horrific terrorist attack that took place last week in Christchurch, New Zealand.  It further reminds us that terrorism knows no bounds, holds no one ideology, and that no part of the world is immune from its unacceptable expression of hate. I would like to echo the sentiments expressed by Ambassador Bekker that it is critical that political leaders, and we as government officials and civil society leaders, not use this attack or any attack to advance political agendas, as doing so will only engender more hatred, fear and violence.

Let me take a moment to commend the Slovak Republic Chairmanship’s decision to focus this conference on taking stock of our progress in the fight against terrorism and discussing best practices and where we can work together more effectively to address the terrorist threat we all face.

From this time last year, we have made incredible strides in the fight against ISIS.  Thanks to the sacrifices of Coalition members and partners, we’ve liberated nearly 110,000 square kilometers of territory and freed approximately 7.7 million men, women, and children from ISIS’s barbaric rule.  And just two days ago, the Coalition, alongside our Syrian Democratic Forces partners, announced that ISIS’s territorial caliphate has been completely defeated in Syria.

These achievements mark great progress in our fight against terrorism, but we must remain vigilant and we must together continue to fight terrorism in all of its forms wherever it exists.  I would like to address three fundamental truths regarding the state of terrorism today.

First, even as we defeat them on the battlefield, ISIS has shown a dangerous ability to adapt. The group’s leaders and foot soldiers see the destruction of their so-called physical caliphate as a setback, not a defeat.

Second, ISIS has a truly global presence. It has affiliates and networks in the Middle East, throughout Africa, and in South Asia. The group is also present here in Europe, and they’ve recruited from and inspired attacks in North America as well.  ISIS is actively exfiltrating fighters to these branches or other safe havens to continue the fight. Battle-hardened terrorists are heading home from the war zones to wreak havoc. And homegrown terrorists who’ve never set foot on a battlefield, but have been inspired by ISIS, are planning and executing attacks.

The third fundamental truth is that ISIS is by no means the only terrorist group that poses a threat to international security.  At least 120 other organized terrorist groups are coordinating and conducting attacks around the world, including a resurgent al Qaeda that we must continue to pursue.  Other terrorists that pose a threat to international security, and have attempted multiple attacks here in Europe, are backed by the Iranian regime, which continues to use terrorism as a primary tool of its foreign policy to wreak chaos and spread an ideology of hate.

Against this backdrop, keeping our homelands and people safe from terrorism, still requires a tremendous amount of work and a coordinated whole-of-society strategy.  Among the most important parts of that strategy will be defeating the ideology, preventing radicalization, and rehabilitating those already committed to extremism.   Governments cannot do this alone: civil society and the private sector must be part of the solution.

The OSCE plays a constructive international and regional role to counter extremism, and we deeply appreciate the OSCE’s wide-ranging prevention initiatives.  For example, with our support, the OSCE is conducting a series of scenario-based seminars and tabletop exercises to build interagency collaboration and promote the OSCE’s concept of security in OSCE participating States.  We were also pleased to make a financial contribution to support the development of the OSCE’s handbook on pre-criminal interventions and referral mechanisms for the Western Balkans.  We are also strong supporters of the OSCE’s Leaders Against Intolerance and Violent Extremism training and capacity-building efforts, and we welcome other donors to consider supporting this OSCE flagship effort.

Crafting a successful prevention and de-radicalization architecture will include several key attributes.  First, we must put in place policies and programs to confront the influence of radical terrorist ideologies.  This means building local resilience to ideologies that are discriminatory, exclusionary, and intolerant through education that promotes critical thinking and understanding of all religious and cultural practices.  It means promoting credible voices that have the authority and legitimacy to undermine and discredit the terrorist ideology.  And it means preventing pernicious ideologies of hate from being spread by foreign actors within our own borders.

The technology industry also has a role to play in ensuring that terrorists do not use the internet to propagate extremist ideas.  Terrorism did not start with the Internet.  But terrorist groups have certainly become masters at using the Internet to recruit followers and inspire violence and hate.

Governments should not seek to coerce technology companies into operating a certain way, but rather we should collaborate with technology companies to find mutually valuable solutions.  We will be hosting a side event at 12:45 today on this topic, which will include participation from Facebook, Google, and civil society leaders, so we would welcome the opportunity to continue the discussion on this then.

The next attribute for a successful prevention strategy is developing local solutions with local buy-in.  These solutions include after-school programs for at-risk youth, training educators and mothers to identify the early signs of radicalization, and training police officers on how to pro-actively engage and build trust with local religious and community leaders. This work is essential and effective, but there is still more we can do locally.

This is why we support the Strong Cities Network, which brings local leaders, civil society, and communities from more than 123 cities across six continents together to share good practices on how to prevent radicalization and manage responses to terrorism in their communities.  I know we already have many cities from your countries who have joined the Strong Cities Network, so thank you.

Finally, and most urgently, we must take responsibility for those who have radicalized and engaged in violence, including going over to fight for ISIS in Syria and Iraq.  It is imperative for international safety and security that governments take back and prosecute their foreign terrorist fighters in detention in Syria, as well as their family members in IDP camps.  The United States has repatriated four adults and four children from Syria and Iraq.  The adults have all had charges brought against them, and one has received a 20 year prison sentence.  We commend our partners in the room today who have committed to taking back their foreign terrorist fighters and family members, and are especially grateful for the leadership of Kazakhstan and North Macedonia who have set an example for the rest of the world to follow.  Repatriation and prosecution is the best way to ensure that these terrorists never return to the battlefield.

However, convicting terrorists is only part of the solution.  The other part is ensuring that terrorists do not radicalize other inmates while in prison by ensuring proper prison management.  In addition, rehabilitation programs inside prisons and prisoner reintegration efforts are vital. The history of al-Qa’ida and ISIS, with many of its leaders and theological forefathers being radicalized in prisons, should serve as a powerful warning to us all about the importance of proper prison management and rehabilitation and reintegration.

As I lay all of this out, I am under no illusion that any of this will be easy.  We face a complex, diffuse, and formidable global threat.  But with global cooperation – the type that is emblematic of the OSCE – and with a tremendous amount of hard work and commitment, we will achieve enduring victory in our shared fight against terrorism.