Home Home | News & Events | On the Terrorist Attack in Nice, France | Statement to the PC 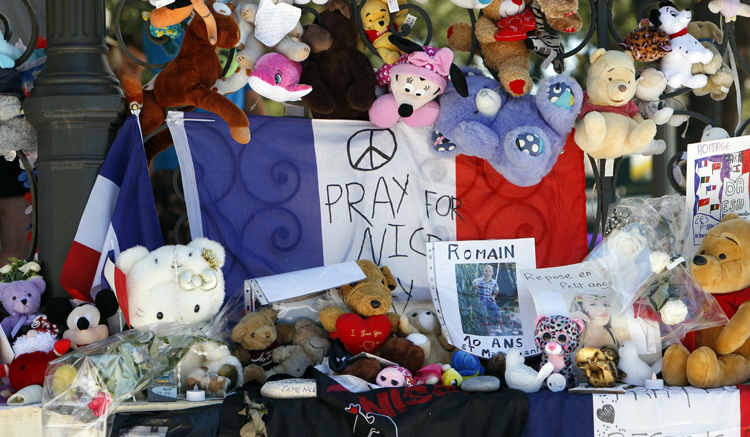 Dolls and teddy bears are placed at a memorial in a gazebo on the Promenade des Anglais in Nice, southern France, Wednesday, July 20, 2016. (AP images)

The United States condemns in the strongest terms the horrific terrorist attack that occurred on July 14 in Nice, which killed 85 people and wounded dozens of innocent civilians. Our thoughts and prayers are with the families and loved ones of those killed, and we wish a full recovery for the many wounded. President Obama spoke by phone with President Hollande to offer his heartfelt condolences on behalf of the American people to the people of France, and offered any assistance France may require in its efforts to investigate and recover from this tragic loss of life.

President Obama noted that this terrible attack was particularly heinous given that it occurred on Bastille Day. We are reminded of the universal values which Bastille Day represents. We are reminded of the extraordinary resilience and democratic values that have made France an inspiration to the entire world, and we know that the character of the French Republic will endure long after this devastating and tragic loss of life. The United States stands in solidarity and partnership with France, our oldest ally, as the French people respond to and recover from this terrible attack.

We also express our condolences to Turkey over the loss of life that occurred there. We understand the Permanent Council will take up the troubling situation in Turkey during our meeting tomorrow.